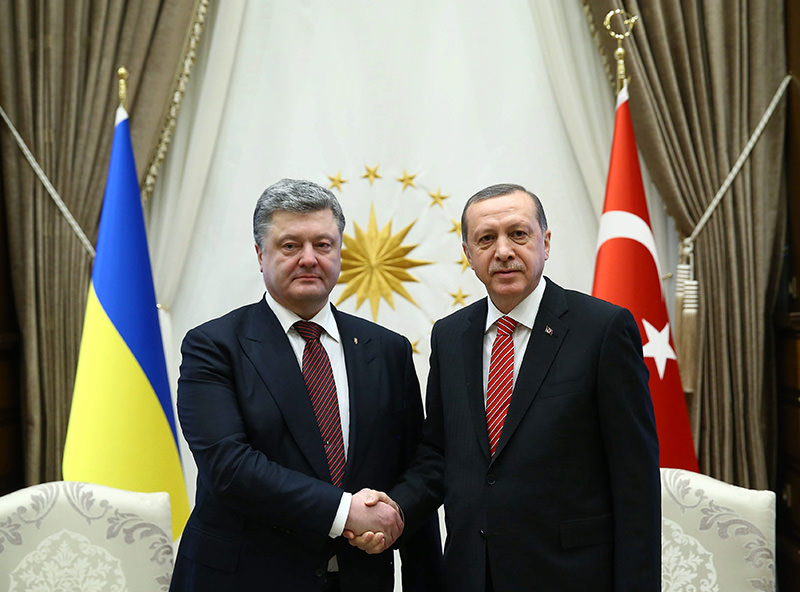 by Daily Sabah with AA Mar 09, 2016 12:00 am
President Erdoğan said in a speech on Wednesday with his Ukranian counterpart Petro Poroshenko that Turkey has not recognized Russia's unlawful annexation of Crimea and will not recognize it from now on.

Erdoğan also added that the country supports the Minsk protocol and calls for the withdrawal of foreign troops from Ukrainian territory.

Criticizing Russia's intervention in Ukrainian territory, he said "Russia used the argument 'Syrian government called for our help' before starting aerial strikes on Syria. Then I ask Russia, who called on you to enter [eastern] Ukrainian territory?"

He also rejected Russia's intervention in Syria on the pretext that it was made on the call of the Syrian regime.

He noted the plight of Crimean Tatars following the annexation, who live under occupation and hard conditions.

"We are supposed to keep [the issue of] violations of rights of all sects facing similar problems in Crimea on international agenda?We will act in cooperation, through steps within diplomacy and law for overcoming the unlawful situation in Crimea.

"We believe the crisis in eastern Ukraine can be solved with just peaceful and diplomatic methods," he said.

He called on all sides to cease-fire, rid the Ukrainian soil of foreign soldiers and re-establish control at the Ukrainian-Russian border.

Erdoğan also touched upon trade between the both countries and stated that they aim to increase bilateral trade volume to $20 billion by 2023.

"The total population of Turkey and Ukraine is about 125 million; this is a serious market...we can reach this number," he said.

He also said the two countries should conclude their bilateral Free Trade Agreement.

"We should renew our agreements of preventing double taxation with protection and mutual incentive of very important investments," he added.

The two leaders also inked agreements to boost ties in trade, security, military and media as well as transportation, tourism, energy and culture.

Erdoğan also praised the reforms and the economic renewal process being led by Poroshenko in Ukraine and said that Turkey would continue to support Ukraine.

"A strong Ukraine, which has fortified its political stability, is also a guarantee for regional peace and order," he said.

"On this point, all countries should support Ukraine and further increase its current contributions," he added.

In his remarks made at the joint press conference, Poroshenko said he was ready to swap with Moscow the Ukrainian pilot, Nadia Savchenko, who has been imprisoned by Russia since June 2014.

"I want to say for the first time that I am ready to do the swap so that Savchenko returns to her homeland by using my constitutional right as president," he said, adding that Moscow was yet to answer to Ukraine's swap offer.

Savchenko, who voluntarily joined the operations against pro-Russian separatist in east Ukraine, was taken as hostage by the so-called Lugansk People's Republic separatists in Lugansk region June 2014 and then taken to Russia.

She is accused of acting as a spotter for the Ukrainian army's mortar attacks that killed two Russian journalists in east Ukraine.

By January 2015, the Minsk Protocol ceasefire completely collapsed. A new package of measures aiming to stop fighting in Donbass, called "Minsk II", was agreed to on February 12, 2015.
Last Update: Mar 10, 2016 1:01 am
RELATED TOPICS