PYD/YPG not invited to next round of Syria peace talks in Geneva, US State Dept. spokesman Kirby says 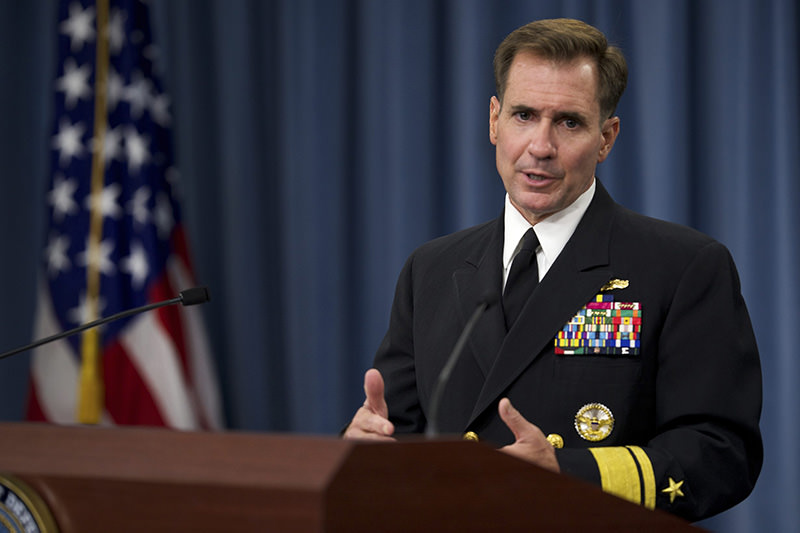 U.S. State Department spokesman John Kirby said on Friday that the PYD/YPG terrorist group has not been invited to participate Syria peace talks in Geneva, which will be held on March 14.

"As I understand it, the invites for this next round of talks, like the last round, doesn't include the PYD as an invitee," said Kirby during daily press briefing in Washington.

Although Kirby confirmed PYD/YPG has not been invited to the talks, he also stated that there have been open communication channels with all the groups, including the PYD.

Russian Foreign Minister Sergey Lavrov on Friday called for PYD/YPG to be included in the talks. Kirby added that the U.S. is comfortable at the moment with the United Nations' Syria envoy Staffan de Mistura's decision not to include the PYD/YPG in Geneva peace talks.

Turkey has voiced its concern over PYD/YPG group in Syria as it constitutes a national security threat on Turkey's southern border.

Meanwhile Kirby also stated that there have been violations to the ceasefire by Syria's Bashar Assad forces and Russia was urged to use influence over Assad regime to stop the hostilities.

"We also strongly condemn reports today that the regime has conducted airstrikes which struck civilian protesters in Aleppo and Daraa, including the Arbayen mosque as the congregation was leaving. Now, these are clear violations of the cessation of hostilities and of the express commitment by the Assad regime to the United States and Russia as ceasefire task force co-chairs to provide full humanitarian access and to abide by the cessation of hostilities," Kirby said.

"Attacks against civilians and the denial of humanitarian aid needs to stop immediately, and we urge all parties – particularly Russia – to use its influence with the Assad regime to make this happen," he added.

According to Reuters, speaking on condition of anonymity, a U.N. Security Council diplomat said some major Western powers, not only Russia, have also been considering the possibility of a federal structure for Syria and have passed on ideas to de Mistura.

"While insisting on retaining the territorial integrity of Syria, so continuing to keep it as a single country, of course there are all sorts of different models of a federal structure that would, in some models, have a very, very loose center and a lot of autonomy for different regions," the diplomat reportedly said.

In addition, de Mistura said on Thursday in an interview with Al Jazeera that "all Syrians have rejected division (of Syria) and federalism can be discussed at the negotiations."

Meanwhile, a federal structure of government for the post-Assad Syria is not an option welcomed by the opposition.

"Any mention of this federalism or something which might present a direction for dividing Syria is not acceptable at all. We have agreed we will expand non-central government in a future Syria, but not any kind of federalism or division," Syrian opposition coordinator Riad Hijab according to Reuters report.

Kirby also stated that the opposition's decision to participate in the talks was welcomed by the U.S.

Syria's main opposition body, the High Negotiations Committee, said Friday that it would attend indirect peace talks with the Bashar Assad regime on March 14 in Geneva.

In a statement distributed to reporters, the HNC said it would participate in the negotiations as part of its "commitment to international efforts to stop the bloodshed and find a political solution."