Turkey being destabilized from US by Gülen: former Pentagon spokesman 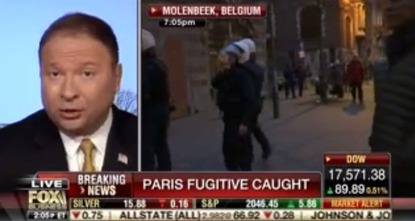 A former Pentagon spokesman and a retired U.S. navy commander, Jeffrey D. Gordon said on Friday that Washington should send back Fethullah Gülen, the leader of the Gülen Movement, which is referred to by the Turkish government as a shadowy organization and accused of constructing parallel societies in various countries.

Speaking to Fox News channel about the arrest of the Paris attacks suspect Salah Abdelsalam in Brussels, Gordon said the U.S. should cooperate with Turkey, which accommodates more than 2.5 million Syrians, in the fight against global terrorism.

"Turkey has been destabilized from the U.S. right now, because of Fethullah Gülen. He owns America's largest charter school network. Turkey issued an arrest warrant for him after he tried to topple the government and replace with a theocracy like in Iran. America outed to deport him, we don't need him in here," Gordon said.

Gordon also mentioned FBI's investigation on Gülen's charter schools for the improper use of the visa system and said he [Gülen] could be deported through the federal case against him over various allegations of improper use of public financing and contracting and salary practices for thousands of imported young male teachers.

The Gülen Movement, which has seen its members and sympathizers purged from state institutions, including the police and judiciary, was designated by authorities as a national threat, a classification for terrorist organizations. A string of judicial inquiries over the past two years has revealed the seedier side of the movement, promoting itself as a charity group that runs schools and works for interfaith dialogue.

Gülenists are accused of illegally wiretapping thousands of people, from the prime minister to journalists and other prominent figures. They are also accused of imprisoning critics or anyone seen as an obstacle to the movement's attempts to gain further clout through sham trials.

Hundreds of generals, academics and others were detained for years in cases in which they were accused of attempting to stage coups. It was later revealed that they were detained on charges based on false evidence planted by Gülenist members of law enforcement.