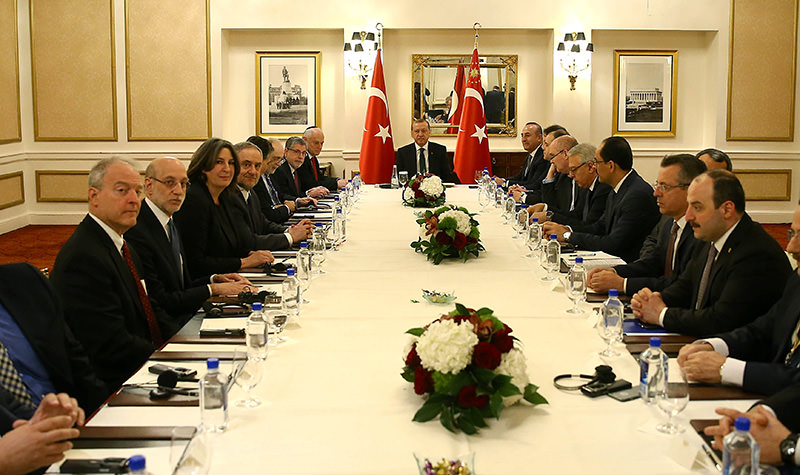 President Recep Tayyip Erdoğan received on Wednesday a delegation comprising of the members of Jewish associations in the United States. During the meeting, Erdoğan stressed the need for cooperation against anti-Semitism and Islamophobia rising in the West.

According to the information obtained from presidential sources, in the meeting that took place in the St. Regis Hotel in Washington D.C., the president was accompanied by the Turkish Minister of Foreign Affairs Mevlüt Çavuşoğlu, Minister of Energy and Natural Resources Berat Albayrak and Minister of Youth and Sports Çağatay Kılıç.

In the meeting, recent terror attacks in Turkey and Belgium, the war against terror, Turkey's relations with Jews, the relations between the U.S., Israel and Turkey, the situation in Palestine, the refugee crisis, anti-Semitism and Islamophobia were discussed.

Pointing to the rise of racism in the West, "Unfortunately, anti-Semitic, Islamophobic and xenophobic movements have been taking center stage in politics. We have to fight against those hatred-based movements in a cooperative manner," Erdoğan said.

President Erdoğan also mentioned his phone call with his Israeli counterpart Reuven Rivlin. Presidential sources further added that the representatives of the Jewish associations expressed their gratitude towards Turkey for the Israeli victims of the terror attack in Istanbul's Istiklal Avenue, perpetrated by the Daesh terrorist organization. The representatives also extended their condolences to Erdoğan for the victims of the ecent terror attacks in Ankara and Istanbul.