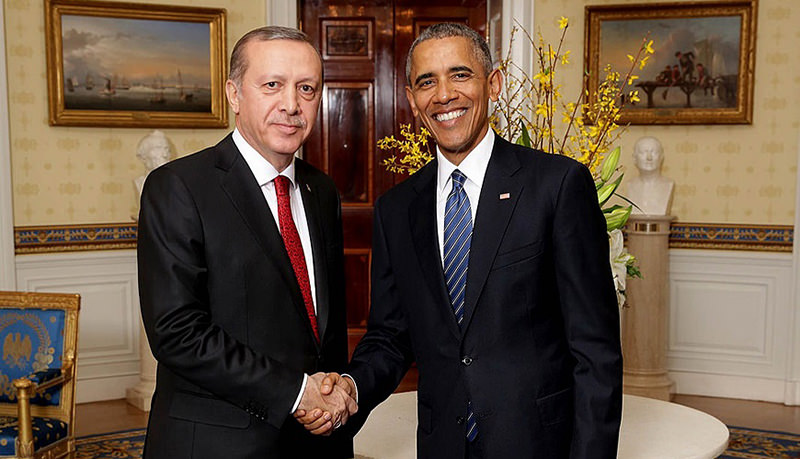 President Recep Tayyip Erdoğan met with U.S. President Barack Obama on Thursday. Their discussion focused on U.S.-Turkish cooperation on regional security, the fight against terrorism and refugees. The two leaders met at the White House on the margins of the Nuclear Security Summit, the Turkish presidential office said. The statement also said: "The leaders also discussed how to advance the two countries' shared efforts to degrade and destroy DAESH." The White House said in a statement after the meeting: "The president extended condolences to President Erdogan on behalf of the American people for those killed and injured in today's terrorist attack in Diyarbakir, and reaffirmed the support of the United States for Turkey's security and our mutual struggle against terrorism." Speaking at the Brookings Institute before his meeting with Obama, Erdoğan called on the international community to take the same on against the PKK-linked Democratic Union Party (PYD) and its armed People's Protection Units (YPG) as they do on other terrorist organizations, asserting that the group's fighters are as dangerous as those in DAESH.

"Claiming the PYD and YPG are good terrorists because they are fighting against DAESH is unacceptable. These are organizations that are auxiliaries of the PKK," Erdoğan said.

He said that the PKK, which has fought DAESH in Syria and Iraq, was serving its own purpose. The United States has worked closely with the PYD and YPG in its fight against DAESH. "The international community should collaborate against all terrorist groups – the PYD, al-Nusra Front, Boko Haram, DAESH – with the same level of earnestness," he demanded.

Yet while speaking to CNN's Christiane Amanpour, he also complained about how Turkey was left alone in its counterterrorism fight, adding that Ankara's expectations from European countries about intelligence sharing could not be met.

"We have been calling on nations for a common stance against terrorism, and many of the EU member states seem to have failed to attach the significance that this call for action deserves," he said. Accusing Belgium of attaching no significance to the information that Turkey conveyed about Ibrahim El Bakraoui, one of the bombers in the recent Brussels attacks, he said cooperation in the fight with the EU is crucial.

On March 23, President Erdoğan said that Turkey had previously deported one of the Brussels terror attackers and had notified Belgian authorities. The Presidency identified the Brussels attacker who was deported by Turkey in June as Ibrahim El Bakraoui.

Speaking at a press conference, Erdoğan said that Turkey had caught one of the Brussels attackers in the southeastern province of Gaziantep in July 2015 and deported him, but released him as Belgium did not establish that the suspect had terror links.

"The Belgian embassy was notified on July 14, 2015, about the deportation of the attacker, who was later released by Belgium," Erdoğan said, adding that Belgium could not establish that the suspect had terror links, despite Turkey's warnings.

Erdoğan added that the Netherlands was also involved in the matter, as the suspect was deported to the Netherlands at his own request, and the Dutch authorities were also informed about the incident.

Belgium was shaken after Erdoğan's press conference. Belgium's interior and justice ministers offered their resignations but these were rejected by Prime Minister Charles Michel, reported Belgian media. Interior Minister Jan Jambon said on a TV program that Michel had asked him to stay on, stating: "In times of war, you cannot leave the field."