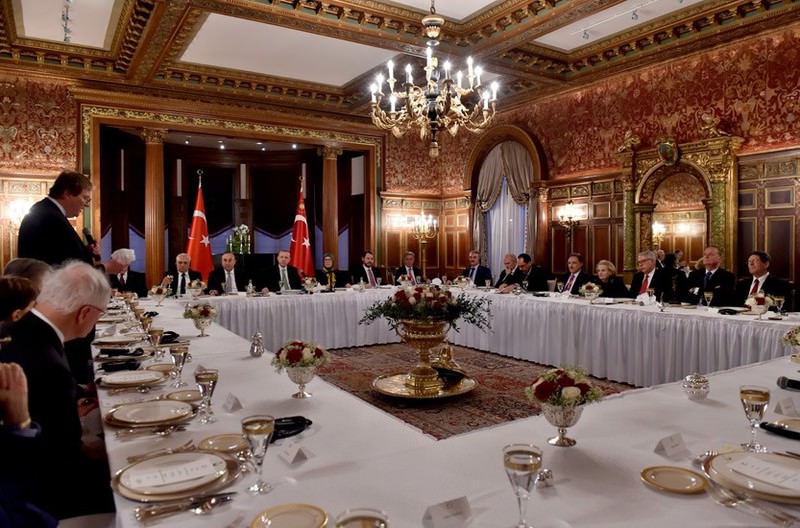 President Recep Tayyip Erdoğan made a statement Friday on Turkish press freedoms and took a question-and-answer session while meeting a number of prominent Washington figures over dinner.

The meeting was held behind closed doors and the content of the discussions were strictly off-the-record. However a senior source at the Turkish Embassy said that President Erdoğan showed the attendees two different presentations on the freedom of the media in Turkey. The first presentation focused on sentences given to people in the U.S., Germany and France over insulting or threatening heads of state. President Erdoğan's lawyers have sued over 1,800 people so far for insulting him. Turkish criminal law, which was ratified before Erdoğan's term, criminalizes insults against the Turkish head of state. The Turkish source said the second presentation showed Turkish front pages where Erdoğan had been depicted as a dictator or threatened with hanging. Erdoğan underlined the fact that many newspapers in Turkey openly call him a dictator and face no consequences.

Former U.S. Ambassador to Ankara Francis Ricciardone said that the dinner conversation was candid yet respectful. "I don't think either side changed the other's mind, but at least everyone listened respectfully to the other's views. And so, perhaps each side found itself better informed about the other's perspective " he said.

Turkish and American bilateral relations are going through a tense time due to major disagreements over Syria where Syrian Kurdish PKK off-shoot group the Democratic Union Party (PYD) holds large swaths of territory thanks to U.S. air support. On top of this, President Obama has criticized President Erdoğan's handling of the press and said that he personally sees a troubling pattern in Turkey that can take the country "down a troubling path."

With elections just around the corner in the U.S., people in Turkey are beginning to wonder what the next president's foreign policy will be regarding the country and the region.

"I have no doubt that whoever becomes our next president, she or he will fully appreciate Turkey's pivotal importance in regional and world affairs, " Ricciardone said.

He believes, despite vexing bilateral relations, the depth of shared interests and complementary capabilities to help both countries will continue in their relationship. He said, "We are partners, neither patrons or clients."