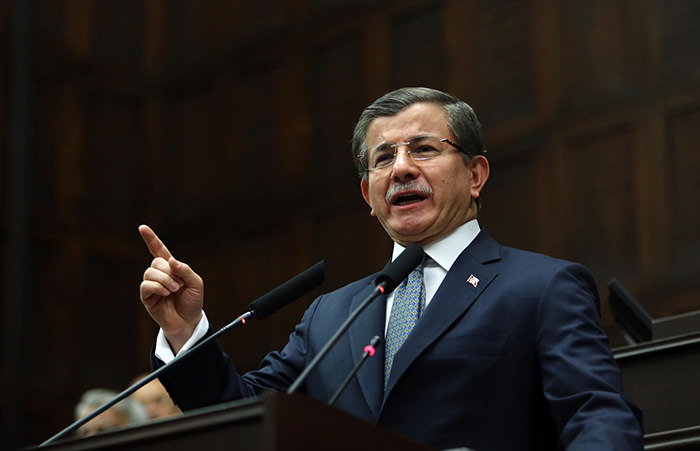 by Daily Sabah Apr 05, 2016 12:00 am
Prime Minister Ahmet Davutoğlu said on Tuesday that Ankara stands by Azerbaijan over the Nagorno-Karabakh conflict with Armenia.

Speaking to party members during the Justice and Development (AK) Party group meeting at the Parliament, Davutoğlu offered his condolences to Azerbaijan for the killed soldiers during the recent clashes.

"The whole world should know that Turkey and Azerbaijan will stand together shoulder to shoulder till the end. Each soldier martryred in Azerbaijan is our martyr. We will stand by Azerbaijan until all of its land, including Nagorno-Karabakh, is liberated."

Meanwhile, President Recep Tayyip Erdoğan Monday repeated his assertion that Turkey backs Azerbaijan in its struggle against Armenian militias that continue their attacks in the disputed Nagorno-Karabakh region despite the unilateral cease-fire declared by Baku. Speaking at the Turkish Red Crescent Council, Erdoğan said: "The fire of Armenia's massacres in Karabakh continues to burn in our hearts." Touching on the killing of 12 Azerbaijani soldiers by Armenian militias, he said: "Karabakh will surely be returned to its rightful owner, Azerbaijan, one day."

Turkey has declared its support for Baku since the clashes broke out in Nagorno-Karabakh. Ex-Soviet states Azerbaijan and Armenia fought a war over Nagorno-Karabakh in the 1990s that ended with a fragile truce. That was broken over the weekend with the most ferocious fighting in years, killing dozens of people on both sides.

Although Azerbaijan declared cease-fire, Armenian militias continued to attack Azeri military units. Armenia threatened Azerbaijan and said if the clashes continue it would formally recognize Nagorno-Karabakh as independent from Azerbaijan, and formalize Armenian military aid to the separatists.

Accounts from Azerbaijan and the ethnically Armenian separatist forces on Monday indicated that fighting was less intense than at its peak on Saturday. But there was no sign that the flare-up in fighting could be quickly contained, despite calls from world powers for an immediate halt to the fighting.