Erdoğan: Supporters of terrorism should be stripped of their Turkish citizenship 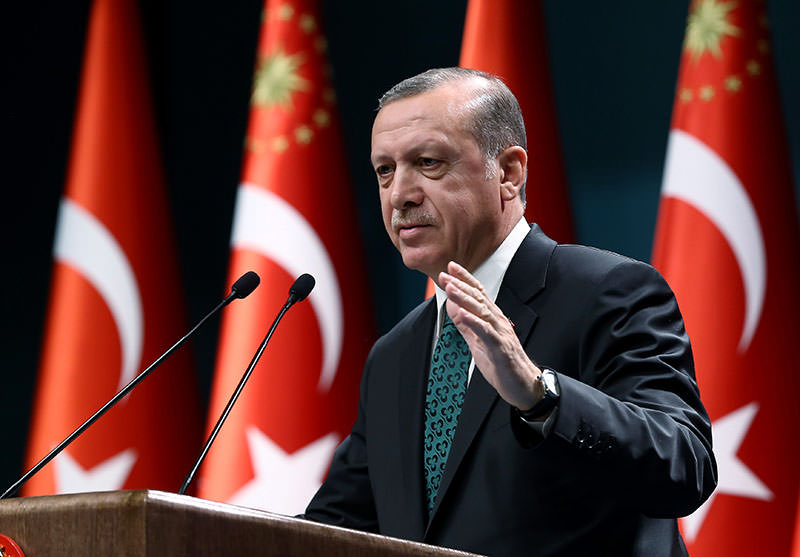 In remarks made during a meeting with attorneys at the presidential complex in the capital Ankara to mark the Lawyers' Day Tuesday, Erdoğan said there is a need to annihilate adherents of terrorism through forceful measures.

"We need to be decisive to take all necessary measures, including stripping citizenship to deactivate terrorist organization supporters," he said, adding: "They are not even our citizens."

"We are not obliged to carry anyone engaged in the betrayal of their state and their people."

"Supporters (of terror) who pose as academics, spies who identify themselves as journalists, an activist disguised as a politician ... are no different from the terrorists who throw bombs," Erdoğan said.

"But like a wolf in sheep's clothing, they serve the same purpose as the members of the terror organisation. As a nation we need to be careful. No one must commit treachery against the state and the nation behind our backs."

But Prime Minister Ahmet Davutoğlu said the government was not planning "for the moment" to strip PKK supporters of their nationality.

"This idea is not ready," Davutoğlu told reporters during a press conference at the Ankara airport before his official visit to Finland Tuesday night

He said, "If a person aims to cause damage to a country's people by conducting terrorism, then they have already broken their moral connection with that country's people."

"No citizen of common sense can excuse actions of destroying their self as well as other people and undertaking terror attacks. Then their connection with that country must have been severed…We will take whatever action is necessary in the fight against terror, but the idea is not, at the moment, ready to be worked on," Davutoğlu said.

Justice Minister: Turkey to work on law to strip terror supporters of citizenship

Following the president's statement, Bozdağ said on Wednesday that Turkey will work on a law to strip supporters of terrorist organizations of their citizenship.

"Erdoğan envisages a new rule [for stripping citizenship]." His statement came during a public press conference. "Of course, we will begin work on this," he added.

The French government proposed a similar law to strip French citizens with dual-citizenship of their French citizenship. After the proposal was discussed in the French parliament, President François Hollande canceled the plan late in March. The idea had been proposed after the deadly Paris attacks in November. It drew furious opposition from segments of the left in France.

"I take note that part of the opposition is against all constitutional revision," Hollande said, adding, "I deplore, profoundly, this attitude; because we must do all that we can, under the current serious conditions, to avoid divisions." Overwhelmed by the Paris attacks in November, France has been under a state of emergency since January of 2015, which was extended by Parliament.

The PKK unilaterally broke a nearly two-year ceasefire in July, reigniting a conflict that has claimed more than 40,000 lives since 1984. The PKK is considered a terrorist organization by Turkey, the U.S. and the European Union.