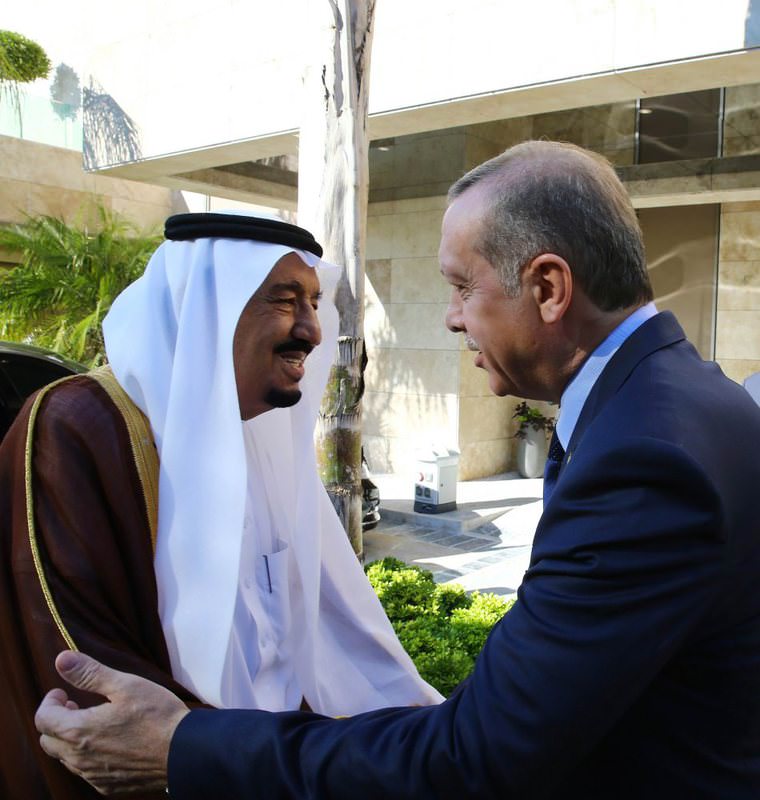 After the deadlock with Washington over the PYD, Ankara is in pursuit of collaboration with alternative actors such as Saudi Arabia and Israel through reconciliation talks and strengthening ties concerning regional issues

Following Ankara's dispute with Washington over using the Syrian PKK affiliate Democratic Union Party's (PYD) People's Protection Units (YPG) militia in the fight against DAESH, Ankara is trying to create space in the region by restoring and strengthening ties with several countries after a period of stalled relations.

While Ankara continues to voice its concerns regarding U.S. support for the PYD and YPG due to their close affiliation with the PKK, Washington, which recognizes the PKK as a terrorist organization like the EU and Turkey, does not share the same concerns but says it understands Turkey's concern.

The U.S. has called on the PKK to stop its armed campaign in the southeast but does not recognize the PYD as a terrorist organization. This has led to strained relations with Ankara and made Turkey seek alternative allies in the region, including Saudi Arabia and Israel.Saudi King Salman is currently paying a three-day visit to Turkey as part of the rising trend in bilateral relations after the death of his brother King Abdullah in January 2015 and his ascending to the throne. The country is also reportedly in efforts to help Turkey and Egypt re-establish diplomatic relations.

Turkey's negotiations with Israel to restore ties after the Mavi Marmara raid are also ongoing. The Foreign Ministry announced on Friday that a deal with Israel is expected to be finalized in a meeting soon.

"We should not consider this climate only through Turkey's lense. Other actors in the region are also seeking alternatives," Şaban Kardaş, the director of the Center for Middle Eastern Strategic Studies (ORSAM), said.

Speaking at the Rethinking Violent Extremism in the MENA Region" conference held jointly by Al-Sharq Forum and the Afro-Middle East Centre (AMEC) in Istanbul on Saturday, he indicated that Saudi Arabia and Israel are also following the same reconciliation strategy: "Saudi Arabia's prior efforts to corner Turkey and isolate the Muslim Brotherhood in the region also rebounded. They are carrying out reconciling with Turkey. "

Many prominent academics, bureaucrats and experts on the region were at the conference, including presidential spokesman İbrahim Kalın; a Justice And Development Party (AK Party) deputy and head of the Turkish delegation for the Parliamentary Assembly of the Council of Europe (PACE), Talip Küçükcan; Palestinian-British academic and political activist Azzam Tamimi and adviser to South Africa's Minister of International Relations Mohamed Dangor.

US insistence for short-fix solutions concerning

Touching on the reason for the changing climate in the region, Kardaş said the U.S.'s perspective of the region has changed and it has abstained from playing the necessary role in the region toward finding a solution for the growing crises.

"Since Washington does not play this role to find a solution in the anti-DAESH fight and Syrian crisis, it seeks to find short-fix solutions. Not only relations with Turkey are affected by this policy, but the future of Syria has also become turbulent."

Despite U.S. President Barack Obama's red line statement in 2012, Syrian regime forces continued to perpetrate humanitarian crimes including the use of chemical weapons in August 2013 in the Damascus suburb of Ghouta.

Amnesty International reported that the YPG, which is allegedly acting collaboratively with the Syrian regime, committed war crimes and human rights violations, but it did not force Washington to change its policy in Syria for the sake of the anti-DAESH fight. Turkey defines the YPG as a national security threat.

Senior lecturer in security studies at the University of Exeter, Omar Ashour, who also spoke at the conference, said both Turkey and Sunni Arab fighters see the YPG as a threat due to its expansionist policies in northern Syria.

"[The] main alternative is pro-revolution fighters in Syria regardless of their background. In January 2014, five governorates were consequently saved from DAESH by Sunni Arab and Turkmen fighters in less than 3 weeks. YPG with Western aerial and intelligence support could have removed Daesh from 1/3 of a governorate in about a year," he said.

"If they have a centralized structure with the potential assistance of Turkey, they might be good partners on the ground," he added.

He said: "Despite Turkey being bothered with Washington's policies, it has not forged an anti-U.S. campaign. NATO and Washington still primarily constitute Turkey's security strategy."

Regarding Saudi Arabia's role in a potential restoration of ties between Turkey and Egypt, David Hearst, the editor of the Middle East Eye, acknowledged that there have been conversations between Salman and President Recep Tayyip Erdoğan about Egypt in their previous meetings. Erdoğan also wants the release of political prisoners.

He added, however, that not much should be expected regarding Saudi mediation: "Salman's view was Egypt has always been run by field marshals. I am not so sure that has changed."

"They will support [Egyptian President Abdel-Fattah] el-Sissi since they have no alternative. However, if a military alternative appears, Saudis would not prevent it," he said, and added that Salman is much more pragmatic than his brother.

Erdoğan had previously said in February that he is not against the continued close ties between the people of Turkey and Egypt and he had told intelligence officials and ministers that they could continue their meetings with their Egyptian counterparts. "Our ministers may meet. However, it would be improper for the prime ministers to meet. I was of this opinion when I was prime minister. I believe, as people who believe in democracy, we can have no other stance on a person who toppled a democratically elected head of state."

Dalay also said such steps to restore ties with Egypt are not normalization or rapprochement, but rather the re-establishment of diplomatic relations.

"Normalization requires having societal legitimacy. Forming relations with Egypt is like taking a pill as an obligation, it does not necessarily legitimize the Sissi administration. I mean President Erdoğan or Prime Minister Ahmet Davutoğlu would never shake hands with Sissi."