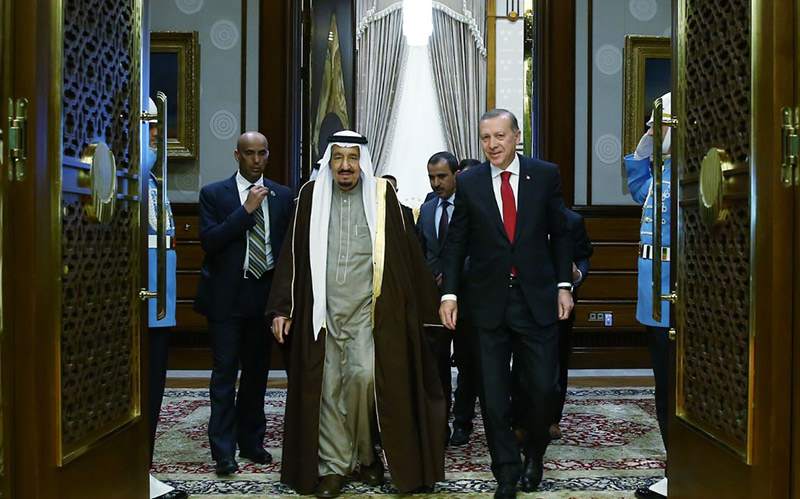 Erdoğan and King Salman discussed bilateral issues as well as regional matters, particularly the conflict in Syria, a presidential source said under usual conditions of anonymity.

The meeting at the Presidential Complex saw both leaders agree to maintain current levels of cooperation between the regional powers as well as to step up economic ties, particularly investment.

Earlier, Erdoğan presented the monarch with the Order of the State, Turkey's highest award to foreigners.

Commenting on the visit, analysts told Anadolu Agency that regional problems such as Syria and Iran's growing influence were likely to lead discussions.

Burhanettin Duran, a political scientist at the Foundation for Political, Economic and Social Research, said the two countries would attempt to overcome obstacles by "strengthening bilateral relations".

He added that the relationship between Turkey and Saudi Arabia had not reached a "strategic dimension" but were "proceeding in the right way".

Duran said Erdoğan would be looking for Saudi assistance in applying pressure on Egypt to ease President Abdel Fattah al-Sisi's oppression of the Egyptian opposition.

Şaban Kardas, president of the Center for Middle Eastern Strategic Studies, said Turkish-Saudi relations had been solidified under King Salman, who ascended to the throne in January last year.

Saudi Arabia's search for allies has been underlined by the kingdom's military intervention in Yemen, he said. Iran's rehabilitation following this year's nuclear deal has also triggered the need for alliances.

One the economic front, Duran said Saudi Arabia and Turkey were both seeking cooperation in areas such as agriculture and tourism.

Saudi King Salman arrived with a large delegation on Monday in Ankara to start his three-day diplomatic engagement with Turkey.

President Recep Tayyip Erdoğan received him at the airport, a gesture in response to Salman's receiving Erdoğan during his visit to Saudi Arabia in April last year.