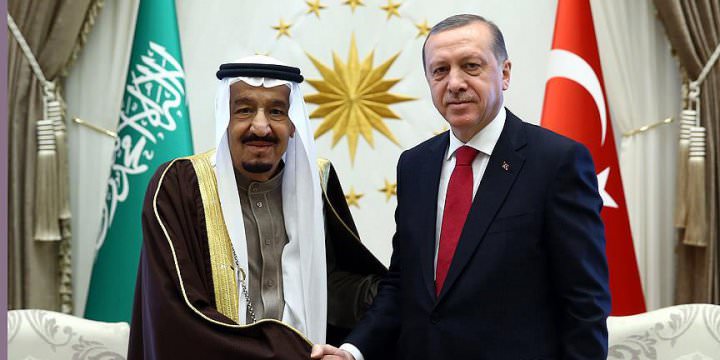 Since King Salman of Saudi Arabia succeeded to the throne, the kingdom's relations with Turkey have entered a new era with more dynamic cooperation between the two regional powers. Both countries have more in common than differences regarding foreign policies, and their leaders are looking for ways to implement game-changing strategies in the region. The two regional allies, both of whom are member of the G20 and hold strong positions in the Organization of Islamic Cooperation (OIC), have developed close relations in recent years on issues like the ongoing civil wars in Syria and Yemen as well Iran's role in regional conflicts.

Attempts to recover relations were first unveiled when President Recep Tayyip Erdoğan attended the funeral of King Abdullah in January 2015. After Saudi officials announced the king's death, Erdoğan suspended his African tour for a day and traveled to Saudi Arabia. A day of mourning was also declared in Turkey following Abdullah's death. These gestures were perceived to be indications that Turkey was eager to leave political disagreements aside and foster closer bilateral relations.

Since Abdullah's death, Ankara has continued to maintain strong relations with Salman, the new king. Erdoğan visited Saudi Arabia in March 2015 in what was described by political analysts as an attempt to mend relations between the leaders of the two countries. In December, Turkey and Saudi Arabia reached an agreement to establish a high-level strategic cooperation council to strengthen military, economic and investment cooperation. Salman was received by Erdoğan at the Ankara airport, a gesture in response to Salman receiving Erdoğan during his visit to Saudi Arabia last April. Salman was awarded the Order of State by President Erdoğan, who said the order shows Turkey's high level of appreciation for their countries strengthening ties. "My dear friend, since you succeeded to the throne in Saudi Arabia, you have contributed a lot to strengthening friendly relations with our country," Erdoğan said, expressing his appreciation for the two countries' mutual stance on developments in the region. Salman thanked Erdoğan and said his country's relations with the state and the people of Turkey are worthy of commendation.

Turkey and Saudi Arabia differ on relations with Egypt, where the democratically elected president, Mohamed Morsi, was toppled in a coup led by current President Abdel-Fattah el-Sissi in 2013. Release of imprisoned political figures is seen as a possible step toward initiating Turkey's normalization with Egypt.

As Syria and Yemen, both hit by devastating civil wars, are being further destroyed with sectarian clashes, there are now more voices that expect Turkey and Iran to open communication channels to combat sectarianism.

Despite being on the opposite sides in Syrian civil war, the two countries have close economic ties and are expected to bolster relations once a transitional government takes power in Syria.
RELATED TOPICS