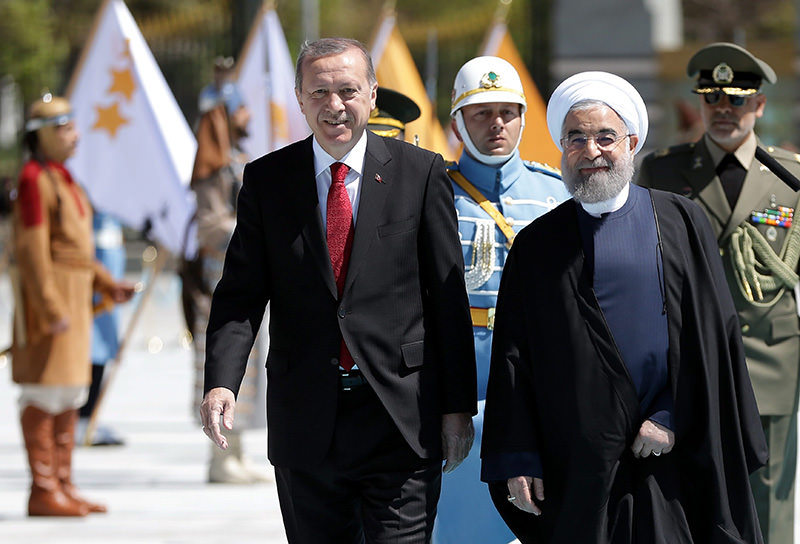 President Recep Tayyip Erdoğan has welcomed Iranian President Hassan Rouhani with an official ceremony at the Presidential Palace in the capital Ankara on Saturday.

The two leaders have started a bilateral meeting. Rouhani will also attend will attend the third meeting of the Council on High-Level Cooperation between Turkey and Iran.

Meanwhile, Turkey and Iran should lead the way to ending violence in Iraq, Syria and the region, President Erdoğan said on Saturday during at a joint news conference along with his Iranian counterpart, Hassan Rouhani, after the meeting.

Erdoğan said that strengthening political dialogue between two countries and minimizing differences of opinion are in favor of both Turkey and Iran.

"We should work together for tackling the problem of sectarianism and terrorism that have occurred in our region," Erdoğan said.

Pointing to several differences of opinion between Turkey and Iran on regional issues, Erdoğan said: "However, I want to gladly express that we are of the opinion that the bloodshed in the region should be stopped".

In his remarks, Erdogan urged avoiding sectarian approaches to regional developments, saying that doing so has a destructive impact. "We are supposed to be together under name of Islam and walk to the future with unity and solidarity, which is distinctive for us," he added.

On international cooperation against terrorism, Erdoğan called for zero tolerance for terrorists. "We share the understanding that no 'good terrorist/bad terrorist' distinction can be made."

For his part, Rouhani said the meeting with "my brother Mr. Erdoğan" saw a comprehensive discussion of bilateral relations.

"The economies of Iran and Turkey are complementary," said Rouhani, adding that his country and Turkey should take swift action to boost trade between the two countries in the wake of the lifting of sanctions over Tehran's nuclear program.

"How happy it is that this session happened at a period [after] the embargo was lifted, preparing an environment and foundation for improving cooperation between our two countries in various domains.

"To reach this aim, we have to accelerate [cooperation] and remove all hurdles in the way," Rouhani added.

Rouhani said Muslim countries in the region face many issues, adding: "We are supposed to help all these countries maintain security and stability. This is both a religious duty and one on behalf of the Islamic world".

He added, "We might have differences on very small issues, and think differently, which is very natural. In order to hold negotiations and cooperate further, for the region's countries and especially for relations between our two countries, we are ready, especially on fighting terrorism and promoting Islam to the world accurately".

"The official visit of the Republic of Iran's President Rouhani will contribute to and strengthen the political dialogue and cooperation with our neighbor, whom we share deep-rooted historical and cultural ties with" a statement by Turkey's Presidency said on Friday.

After being brought in from the cold following last year's nuclear deal with world powers Iran is being courted by both Europe and Turkey as a potentially lucrative market for trade and investment.

Turkey and Iran have close economic ties and are expected to boost relations despite differences on the Syrian crisis.

In early April, Turkey's Development Minister Cevdet Yılmaz said that a third of trade between the two countries is now conducted in the Turkish lira or the Iranian rial, allowing both nations to avoid exchange rate losses while reducing trade costs.

The meeting in Ankara comes a day after Iran came under fierce criticism from fellow heads of state from the Muslim world, who accused his country at a summit in Istanbul of supporting terrorism. Rouhani boycotted the closing meeting of the Organisation of Islamic Cooperation in protest at the rebuke.

Despite the rapprochement, Turkey and Iran remain on opposing sides of the five-year civil war in Syria.

Tehran backs Syria's Bashar al-Assad, while Ankara sees Assad's ouster as key to any resolution of the conflict and supports rebels fighting to overthrow his regime.

The war in Syria has pitted Shia-majority Iran against predominantly Sunni rival and Turkish ally Saudi Arabia, with both aiming to increase their dominance in the region by helping their preferred camps triumph on the battlefields in Syria and Yemen.

The two countries have also been embroiled in a diplomatic crisis since a mob in January set fire to Riyadh's missions in Tehran and Mashhad, Iran's second city, in protest at the execution by Saudi Arabia of a prominent Shiite cleric.