Erdoğan calls on world to unite against sectarianism, racism 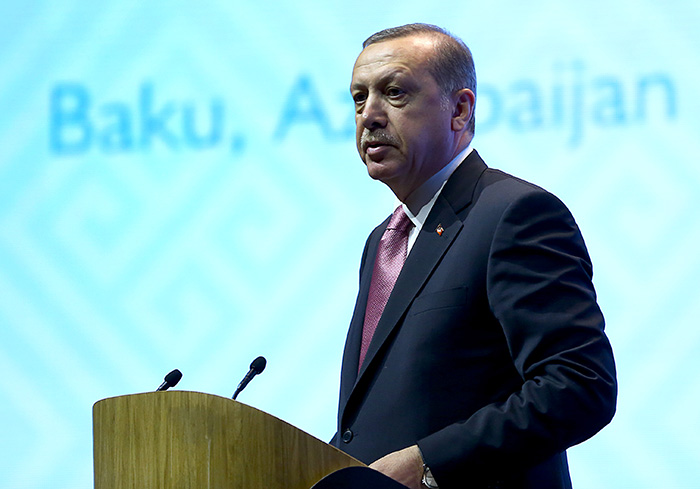 President Recep Tayyip Erdoğan said on Tuesday that the international community has failed to take a united and resolute stance against terrorism and called on the world to unite against sectarianism and racism.

Erdoğan was speaking at the seventh United Nations Alliance of Civilizations (UNAOC) Global Forum in the Azerbaijani capital of Baku. "As the international community, we are still very far from reaching goals that constitute the foundational aim of the alliance," he said, adding that the international community has also failed to overcome mentalities centered on prejudices, faiths, origins or cultures. "We also fail to show the common, resolved effort expected from us to fight radical movements and the terrorism fed by these movements."

The UNAOC aims to promote harmony and improve understanding and cooperative relations among nations.

"No faith, religion, culture or conscience approves of making an attempt on life. Islam, especially, is a religion whose name means peace. Would a religion whose meaning is peace allow terrorism?" Erdoğan asked. "Terrorism has no place in our religion, and organizations such as DAESH, which emerged in the name of Islam, have nothing to do with Islam," Erdoğan asserted.

Turning to the Syrian civil war, which has killed more than 500,000 people, Erdoğan said Syria is suffering from state terror. "A terrorist that kills his countrymen with barrel bombs, shells and tanks is in charge," Erdoğan said, referring to Syria's Bashar Assad.

"These people have been dying in Syria for six years. Just in the Aegean and Mediterranean Seas, the number of people we rescued has reached 100,000," he said, adding that Turkey has taken in 3 million Syrian and Iraqi refugees, and to date has spent over $10 billion helping them.

"We will continue opening our doors to those escaping bombs," he said, "because we cannot leave those people to their death."

He said the world has failed to take a united stance against the pain caused by "bomb after bomb that exploded in Syria, Iraq, Nigeria, France, Pakistan, Turkey and Belgium."

"We failed to find a solution to political disputes, injustices and inequalities that spawned an environment of violence," Erdoğan said.

He said the world should work for peace with a joint fight against sectarianism, racism and terrorism.

"We must view members of all races as human beings and love them. Here, this constitutes the basis of peace in the world," he said.

Erdoğan, who was in Baku to attend the UNAOC, discussed bilateral relations and agreed to strengthen cooperation in energy. The two leaders reportedly said that the UNAOC forum will contribute to international cooperation efforts.

They also discussed the conflict in Nagorno-Karabakh region and Erdoğan once again showed Turkey's position alongside Azerbaijan.

Turkey has declared support for Baku since the clashes broke out in the Nagorno-Karabakh region. The former Soviet states of Azerbaijan and Armenia fought a war over Nagorno-Karabakh in the 1990s that ended with a fragile truce. In remarks earlier this month, Erdoğan said: "Karabakh will surely be returned one day to its rightful owner, Azerbaijan."