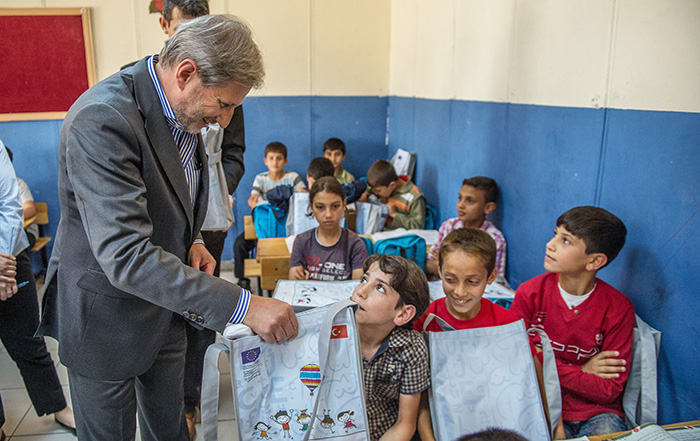 European Commissioner Johannes Hahn paid a visit to a refugee camp in southeast Turkey on Tuesday, thanking the country for all it has done to provide for those fleeing the war in Syria.

"Prosperity means jobs, means opportunities, gives people hope," he said during a trip to the Harran refugee camp in Şanlıurfa province. "That's why I'm once again very, very grateful for what the Turkish authorities have done in the past five years.

"In particular, I would like to thank AFAD for all its work but also the international organizations. For us in the European Union...stability is the overarching goal."

Hahn, the EU commissioner for enlargement, met officials from AFAD, the Turkish government's Disaster and Emergency Management Authority, during a tour of the camp.

After witnessing a class of Syrian children learning Turkish, he said learning the language would help refugees better integrate into society.

Turkey is hosting 2.7 million Syrian refugees - the world's largest refugee population - and last year agreed a deal with the EU to relocate Syrian refugees to the union in exchange for migrants returned to Turkey from Europe.

The International Organization for Migration said in a statement on Tuesday that the resettlement of 350 Syrians from Turkey to Europe was facilitated last week and that another 300 would be arranged this week.

"The 350 already moved under the "1 for 1" arrangement have left Turkey for Austria, Denmark, Germany, Netherlands, Sweden and the United Kingdom. This week 200 more will go to France, 50 to Luxembourg and 50 to Finland," IOM said.

"Turkey is hosting about 2.9 million refugees, asylum seekers and people under temporary protection. The number of people in the region in need of international protection is overwhelming. This is not something one country or even one region can address on its own," Gvilava said.

"The whole international community needs to pull together to address the root causes and to offer more legal migration pathways. If we fail, then these vulnerable people may easily run out of options and be forced to choose dangerous, irregular migration routes," he added.