Resettlement of Syrians to EU picks up after Turkey-EU deal, IOM says 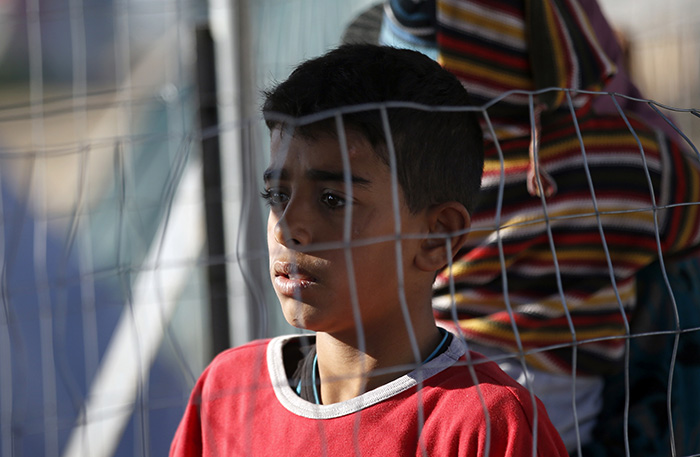 A refugee boy waits for food in the makeshift refugee camp at the northern Greek border point of Idomeni, Greece, Wednesday, March 30, 2016 (AP Photo)
by Daily Sabah Apr 26, 2016 12:00 am
The resettlement of Syrian refugees to European Union has picked up since the launch of EU-Turkey agreement on migrant returns and resettlement, International Organization for Migration said on Tuesday.

IOM said in a statement that the resettlement of 350 Syrians from Turkey to Europe was facilitated last week and that another 300 would be arranged this week.

"The 350 already moved under the "1 for 1" arrangement have left Turkey for Austria, Denmark, Germany, Netherlands, Sweden and the United Kingdom. This week 200 more will go to France, 50 to Luxembourg and 50 to Finland," IOM said.

"The accelerated pace of resettlements of Syrians to Europe over the past month is a welcome development," said Lado Gvilava, IOM Turkey Chief of Mission.

"Turkey is hosting about 2.9 million refugees, asylum seekers and people under temporary protection. The number of people in the region in need of international protection is overwhelming. This is not something one country or even one region can address on its own," Gvilava said.

"The whole international community needs to pull together to address the root causes and to offer more legal migration pathways. If we fail, then these vulnerable people may easily run out of options and be forced to choose dangerous, irregular migration routes," he added.

The ongoing resettlements to Europe are part of commitments made under the 21 March 2016 European Commission proposal to create 54,000 resettlement slots.

IOM is not involved in the returns from Greece to Turkey, but it facilitates resettlement of refugees from Turkey to third countries.

According to the plan, irregular migrants are determined by Irregular Migration Monitoring Units composed of immigration and liaison officers and carried out via checkpoints mainly on the islands of Lesvos, Chios, Samos, Leros and Kos.

Irregular migrants that have crossed to Greek islands from Turkey will be evacuated from Greek territory and sent to Turkey to be readmitted into the country. This is when the refoulment process kicks in; for every Syrian refugee received from the Greek islands, Turkey will send a Syrian asylum seeker to Europe to find a home and be settled in the EU. The transfer and the extradition of the refugees will be funded by the EU, and the whole progress will be reviewed by both sides on a monthly basis.