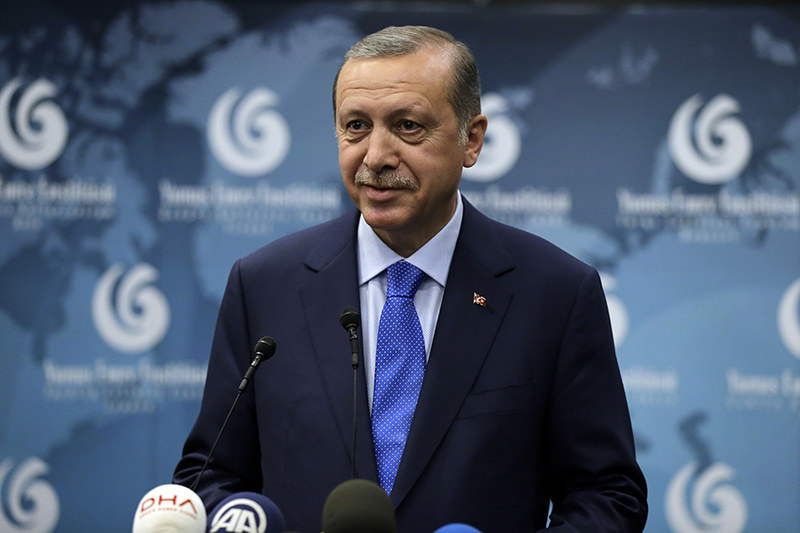 President Recep Tayyip Erdoğan highlighted the need for dialogue and tolerance during his visit to the Croatian capital Zagreb Wednesday.

According to his televised address made at a ceremony to mark Croatia's 100th anniversary of recognizing Islam as an equal to other religions, Erdoğan spoke at length on the importance of unity and solidarity.

"Today, we must speak of good examples of living together, not the painful events [from the past]. We see different religions and cultures that make up the social mosaic of Turkey as a precious treasure," he said.

He also appreciated Croatia for allowing Muslims to freely practice their faith.

"I hope that Muslims would continue to be in the region for centuries, and live in peace and harmony. I can see that today Muslims in Croatia feel free to practice their religion."

"There is no doubt that the same case applies to other religions and cultures. I believe that it has contributed to a strong cooperation between the Croatian government and the Islamic community in Croatia," he said.

Starting her address with the Muslim words of greeting "Assalamu alaikum", which means peace be upon you, Kitarovic said: "This legal-political act [100 years ago] was an important statement of recognition of equality of Islam, which now has an indispensable component in Croatian history and culture. Therefore, this significant day has great importance for the Croatian state as well as for Muslims in Croatia."

The Croatian parliament also held a special session in Zagreb to mark the occasion.

On April 27, 1916, the Croatian-Slovenian province of the then Austro-Hungarian Empire held a parliamentary session in which Islam was recognized as equal to Roman Catholicism and Orthodoxy.

Islam was introduced to the region by the Ottoman Empire in the 15th century.

Roman Catholics represent 86 percent of the country's population, followed by Orthodox Christians at 4.4 percent and Muslims at 1.5 percent, i.e. about 63,000 people.

Croatia declared its independence during the breakup of Yugoslavia in 1991 and was internationally recognized in January 1992. Since 2013, Croatia has been a member of the European Union.