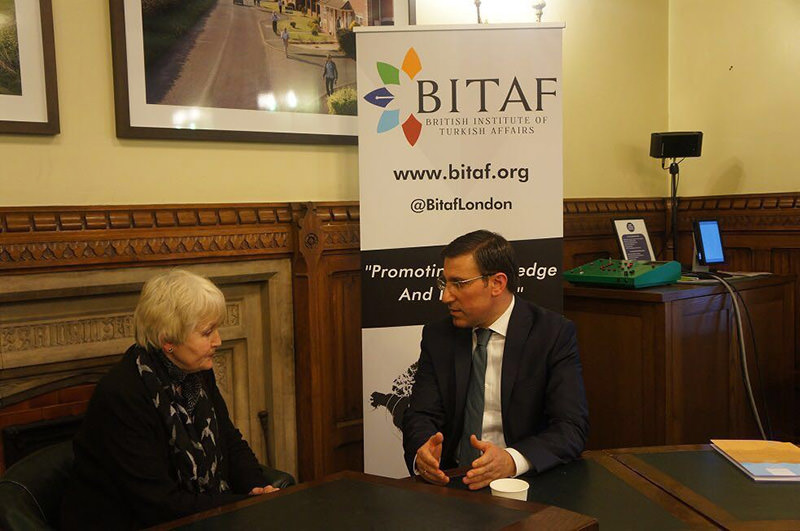 The head of the Turkish delegation to the Parliamentary Assembly of the Council of Europe (PACE), Talip Küçükcan, stated that the security of Europe begins in Turkey and called on Turkey's European partners for wider cooperation in the fight against terror.

Speaking at a joint panel entitled "Turkey, the EU and the Question of Migration" hosted by the British Institute of Turkish Affairs (BITAF) and the Tony Blair Faith Foundation at the House of Commons, lower chamber of the U.K. Parliament, AK Party deputy Küçükcan said that the escalating Syrian crisis and the refugee crisis it brought to the region does not only concern Europe but many other states in the region.

While he expanded on the visa liberalization process — stating that nearly all conditions in the 72 clauses have been met — he also underlined that recent comments on the redefinition of Turkey's terror legislation has nearly halted discussions.

Küçükcan slammed the requests of the EU, stressing that Turkey is under a greater security threat than Europe, being under near-constant terror attacks from the PKK and Daesh terror organizations.

"Our allies must work together with us against them, because one of the prerequisites of the EU is to have a common security policy, and the fact is that security for Europe begins with Turkey," he said.

During the panel held in Westminster, Küçükcan expressed criticism over the silence of EU countries on the terror of the PKK, PYD and YPG, while expressing the need for retaliation against Daesh.

"Daesh spreads terror in the same manner as the PKK and its affiliates; therefore, they should also be considered terrorist organizations. Remaining silent on the terrorist actions of the PKK will only legitimize what they do" he said.

He continued that all Turkey asks from its European allies is to differentiate the Kurdish issue from the terrorist activity of the PKK, as groundbreaking political and legal steps have been taken to resolve the Kurdish issue. However, the PKK continues to carry out acts of terror as well as refusing to give up its arms.

Küçükcan also touched on the visa liberalization agreement and the exchanges that took place between the EU and Turkey, drawing attention to the three main objectives of the Turkey-EU migration deal.

"The first aim of the readmission agreement was to halt the deaths of refugees — mainly women and children — in the Aegean Sea," he said, adding that at least 5,000 refugees have lost their lives in the Aegean and Mediterranean.

Küçükcan explained that the deal's second objective was to gain control over human trafficking and the flow of refugees. He said that there has been progress on this issue.

"The third objective, which was to share the refugee burden, has not gained momentum, as the EU has failed to release any of the funds from the six billion euros agreed upon," he said.

The panel closed with comments by Sedat Özdemir, chair of the London-based think tank BITAF, and Ed Husain, chair of the Tony Blair Faith Foundation.