World leaders meet in Istanbul to discuss future of humanitarianism 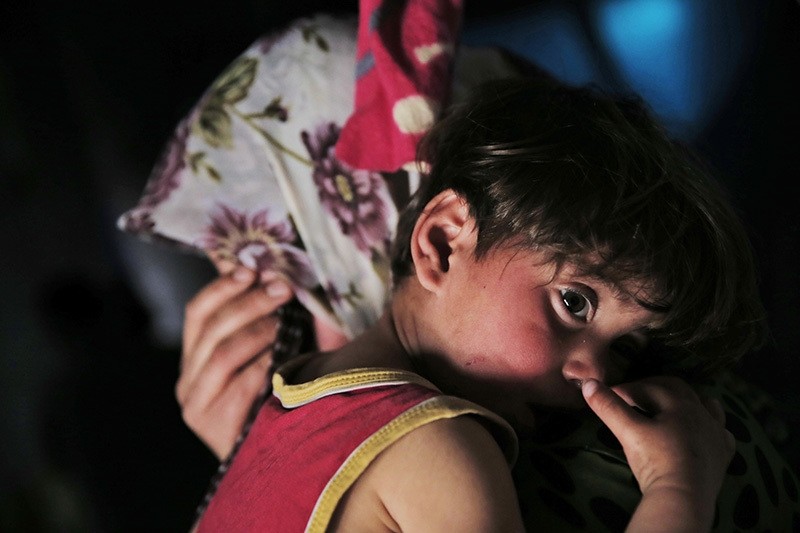 The two-day World Humanitarian Summit, under Turkey’s chairmanship in Istanbul, will bring together for the first time the most important leaders in the world to address some of the most intractable humanitarian problems and try to find solutions to global crises

World leaders and prominent figures at global institutions working on humanitarian issues gather Monday in Istanbul for the World Humanitarian Summit, the first global summit on humanitarian action of this size and scope, with the goal of bringing the global community together to commit to new ways of working together to save lives and reduce hardship around the globe. 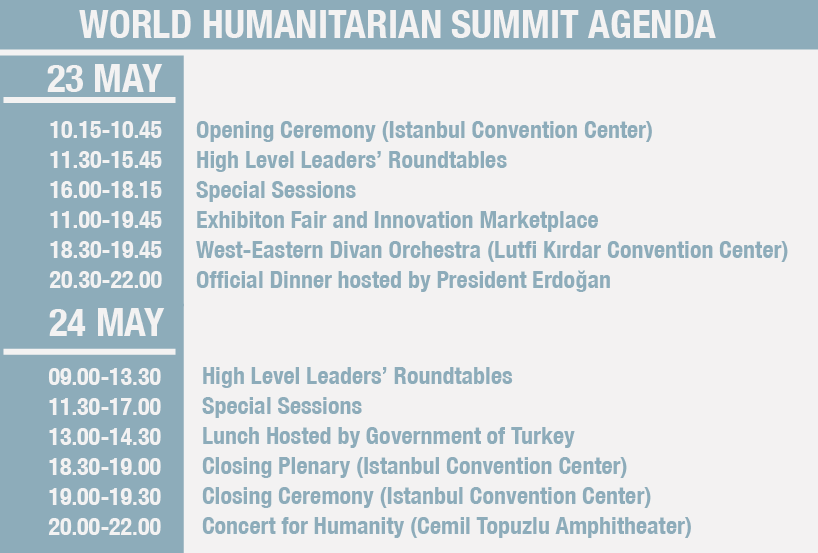 The two-day summit, which is hosted by Turkey and under the co-chairmanship of President Recep Tayyip Erdoğan and United Nations Secretary-General Ban Ki-moon, is a global call to action to relieve humanitarian crises. Some 5,000 participants, including global and government leaders, business figures, aid organizations, nongovernmental organizations and academics will be at the summit. Around 125 of the U.N.'s 193 member states have also confirmed their attendance, with 50 of them being represented by their heads of state or government such as German Chancellor Angela Merkel and U.S. Vice President Joe Biden. The summit is expected to address the question of how the world humanitarian system can become more effective and how humanitarian mechanisms can be made cheaper and more efficient. Leaders will discuss issues such as political leadership, humanitarian financing, dealing with natural disasters and climate change.

Leaders will discuss issues such as political leadership, humanitarian financing, dealing with natural disasters and climate change. The current refugee crises and forced displacement through a number of round-table talks, briefings, seminars, workshops and panel discussions will be some of the main topics at the summit.

Turkey hosting this kind of summit as one of the world's leading humanitarian donors is another important factor that makes the event significant. The country has taken in almost 3 million refugees who have fled war and conflict, including 2.7 million Syrians, according to official statistics. The country is currently home to the world's largest refugee population and has spent $10 billion on the refugee crisis within its borders since 2011.

Turkey's successful provision of humanitarian and emergency aid is due to the hard work of several institutions, especially the Turkish Cooperation and Development Agency (TİKA), the Prime Ministry Disaster and Emergency Management Authority (AFAD) and the Turkish Red Crescent. Among Organization for Economic Co-operation and Development's (OECD) allocated aid rankings, Turkey came in second, providing $2.42 billion, after the U.S., but came first in terms of aid as a percentage of its gross national product (GNP).

According to U.N. figures, just 0.4 percent of the global aid budget, roughly $540 million, was spent on reducing disaster risks in 2014 from $135.2 billion. Ban and other leaders under Turkey's chairmanship will be looking for that rate to rise to at least 1 percent.

The global charity system has failed to properly meet the needs of humanitarian crises stemming from ongoing conflicts, wars, rising economic inequality and resource shortages. Some 80 percent of such crises spring from armed conflict and lead to mass migration and epidemics, which put a strain on the international system. Today, 125 million people need humanitarian assistance, 218 million have been affected by disasters each year for the past two decades and more than 60 million are forcibly displaced, especially due to civil wars in Syria, Yemen and conflicts in Afghanistan and several African countries.

Elsewhere, speaking in St. Peter's Square on Sunday, Pope Francis asked for prayers so that participants at the summit fully commit to achieve what he defines as their main aim to save the life of every person. He asked for prayers so that the summit will yield a commitment to "save the life of every human being, no one excluded, especially the innocents and most defenseless."

Focusing on the five core responsibilities of the humanitarian agenda, global leadership to prevent and end conflict, uphold the norms that safeguard humanity, leave no one behind, change people's lives from delivering aid to ending need and investing in humanity, the summit will hold various events on different subjects simultaneously.

The two-day event will be centered around the High-Level Roundtable Discussions with the attendance of heads of state and government and high-level representatives from other stakeholders to make commitments to achieve the agenda for humanity and to discuss various topics such as "Political Leadership to Prevent and End Conflicts Changing People's Lives" and "Uphold the Norms that Safeguard Humanity." Special sessions will also be held in two-day programs to provide a platform for member states and other stakeholders concerning various focuses to launch strategic initiatives to support and achieve the agenda for humanity. "Migrants and Humanitarian Action," "Education in Emergencies and Protracted Crises," and "Regional Action for Global Challenges" will be some of these subjects.

Alongside the roundtable discussions and special sessions, the summit presents a rich content program for public participation. While there will be various side events at the Lütfi Kırdar Convention Center in the form of briefings, seminars, workshops and panel discussions, the program will also host musical performances, storytelling sessions and photography exhibitions.

There will be a special exhibition fair at the Istanbul Convention Center, which will showcase the practical applications of innovations, new or improved products, tools, services and processes that contribute to effective humanitarian action, as well as the work, products and programs of governments, organizations, agencies, companies and other institutions in support of humanitarian action.

While the first day of the program will close with a performance by the West-Eastern Divan Orchestra, the World Humanitarian Summit will end with the Concert for Humanity at the Cemil Topuzlu Amphitheater after the closing ceremony.

*Semanur Pekkendir contributed to this report