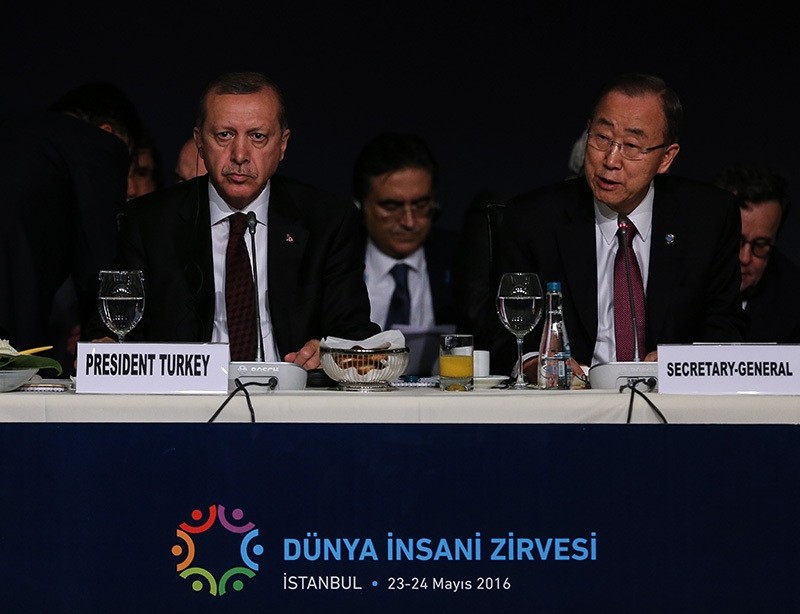 Speaking at the opening session of the two-day World Humanitarian Summit, President Erdoğan stressed that the current system for humanitarian aid does not function well and other countries have to do their fair share in the refugee crisis

President Recep Tayyip Erdoğan said at the World Humanitarian Summit in Istanbul held on Monday that Turkey expects fairer sharing of the humanitarian burden of the ongoing refugee crisis and the current system cannot function well enough to deal with this problem.

Explaining that Turkey has not been able to receive the necessary support and contributions from the international community for the refugee crisis, he said: "The current system falls short [and] the burden is shouldered only by certain countries. Everyone should assume responsibility from now on.

"Needs increase every day but resources do not increase at the same pace. There are tendencies in the international community to avoid responsibility," he said.

"Turkey knows this bitterly," he added, saying Turkey had spent $10 billion on Syrian refugees compared to the $450 million from the international community.

"I hope the World Humanitarian Summit will serve as a turning point in all these areas that we shall never forget," he said.

He also said that more countries need to be encouraged to share the burden. Turkey is home to more than 3 million refugees, making it the country with the largest refugee population in the world.

Erdoğan also said that the United Nations Security Council (UNSC) needs urgent reforms in order to fulfill its functions and called for the use of vetoes by the UNSC's five permanent members to be limited.

"Turkey has done its best to contribute to the five core responsibilities that Secretary-General [Ban Ki-moon] mentioned," he said.

These responsibilities include preventing and ending conflict, respecting the rules of war, addressing forced displacement, achieving gender equality, responding to climate change, ending the need for aid and investing in humanity.

Erdoğan also urged for change in the UNSC, the five permanent members of which are the U.S., U.K., France, Russia and China. Each one of these members has veto power, allowing them to block draft resolutions even if they have broad international support.

Elsewhere, in a column for U.K. daily The Guardian on the same day, Erdoğan said the existing system relies heavily on the United Nations and the mercy of individual nation-states, and that global consensus is needed to help the millions of people stricken every year by war and natural disasters.

By spending a bigger share of its gross domestic product (GDP) on humanitarian aid than any other, Turkey is the world's most generous country, Erdoğan said, demonstrated by examples like Somalia, where Turkish investment and aid has helped create political stability and combat terrorism.

"Turkey's response to the humanitarian crisis in Syria is another success story," he asserted.

"At a time when the international community failed the Syrian people – 600,000 of whom have lost their lives in the civil war, with 13 million forced from their homes – Turkey, along with the rest of Syria's neighbors, was left to deal with the conflict's consequences.

"As the Syrian civil war enters its sixth year, we are calling on the world to create a fair mechanism for sharing the burden."

Erdoğan added that the international community "must not buy into" Syria's Bashar Assad's argument that removing him from power would lead to the further escalation of the conflict in the country.

As part of the summit, a special exhibition fair was held at the Istanbul Convention Center, which showcased the practical applications of innovations, new or improved products, tools, services and processes that contribute to effective humanitarian action as well as the work, products and programs of governments, organizations, agencies, companies and other institutions in support of humanitarian action.

There were also various side events at the Lütfi Kırdar Convention Center, including briefings, seminars, workshops and panel discussions. The program also includes musical performances, storytelling sessions and photography exhibitions.

The first day of the summit was closed on Monday with an official dinner hosted by Erdoğan in the Dolmabahçe Palace following a performance by the West-Eastern Divan Orchestra in Lütfi Kırdar Convention Center.