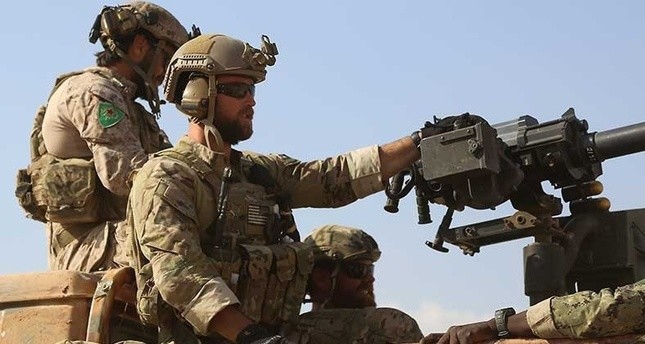 The US troops wearing badges of the People's Protection Units (YPG) was "unauthorized" and "inappropriate" and troops have been ordered to remove the badges, a military spokesperson said Friday. The move came after Turkish officials harshly criticized the recent images of the US troops in Raqqa wearing uniforms with YPG insignia appeared in media.

On Friday, Foreign Minister Mevlüt Çavuşoğlu said that such images of an ally of Turkey are unacceptable. "Our advice for the U.S. is that they should wear DAESH, al-Nusra, and al-Qaeda insignias when they go to other places in Syria and should wear Boko Haram insignias in Africa," he said, saying it was a double standard and hypocritical.

On Wednesday, several photos appeared in media in which U.S. soldiers in support roles for the ground offensive are wearing the insignias of the YPG and Women's Protection Units (YPJ). The incident has drawn reactions on social media in Turkey, with some accusing the Obama administration of having a two-faced strategy against Turkey, which is a NATO ally and recognizing the PKK as a terrorist organization.

Ties between Washington and Ankara have been strained over the PYD and the YPG, with the Obama administration insisting that it is an effective partner in the fight against DAESH. Ankara continues to reiterate that there cannot be any distinction between good or bad terrorist organizations and asserts that the PYD and the YPG are affiliated with the PKK, a designated terrorist organization by the U.S., EU and NATO.