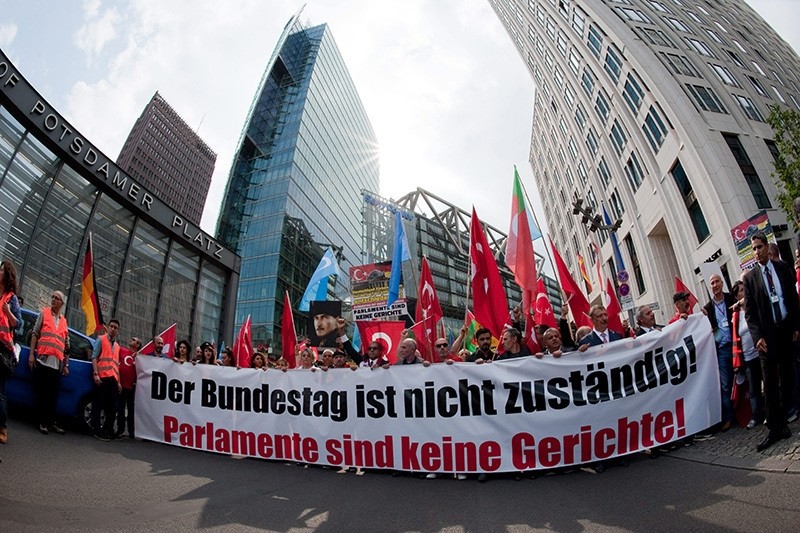 Demonstrators hold up a banner reading 'The Bundestag is not responsible! Parliaments are not courts!' on Potsdamer Platz in Berlin, Germany, 28 May 2016. (EPA Photo)
by Anadolu Agency Jun 01, 2016 12:00 am

If the German parliament votes to recognize the deaths of Armenians in 1915 as "genocide," this may alienate the Turkish community living in Germany, according to a deputy of Turkey's ruling Justice and Development (AK) Party.

Şirin Ünal, who is also the co-chair of the German-Turkish Parliamentary Friendship Group, told Anadolu Agency Wednesday that Thursday's vote at the Bundestag on the "genocide" resolution could lead to a "process of alienation" among Turks in Germany, who represent the largest minority group in the country.

"In the event that this resolution is approved, the outcome will benefit neither Turkey nor Germany, or our vitally important projects, on which we will continue to work closely together," Unal said, adding that he hoped Germany would consider the resolution as a "hindrance" to the further development of ties and would not pass it for "political reasons."

Ünal said that he also sent a letter to his counterpart Michelle Muntefering on the issue, as it had the potential to "irreparably damage" bilateral relations.

Noting that it was not up to parliaments to label historical events as genocide, Ünal called on politicians to be "more sensitive" about such issues.

Ünal said there was neither a legitimate court ruling on 1915 events nor consensus on the matter, which he said "should not be left to the mercy of daily politics."

Ünal also pointed out that Turkey has long proposed leaving this issue to historians, and offered to open up its archives for detailed analysis.

As for the Turkish community's response to the likely passing of the resolution, Ünal said that Turkish voters would likely voice their frustration at the upcoming elections.

"They will never forget such a betrayal and injustice," he said.

Last year, German parliamentary parties approved the resolution in principle but sent it to committee for further work.

World War I was a global disaster that left 15 million people dead and another 20 million injured. The empires of the Ottomans, Austria-Hungary and Russia collapsed and boundaries were re-drawn. Millions of people had to leave their homes -- a common fate for the people who made up the Ottoman Empire, including Armenians.

During the war, some Armenian nationalists took advantage of the fighting between Ottoman and Russian forces on the eastern border of the empire and decided to join forces with the Russian army, with the aim of creating an ethnically homogeneous Armenian homeland.

When the Russian army invaded eastern Anatolia, some volunteer Armenian units in Russia and the Ottoman Empire supported the invasion. Some Armenian officials in the Ottoman army switched sides and joined the invading Russian army against the Turks.

Also, some Armenian armed groups massacred civilians during the Russian invasion. In response, the Ottoman government tried to convince Armenian leaders to stop the violence, but to no avail.

The government then decided to shut down the Armenian revolutionary committees and arrest or deport some well-known figures on April 24, 1915 -- a date that would later be selected to hold activities commemorating the so-called "Armenian genocide."

On May 27, 1915, the Ottoman government ordered the Armenian population residing in or near the war zone, as well as those collaborating with the Russian army, to be relocated to the southern Ottoman provinces.

War-time conditions, famine, epidemics, ongoing internal conflicts and local groups seeking to take revenge left a number of Armenians dead, although the Ottoman government had made careful plans for their safe transfer and tried to meet their humanitarian needs.

Historical documents clearly show that the Ottoman government not only did not intend for these tragedies to take place but also punished offenders who committed crimes against the migrating Armenians.

Need for empathy and fair memory

Armenia and the Armenian diaspora have demanded an apology and compensation for the 1915 incidents.

They have also advocated for the recognition of the events as "genocide," a term defined in the 1948 Convention on the Prevention and Punishment of the Crime of Genocide as "acts committed with intent to destroy, in whole or in part, a national, ethnical, racial or religious group."

Turkey argues that the issue should be handled from a perspective of "just memory," by respecting the "memory" of both sides, understanding what each nation experienced and taking a non-political, non-biased approach to history.

The Turkish government has repeatedly proposed the creation of a joint commission of historians from both countries that includes international experts in order to tackle the issue in an objective, unbiased manner.

The proposed commission would conduct its research, not only by using Turkish and Armenian archives, but also by using the relevant archives of other countries.

Armenia did not use opportunity to normalize relations

The most significant development in the normalization of relations between the two countries was in October 2009, when two protocols were signed to rebuild diplomatic relations and improve bilateral relations.

The protocols proposed an impartial scientific examination of the historical records and archives and the mutual recognition of boundaries in order to restore confidence between the two nations and find solutions to existing problems.

The protocols also included cooperation across a wide range of areas including tourism, economy, transport, communication, energy, environment, high-level political consultations and student exchange programs, which could all help in normalizing relations.

The constitution refers to the "Armenian Declaration of Independence," in which an item reads: "The Republic of Armenia stands in support of the task of achieving international recognition of the 1915 Genocide in Ottoman Turkey and Western Armenia."

The declaration also names the eastern part of today's Turkey as "Western Armenia."

Turkish authorities believe that in order to overcome the historical and political bitterness, all sides must be honest and open-minded.

Turkey's then foreign minister and incumbent Prime Minister Ahmet Davutoglu said in December 2013, following his visit to Armenia, that one-sided approaches and conjectural evaluations should be avoided in order to reach a resolution. He added that history could only be built with a "just memory."

In 2014, when incumbent President Recep Tayyip Erdoğan was prime minister, he expressed his condolences for the first time to all Ottoman citizens who lost their lives during the 1915 events, including Armenians.

"I offered a hand of friendship in 2014 to Armenia but, unfortunately, it came to nothing," Erdoğan said in a speech.