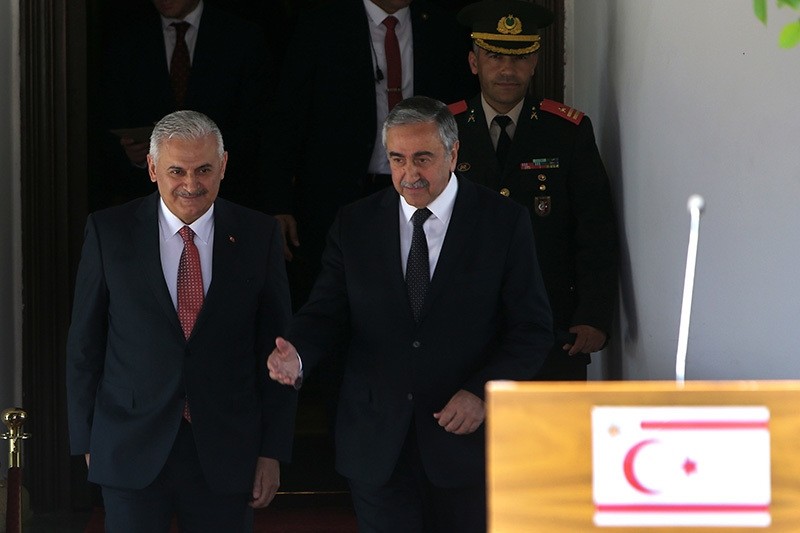 Turkey expects that the Cyprus issue can be resolved within the next 12 months, said Prime Minister Binali Yıldırım on Wednesday.

"As a guarantor state, Turkey sincerely expects that a political solution negotiated on the basis of the will of both [Turkish Cypriot and Greek Cypriot] communities can be found within the next year," Yıldırım told a joint news conference with the president of the Turkish Republic of Northern Cyprus, Mustafa Akıncı.

Saying that a lasting solution is possible only "...through the understanding of an equal partnership and a belief in a common future," Yıldırım reiterated Turkey's commitment to the process and continued support for the Turkish Cypriot side.

Akıncı, for his part, said that the next seven months were "critical," as Cyprus has entered a "historically significant period."

The Turkish Cypriot leader stressed the importance of making the best use of this time so as not to "...lose the opportunity to find a resolution."

"We will continue to do our best in order to bring about an agreement based on a bi-zonal, bi-communal, and politically equal federation," he said.

Akıncı praised Turkey's support in the matter and called on all other related parties, including Greece in particular, to contribute to finding a fair resolution at the earliest.

Asked if the "crisis" with Greek Cypriot leader Nicos Anastasiades was over after the latter canceled a planned meeting last week, Akıncı said there was no actual crisis, but "an artificially created situation."

"We expect Anastasiades to contact both us and the UN and propose a date for a new meeting," he said, adding that he would be meeting Anastasiades on Thursday at an event celebrating June 1, International Children's Day.

"Fifty students each from the Turkish Cypriot and Greek Cypriot sides will come together in the buffer zone. I hope this meeting will lay the basis for restarting talks," he said.

The two leaders had planned to meet last Friday, but the meeting was canceled after Anastasiades refused to attend a dinner hosted by Turkish President Recep Tayyip Erdoğan during the World Humanitarian Summit in Istanbul after being told that Akıncı was also invited.

He also cut short his trip to Istanbul over this perceived breach of protocol.

Reunification talks between the Greek Cypriot and Turkish Cypriot communities on the island resumed in May 2015 when the newly-elected Akıncı met with his Greek Cypriot counterpart Anastasiades.

Previous negotiations stalled in October 2014 due to a dispute over underwater gas exploration.