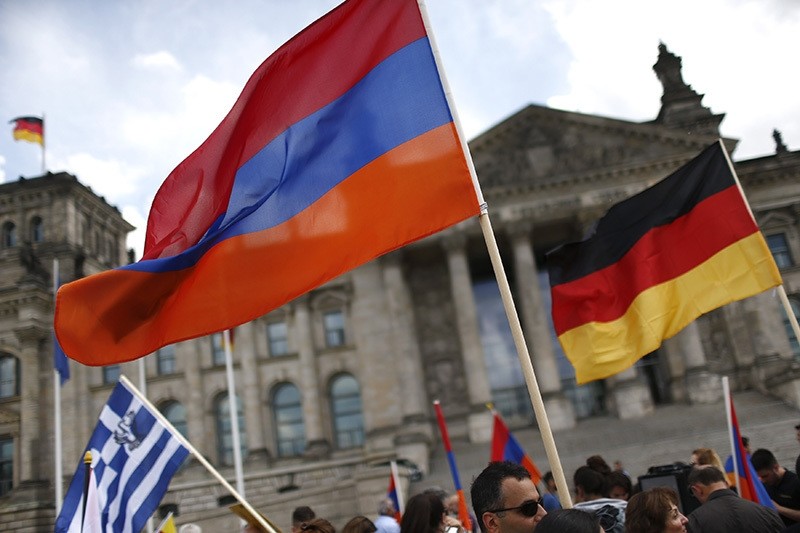 Supporters wave Armenian and German flags in front of the Reichstag, the seat of the lower house of parliament Bundestag in Berlin, Germany, June 2, 2016. (Reuters Photo)
by Daily Sabah with Agencies Jun 02, 2016 12:00 am

The lower house of Germany's Federal Parliament approved a controversial motion labeling the 1915 events as 'genocide' on Thursday.

The symbolic resolution, which was put forward with support from all the parties in Parliament, Chancellor Angela Merkel's conservative bloc consisting of Christian Democratic Union and Christian Social Union (CDU / CSU), coalition partner the Social Democrats (SPD), and the opposition Greens, was approved with almost all of the possible votes in the plenary session.

"It is not the task of German parliament to give historical assessments about the events in another state, Kudla said in German in her Twitter account, adding that the political and financial results of the decision cannot be predicted and likely to harm relations with Turkey, including the migrant deal currently is of key importance for Germany.

President Recep Tayyip Erdoğan said while on a trip to Nairobi, "This is a decision that will affect our relations [Germany-Turkey ties] seriously," but added that he will handle the matter more in depth when he returns to Turkey.

Prime Minister Binali Yıldırım said that Turkey had already recalled its ambassador to Germany, Hüseyin Avni Karslıoğlu, for consultations. The prime minister said Turkish people take pride in in their past and that "there is no event in our past that would cause us to bow down our heads in embarrassment."

Government Spokesman and Deputy Prime Minister Numan Kurtulmuş also reacted against the vote, saying "Acceptance of manipulated and baseless claims by Germany was a historic mistake." Kurtulmuş made the comments on his official Twitter account. He said that Turkey will provide a thorough response in a variety of forums to the vote, emphasizing that Germany's decision was "null and void" for Turkey and that his issue needs to be handled by historians.

In a statement, the Ministry of Foreign Affairs slammed the vote by the German parliament, describing it as a "disgrace to the reputation of this body." The statement noted that there is already a biased stance in Germany regarding the 1915 events, in which academic and cultural works challenging Armenian claims are being suppressed.

"Turcophobia and Islamophobia reaching to the level of racism, current developments in domestic politics and foreign policy, some arrogant and opportunistic politicians and the deep trauma created by Germany's record of crimes against humanity and genocide, extending from Namibia to the Holocaust, may be among the reasons behind this policy," the statement said.

Merkel also commented on the issue at a joint press conference with NATO Secretary-General Jens Stoltenberg, where she said: "Our relations with Turkey are strong and comprehensive."

Prime Minister Binali Yıldırım earlier said this week his country would not nix a deal with the European Union on curbing the flow of migrants to Europe over the motion, but told party officials in Ankara earlier Thursday that the vote was a "true test of friendship."

"Already frozen relations with the European Union will be damaged even more," Emre Gönen, an academic specialized in EU politics at Bilgi University and a Daily Sabah columnist, told Daily Sabah. Stressing that Germany is the driving force in the 28-nation bloc, Gönen said the approval of the bill will bring very serious consequences.

"The ties with the EU have stalled after the rift over Turkey's anti-terrorism laws," Gönen said, adding that the recent strife about the Armenian genocide resolution with Germany is very likely to do harm.

Yaşar Hacısalihoğlu, vice dean and professor at Yeni Yüzyıl University, told Daily Sabah that the approval of the resolution is clearly "a political decision that aims to put an obstacle in the way of Turkey, which has been thriving."

"Parliaments are not courts or institutions of historical research. [Foreign governments] try all kinds of ways to block Turkey by creating artificial agendas," he said.

Slamming Germany for calling the 1915 events genocide, Hacısalihoğlu said Germany should be the last country to speak of massacres. "Turkey works for the sake of the world's prosperity and welfare. It disturbs world powers," he asserted.

Hacısalihoğlu also said that concepts such as colonialism and imperialism were not invented due to Turkey's history, but by Western powers.

The decision by the German parliament to pass a resolution recognizing the events surrounding Armenians in 1915 as "genocide" may alienate the Turkish community living in Germany, according to a deputy of Turkey's ruling Justice and Development Party (AK Party).

Şirin Ünal, co-chair of the German-Turkish Parliamentary Friendship Group, told Anadolu Agency (AA) on Wednesday that Thursday's vote at the Bundestag on the "genocide" resolution could lead to a "process of alienation" among Turks, the largest minority group in in Germany.

"If this resolution is approved, the outcome will benefit neither Turkey nor Germany, nor our vitally important projects, for which we will continue to work closely together," Ünal said, adding that he hoped Germany would consider the resolution as a "hindrance" to the further development of ties and would not pass it for "political reasons." Ünal said that he had sent a letter to his counterpart Michelle Muntefering regarding the issue, as it had the potential to "irreparably damage" bilateral relations.

Noting that it was not up to parliaments to decide whether historical events qualified as genocide, Ünal called for politicians to be "more sensitive" about such issues.

Ünal said there was no legitimate court ruling regarding the events of 1915, nor historical consensus on the matter, which he said "should not be left to the mercy of daily politics."

Ünal pointed out that Turkey has long proposed that this issue be decided by historians, and offered to open up its archives for detailed analysis.

As for the Turkish community's response to the passing of the resolution, Ünal said Turkish voters would likely voice their frustration during the upcoming election. "They will never forget this betrayal and injustice."

Last year, German parliamentary parties approved the resolution in principle, but sent it to committee for further work.

German FM hopes resolution will not bring damage to ties

German Foreign Ministry spokesman Martin Schafer said on Wednesday that Berlin hopes that the resolution will not undermine close cooperation between Germany and Turkey toward addressing common challenges. "I hope and also expect that the possible decision by Germany's federal parliament tomorrow will not bring any long-term damage to relations with Turkey," Schafer told reporters in Berlin. "On the contrary we have many issues that we would like to address together with Turkey, including the years-long process of Turkey's membership application to the EU, but also many other issues. That also includes the refugee deal."

Turkey's position is that the deaths of Armenians in eastern Anatolia in 1915 occurred after some Armenian nationalists sided with invading Russians and revolted against Ottoman forces. A subsequent relocation of Armenians resulted in numerous casualties.

Ankara denies the alleged genocide, but acknowledges that there were casualties on both sides during World War I. Turkey objects to the presentation of the incidents as "genocide," but describes the events of 1915 as a tragedy for both sides.

Armenia did not seize opportunity to normalize relations

The most significant development in the normalization of relations between Armenia and Turkey was in October 2009, when two protocols were signed to rebuild diplomatic and bilateral relations.

The protocols proposed an impartial scientific examination of the historical records and archives, as well as the mutual recognition of boundaries in order to restore confidence between the two nations, in a bid to find solutions to existing problems.

The protocols also included cooperation in a wide range of areas including tourism, economy, transport, communication, energy, environment, high-level political consultations and student exchange programs, all of which might help to normalize relations.

By referring to the constitution, the Armenian court meant the "Armenian Declaration of Independence," in which an item reads: "The Republic of Armenia stands in support of the task of achieving international recognition of the 1915 Genocide in Ottoman Turkey and Western Armenia."

The declaration also names the eastern part of today's Turkey as "Western Armenia."

World War I was a global disaster that left 15 million people dead, and another 20 million injured. Formerly globe-spanning empires, including those of the Ottomans, Austria-Hungary and Russia, collapsed and national boundaries were redrawn along ethnic and nationalist lines.Millions of people were forced to flee their homes – a common fate for the people who formed the Ottoman Empire, including Armenians. During the war, Armenian nationalists exploited the fighting between Ottoman and Russian forces, and collaborated with the Russian army, with the aim of carving out an ethnically homogenous Armenian homeland. When the Russian army invaded eastern Anatolia, some volunteer Armenian units in Russia and the Ottoman Empire supported the invasion. Some Armenian officials in the Ottoman army joined the invading Russian army to fight against Turks. Some Armenian armed groups massacred civilians during the Russian invasion. In response, the Ottoman government and Armenian groups loyal to the Ottomans tried but failed to convince nationalist Armenian representatives and opinion leaders to stop the violence.The government then decided to shut down the Armenian revolutionary committees and arrest or deport some well-known figures on April 24, 1915 – a date that would later be selected to commemorate the so-called "Armenian genocide." On May 27, 1915, the Ottoman government ordered the Armenian population residing in or near the war zone, as well as those collaborating with the Russian army, to be relocated to southern Ottoman provinces. War-time conditions, famine, epidemics, ongoing internal conflicts as well as local groups seeking to take revenge for attacks by Armenian nationalists on their villages – all of the above resulted in the deaths of numerous Armenians, even though the Ottoman government had made careful plans for their safe transfer and tried to meet their basic needs.