Turkey will not act in anger, but will act, president says on German 1915 resolution 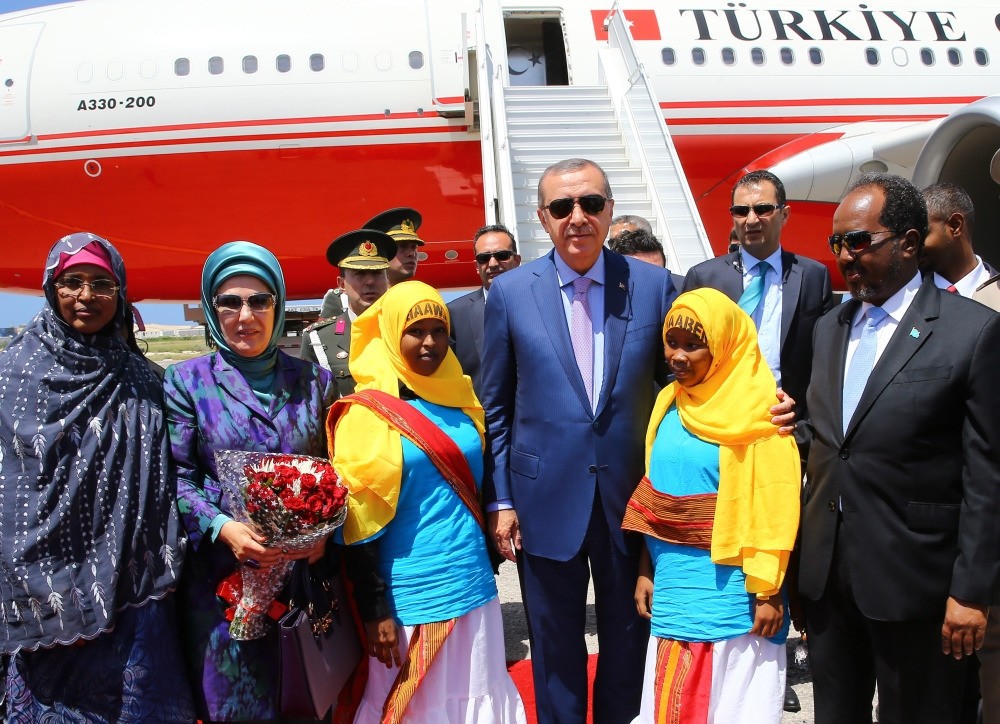 President Erdou011fan and his spouse welcomed by his Somali counterpart at the Mogadishu International Airport on Friday.
by Serdar Karagöz Jun 04, 2016 12:00 am

As it is still unclear what Ankara's response will be to the adoption of the controversial Armenian resolution by the German parliament, President Erdoğan said Turkey will carefully weigh the possible measures that will be taken

Speaking to journalists accompanying him late on Thursday on his visit to East Africa, President Recep Tayyip Erdoğan said Turkey will carefully weigh the possible measures that will be taken against Germany in response to German parliament's decision to endorse a resolution that defines the 1915 incidents as genocide. It is still too early to discuss economic sanctions or other diplomatic measures that will be implemented, Erdoğan emphasized, adding: "Acting in anger is unworthy of us." He said the parliamentary minutes would have to be assessed, the ambassador to Berlin, who was recalled, will be consulted as part of discussions between the presidency, Prime Ministry and Foreign Ministry on the steps Turkey will take. He called the timing of the vote "interesting." "It was the 100th year of the incidents last year and they didn't vote on it then, but decided to do so now. This is very thought provoking." He also commented on his telephone conversation with German Chancellor Angela Merkel on Tuesday, the day when he began his East African trip to Uganda, Kenya and Somalia.

"She personally assured me that she would do everything in her power. I've been involved in politics for 40 years. I can't comprehend how she couldn't persuade her party's parliamentary group," he said, and added: "If only she couldn't have voted" in reference to Merkel, Vice Chancellor Sigmar Gabriel and Foreign Minister Frank-Walter Steinmeier's absence during the vote.

"I wonder how they will face me and our prime minister after this decision."

He also asserted that certain groups in Germany, including some parts of the German media, are openly hostile to Turkey and are involved in nefarious plots against Turkey. He added that most of these groups had Turkish connections.

When asked about his vocal desire to win over friends around the world, Erdoğan argued: "What's important is for one's desire to be centered on that hope. If, however, the other side resists an extended hand, there is little one can do."

DOES NOT REFLECT HISTORY

Turkey's stance on the 1915 incidents is clear for all to see, Erdoğan said. "Just because some people took a decision on the matter does not mean our whole history will change. What they don't seem to realize is the danger of losing a friend like Turkey." He noted that 3 million Turks live in Germany and contribute significantly to its economy, saying that German parliament had jeopardized a seriously close relationship.

When asked whether Germany, as the country responsible for the Holocaust, was trying to find itself a guilty partner by describing the 1915 incidents as genocide, Erdoğan said: "There is no similarity between the Holocaust and the 1915 incidents. The European Court of Human Rights' decision on the matter is clear. It openly said that the two issues cannot be linked and that the Armenian arguments on the matter cannot be considered the exact truth and could be openly debated. These findings are legally binding."

"Turkey has already displayed its good intentions on the refugee issue. We kept the promises made to the EU. But they didn't, neither on their promise to transfer funds to help the refugees nor on other pledges."

During his meeting with Merkel at last month's Humanitarian Summit in Istanbul, he explained to the chancellor the necessity of lifting visa restrictions on Turkish nationals and the Readmission Agreement being approved at the same time. "If not, we might not implement the necessary steps as part of the deal. Just because the Readmission Agreement is passed by Parliament and the Cabinet does not necessarily mean that this is a done deal. It should also be implemented by our Interior Ministry Directorate General of Migration Management."

Erdoğan said he had hoped a deal on reconciliation between Turkey and Israel would have been completed before the end of May, "but certain issues delayed its conclusion." He said officials on both sides continued to follow up, adding that Turkey's preconditions for normalization of an apology, compensation and lifting of the Gaza blockade, had not changed. "After the apology and compensation, we are waiting how the Gaza blockade to be lifted. The Gaza Strip has energy, water and infrastructure problems. Israel has accepted the transportation of building materials via Turkey. On the matter of energy, we had suggested solving it by anchoring an energy generating ship at the port of Ashdod. They said the port was not suitable for such a ship. They suggested another solution, which we accepted. Our proposal to resolve the water problem through digging wells and desalination were accepted too."

TURKEY WILL ACT ALONE IF NECESSARY ON SYRIA

Erdoğan said Turkey and the U.S., as two close NATO allies, should act jointly in Syria and Iraq. "Why did we send troops to Afghanistan? Because, as a NATO ally, we responded to the U.S.'s request. Moreover, we are one of the few countries that who still remain there."

He said Turkey had deployed troops to Iraq's Bashiqa region in agreement with the central Iraqi government and local leaders as part of the fight against DAESH. "But still some try to portray us as interlopers. I told all this to [U.S. President Barack] Obama. I emphasized the importance of joint action. This is especially true in Syria. Our top commanders have met. Discussions are proceeding in a positive way. The latest discussions were on pushing DAESH back from the Manbij."

He said Turkey does not want anything untoward to happen in northern Syria, and the U.S. needs to take Ankara's sensitivities into account. The PKK, which is recognized as a terrorist group by the U.S. and the EU, has established close ties with U.S. officials through its Syrian affiliate Democratic Union Party (PYD) and its People's Protection Units (YPG) militia. The U.S. argues that it is supporting the Syrian Democratic Forces (SDF), which it acknowledges is dominated by the YPG, but does not recognize the YPG as a terrorist group.

Erdoğan said: "The latest Turkish-American discussions were on cleansing the Manbij region of DAESH. They say that the SDF has about 2,500 Arabs, with 450 YPG militants in logistical support. We have voiced our concerns and determination to our counterparts. We don't want to have any new problems in northern Syria."

Erdoğan said his latest information indicated that 12 villages were freed from DAESH occupation in the Manbij region. "Manbij is not a Kurdish region. We don't want the YPG to cross over west of the Euphrates. It would not make sense for Kurds to move there because it's an Arab region. The U.S. argues that even if they cross for logistical reasons, they will eventually go back. We are closely watching whether it will happen as they say."

When one reporter asked about Turkish-Russian ties and the contradictory stances between Russian officials and President Vladimir Putin's comparably more positive remarks, Erdoğan said: "I believe Putin's remarks should be taken into account."

When asked whether Putin's statements could be construed as encouraging for the future of bilateral ties, he said: "I believe it is not right to display a negative attitude. Good politics is to facilitate good ties between two great countries like Turkey and Russia. Consequently, it is not correct to mention demands that will not be met. Everyone knows what happened. Violations of our airspace were an issue we talked about before. The incident occurred after unidentified planes entered our airspace and refused to respond to our warnings. The plane, hit as part of our rules of engagement, crashed in Syria. The pilot who survived was killed by opposition groups in Syria. Turkey worked tirelessly to retrieve the pilot's body and displayed the utmost sensitivity, including bringing an Orthodox priest to conduct the funeral rights. We even offered to Russia to deliver the body on our plane but they chose to use their own plane. We are of the opinion that Turkish-Russian ties should not be sacrificed over such an incident."

Erdoğan shared his positive outlook on Turkey's growing ties with Africa as a whole and especially his relationship with the leaders of Uganda and Kenya. He said his meetings with Ugandan President Yoweri Museveni and Kenyan President Uhuru Kenyatta had been very encouraging and that he was glad to have witnessed the very positive perception of Turkey. "If our businessmen also succeed in establishing lasting ties, both countries will become good markets for us. The entire issue settles on ensuring there are treasury guarantees." Both leaders had expressed their willingness to ensure that happens, he said, adding that both would visit Turkey during August when trade deals may be signed.

He also said that Turkish officials had briefed both leaders on the danger of the Gülen Movement and their presence in the two countries.

On the issue of switching from the current parliamentary system to a presidential system, Erdoğan said he was told the priority should be to amend the parliamentary bylaws. "This was something of an objective of mine in the last five or six years as prime minister, but we never got around to doing that." He said the government would first change the current bylaws that have become an impediment to the proper working of Parliament. He cited the delaying tactics, which verged violence by the pro-PKK Peoples' Democratic Party (HDP) during the Constitution Conciliation Commission deliberations on constitutional amendments as an example of how things should work. "At times, 40 or 50 people can take up even more time than 316. Everyone should have the right to voice their opinions. However, this should be done in accordance with the accepted protocol."

He also said that a presidential system and a president being allowed to be a party leader is "not so different." According to the current Constitution, the president has to be above politics and should annul any party affiliation before assuming the post. However, since the constitutional change that allowed the president to be directly elected, rather than by deputies, the ruling Justice and Development Party (AK Party) has been advocating a switch to a presidential system. "I had mentioned the party member president issue before the 2014 presidential election, but those who didn't want to understand took the matter out of context," Erdoğan said. He said the matter is not black and white when it came to a system change, adding that it is how to ensure the concept of a party member president is not hollow.

FIGHT AGAINST THE PKK

On the issue of the fight against PKK terrorism, Erdoğan said counterterrorism efforts will not be exclusively security-oriented, but will also involve infrastructure and urbanization initiative in regions affected by PKK violence. "It will take six months to a year but once it is complete, people in towns will realize all the speculation made by PKK advocates were wrong. The expenses of those citizens who are forced out of their homes due to PKK terror are already covered by the state. Once people who lost their homes move into new ones, they will see that the state is by their side."
Last Update: Jun 04, 2016 11:24 pm
RELATED TOPICS