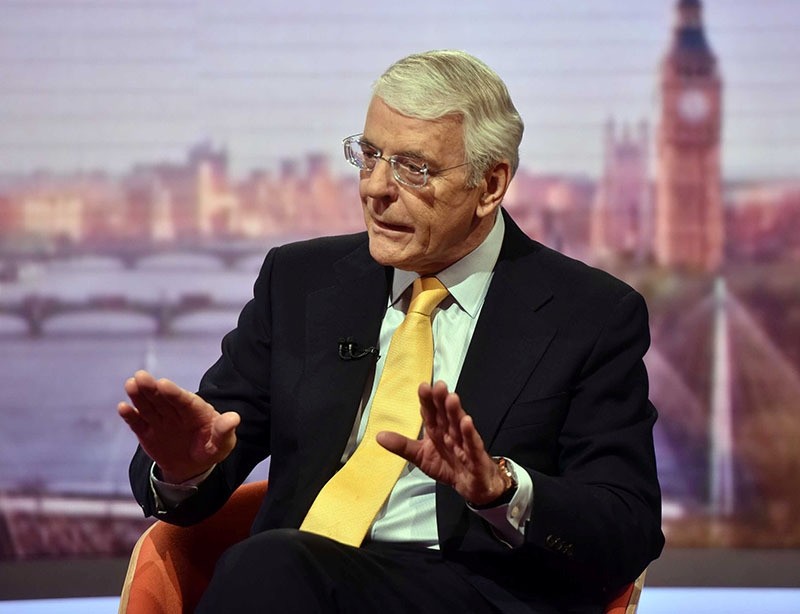 Former prime minister John Major is seen speaking on the BBC's Andrew Marr Show in this photograph received via the BBC in London, June 5, 2016. (Reuters)
by Anadolu Agency Jun 05, 2016 12:00 am

Former U.K. Prime Minister John Major has branded claims by the pro-Brexit campaign that tens of millions of Turks are preparing to migrate to Britain as "nonsense".

Major, who was premier between 1990 and 1997, told the BBC's Andrew Marr Show Sunday that British voters were being misled in their country's referendum on EU membership.

"The point that really angers me is the utterly false suggestion repeated more than once, not in a single offhand remark but in scripted, carefully prepared speeches, that we face the risk of 88 million Turks coming here," he said.

He continued: "And in any event it is seriously suggested as they do that all 88 million Turks would come here apparently for our higher national living wage.

"On the one hand, they say migrants are depressing wages and on the other [hand] people are flooding in to get our higher national wages. It's nonsense. Nonsense on stilts."

It is the latest intervention in the referendum campaign by Major, who supports his country remaining a member of the European Union. He has previously criticized the Leave campaign for being reckless and divisive.

A prominent Leave poster campaign appearing on billboards across Britain in recent weeks claims "Turkey is joining the European Union" above the image of a passport in the shape of an open door.

Remain campaigners have said the poster gave the false impression that Turkish membership-and the subsequent migration of Turkish citizens under EU freedom of movement rules-is imminent.

But appearing on the BBC program after Major, prominent Leave campaigner Boris Johnson dismissed the criticism.

"It is government policy that Turkish membership of the EU should be speeded up and there are clips of the Prime Minister [David Cameron] in Ankara advocating [that]," he said.

British voters will vote on their country's EU membership on June 23.