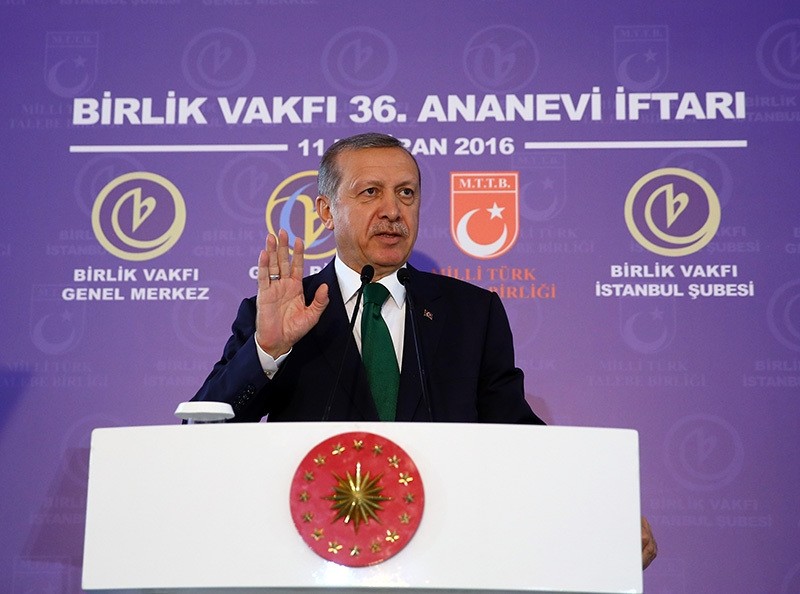 President Recep Tayyip Erdoğan criticized the Obama administration on Saturday for partnering with Syrian Democratic Forces (SDF), which is dominated by the PKK terror organization's Syrian-affiliate YPG, in operations launched against Daesh to overtake the Syrian town of Manbij, saying that the United States pick and choose between terrorist groups.

Speaking during an iftar event in Istanbul on Saturday, Erdoğan said: "Right now, there is a serious project, plan being implemented in northern Syria. And on this project and plan lay the insidious aims of those who appear as 'friends'. This is very clear, so I need to make clear statements."

Ankara has reiterated that the YPG crossing west of the Euphrates, as part of the operation to overtake Daesh-held Syria's strategic northern town of Manbij, is crossing a red line, evidence of PYD expansionist policies being implemented under the guise of fighting DAESH.

"Turkey does not need to obtain permission from anyone to interfere in the region to secure its borders," Erdoğan had asserted in a previous televised interview.

Erdoğan added that the Obama administration responds to Turkey's concerns, saying that the US is partnering with YPG only in fight against Daesh. However, Ankara has repeatedly reiterated that there are clear and organic links between PKK, which is listed as a terror organization by the U.S. and EU, and the YPG.

Ties between Washington and Ankara have been strained over American alliances with the PYD and the YPG, with the U.S. insisting that these groups are effective partners in the fight against DAESH.

Ankara has frequently voiced its concern over YPG activity along the Turkish border and has been rigid in its stance to not allow the PYD militant group to found any de facto Kurdish state in northern Syria. Turkey claims the PYD enjoys close connections with the PKK, including militant and ammunition support through underground tunnels.

"Some of our ally states respond to us by saying, 'we support the PYD/YPG because they fight against Daesh'. Well, you accept Nusra Front as a terror organization and Nusra Front also fights against Daesh. Why don't you see them as partners, too? For us, there are no good or bad terrorists. All terrorists are bad," Erdoğan added.

Erdoğan also slammed the PKK's terror activities in the southeastern provinces, saying one of the aims of the terrorist group is to destroy the cultural and historical heritage in the region, including destroying the mosques, churches, and other temples.

"The PKK terror group that targets the Holy Quran does not belong to these lands. Just like the terror group called Daesh, which has destroyed the 400-year old Islam's cultural heritage in Syria and Iraq, has no relation to Islam," the president added.

"Unless PKK erased from Turkey, Daesh erased from our region, these sorrows will not come to an end. The operations will continue. There is no giving up on this," he said.