Deputy PM: No decision made for German access to İncirlik Air Base 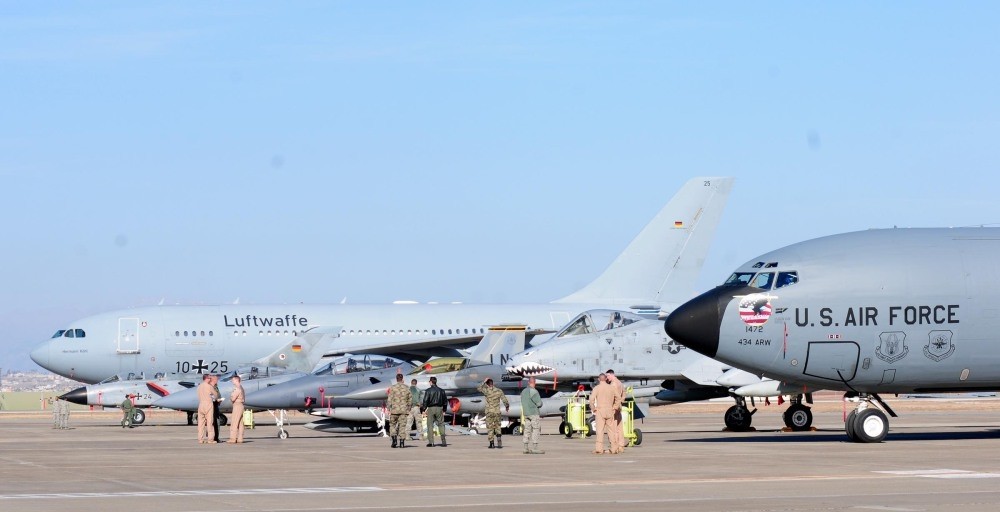 Contrary to recent reports claiming that Turkey and Germany reached a de facto agreement for Germany to set up military facilities at İncirlik, Ankara officially dismissed the claims with Deputy Prime Minister Canikli's statement. He said it is impossible for Turkey to stand idle for Germany's resolution for the events of 1915

In response to reports in several media outlets that Turkey and Germany reached a de facto compromise for Germany to set up military facilities at the İncirlik Air Base, after a Cabinet meeting yesterday Deputy Prime Minister Nurettin Canikli told members of the media that "reports are speculative" and despite having received Germany's request, a decision has not yet been made. Citing a Defense Ministry spokesman, a report in Deutsche Welle (DW) on Friday claimed the two countries had agreed on basic issues and that talks regarding the Turkish-German Technical Arrangement Agreement, which would regulate work regarding German planes and personnel at the air base, are ongoing. Along with Canikli's remark, government sources in Ankara also previously told Daily Sabah that Turkey is still mulling over opening the air base for the German initiative. Enes Bayraklı, a foreign affairs specialist at the Political, Economic and Social Research Foundation (SETA), told Daily Sabah yesterday that even though Turkey stresses the importance of its position on İncirlik Air Base, he said that Turkey clearly plans to respond to Germany after the resolution that recognizes the 1915 Armenian events as genocide. While sources in Ankara previously said that Turkey will consider the issue along with the recent political developments in bilateral relations and that work is still ongoing, Bayraklı said Turkey will also consider what it stands to benefit from the decision as well as the position of its NATO allies prior to making a decision.

Bilateral ties between the two countries have become strained since the German parliament (Bundestag) passed a resolution describing the 1915 Armenian incident as genocide. In this regard, Bayraklı said: "Turkey will certainly give a strong response to Germany that would not harm Turkey in the meantime," adding that "The matter is mainly a security issue while it remains unclear what Turkey stands to benefit from granting [German access] to the İncirlik Air Base." When asked about reports in German media claiming Berlin sought a base near İncirlik, President Recep Tayyip Erdoğan said: "Such matters depend on developments. As a NATO member, such deployments benefit us. Germany or France building such a thing near İncirlik could benefit us, we should not forget," but he added that such matters can only happen with Ankara's permission.

Responding to a question regarding which steps Turkey will take following the recently approved resolution by Germany, Canikli said: "All of our institutions are currently working on the matter and deciding what can be done. This is a critical matter. … It is impossible for Turkey to refrain from responding to Germany's resolution." Ankara regards the mass number of deaths of Armenians in 1915 in Anatolia as the result of Armenian alliance with Russians who were invading the Anatolian region at the time and revolted against Ottoman forces. The massive relocation of the Armenians that ensued resulted in numerous casualties, according to Ankara. Last week, Erdoğan stressed that if Germany does not correct its "mistake," possible steps could be taken against the country.

Additionally, as discussed in the Cabinet meeting on Monday, Canikli said that measures to enhance combat forces against terrorism; including a ban on fertilizers containing ammonium nitrate until February 2017, "will be closely monitored, the sale of which is also prohibited." He said the government is currently working on ways to ease the process of work permit issuance for refugees; especially Syrians, saying that there is a draft resolution for the establishment of a special security organization which has yet to be finalized.

Citing sources in Ankara, Turkish media reported Germany aims to make this issue a fait accompli and the problems for a possible agreement, whose discussions are carried out by the coordination of the Foreign Ministry and National Defense Ministry, have not been removed yet. The sources also said that the Turkish Armed Forces (TSK) is cool toward opening the air base for the German initiative.The air base is located in southern Turkey east of Adana close to the Mediterranean coast. Ankara has allowed the U.S. to use it for its Syrian campaign against Daesh on the condition that it would not be used to support PKK-affiliated groups in Syria. Saudi Arabia has a presence at İncirlik as well.

When asked about stories in the German media that Berlin was seeking a base near İncirlik, President Recep Tayyip Erdoğan said, "Such matters depend on developments. As a NATO member, such deployments benefit us. Germany or France building such a thing near İncirlik could benefit us, we should not forget," but added that such matters can only happen with Ankara's permission.

As DAESH continues to threaten the international community, Germany deployed four additional Tornado surveillance aircraft as well as nearly 100 military personnel to the İncirlik Air Base in January. In mid-December 2015, Germany sent two Tornado aircraft following parliamentary approval of a military operation as part of the U.S.-led international coalition against Daesh militants in Syria.

In December, the German Federal Parliament approved a one-year support commitment for the coalition, which includes up to 1,200 troops, six Tornado surveillance aircraft, a refueling aircraft and a Bremen-class Augsburg frigate to support a French aircraft carrier in the eastern Mediterranean. Additionally, for 2016, Germany's mandate for anti-DAESH operations as part of the international coalition is to cost around 134 million euros.
RELATED TOPICS