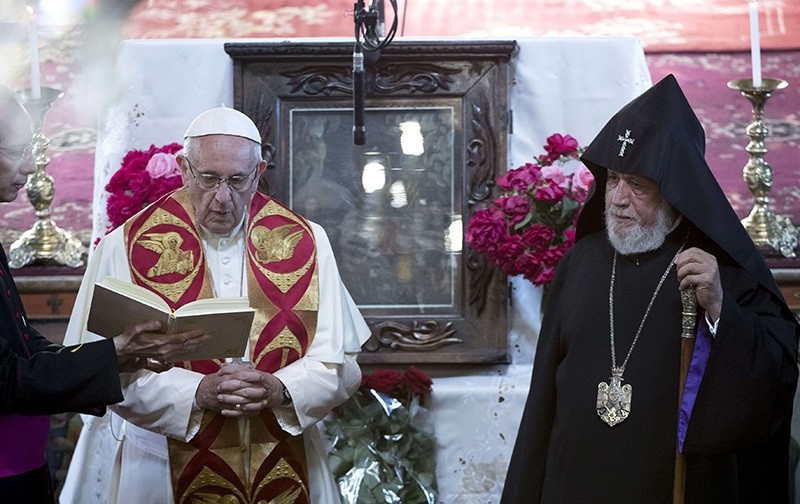 Deputy Prime Minister Nurettin Canikli on Saturday criticized Pope Francis's comments on the deaths of Armenians in1915 during his recent visit to Armenia, saying that the Pope's remarks have no relation to the truth and they reflect the mentality of crusaders.

Speaking to reporters during a visit to Giresun province in the Black Sea region, Canikli said: "It is unfortunate that the Pope made such comments. These are not impartial remarks. It has no relation to reality." Canikli said that the term genocide "does not comply with the truth. Everyone knows that. We all know it, the whole world knows it, and so do the Armenians."

Canikli also recalled a recent motion passed by the German parliament that described the 1915 events as genocide, saying these are political decisions that have no relation to historical facts. "These comments are political explanations and are based on religious factors," he added, arguing that those who claim that the events of 1915 were genocide accuse the Ottoman government of 1915 of allegedly carrying out "systematic genocide" against Armenians, as well as other Christian minorities. Turkey denies the allegations of genocide, but acknowledges that there were casualties on both sides during the events that took place during World War I.

From Turkey's perspective, the deaths of Armenians in eastern Anatolia in 1915 occurred after some Armenian nationalists sided with the invading Russians and revolted against Ottoman forces. A subsequent relocation of Armenians resulted in numerous casualties. Turkey describes the events of 1915 as a tragedy for both sides. Ankara has repeatedly proposed the creation of a joint commission of historians from Turkey and Armenia, along with international experts, to tackle the issue.