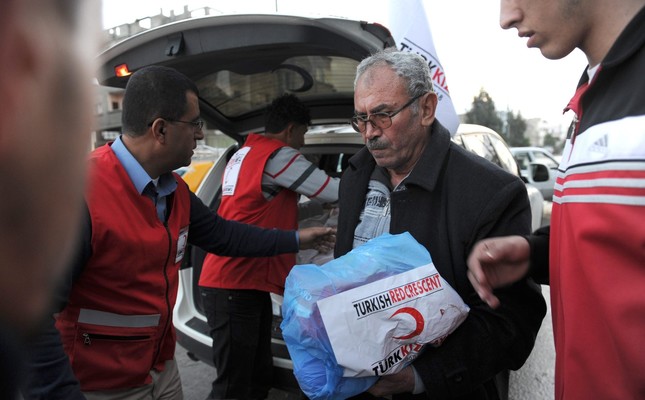 Turkish Red Crescent delivering humanitarian aid to the people of Gaza in 2013. (Photo by Kutup Dalgakıran)

Turkish and Israeli authorities reached a consensus after an exhausting six-year diplomatic struggle in Rome over the weekend, meaning that the Gaza blockade will be lifted. A deal between the two countries is expected to help solve problems in the region

Turkish and Israeli delegations met in Rome over the weekend to finalize the reconciliation deal between the two countries, and Ankara has succeeded in receiving an apology from Israeli Prime Minister Benjamin Netanyahu, compensation for the Mavi Marmara raid victims and the lifting of the Gaza blockade after six years of diplomatic struggle.

Under the agreement, Turkey will deliver humanitarian aid and other non-military products to Gaza and make infrastructure investments in the area. Along with new residential buildings, Turkey will complete the construction of a 200-bed hospital in Gaza.

The senior Turkish official said that concrete steps will be taken to address the energy and water crisis in Gaza as part of the deal. The amount of electricity and drinking water to Gaza residents will increase and new power plants will be constructed.

The Turkey-Israel agreement will make it possible for Turkey to launch major projects in the West Bank including the Jenin industrial zone.

The Turkish official also said that there are no references to Hamas in the agreement and added that Turkey will continue supporting the Palestinian state and the people of Palestine.

"The agreement represents a diplomatic victory for Turkey, which assumed a principled and determined stance after the Mavi Marmara attack," he said.

Later on Monday, Netanyahu called the US Vice President Joe Biden. The US State Department released a statement regarding the call. "Prime Minister Netanyahu of Israel called the Vice President today to thank him for encouraging normalization talks between Israel and Turkey. The Vice President congratulated the Prime Minister for progress toward reconciliation with Turkey, noting the significant positive security and economic benefits for both countries and the wider Eastern Mediterranean region," the statement read.

According to Israeli media outlets, Israel's security cabinet is set to convene this week to approve the deal. A senior Israeli official also said Sunday that Turkey and Israel have reached a deal to normalize relations.

Ankara has yet to make an official statement regarding the timing of the deal's approval. Prime Minister Binali Yıldırım is expected to hold a press conference tomorrow at 1:00 p.m. regarding the details of the deal.

Israel agreed to pay compensation to the victims of the Mavi Marmara raid in addition to apologizing, leaving the Gaza blockade as the only obstacle in the way of reconciliation between Turkey and Israel. Turkey wanted humanitarian aid to the Gaza Strip to be uninterruptedly guaranteed and insisted on solving the infrastructure and energy problems there.

After the Mavi Marmara raid, the Israeli government took a step toward reconciliation on March 24, 2013, when Israeli Prime Minister Benjamin Netanyahu, under the encouragement of U.S. President Barack Obama, apologized for the mishandling of the raid during a conference call with then Prime Minister Recep Tayyip Erdoğan. Israel also agreed to pay compensation to the families of the victims.

Having reached a consensus on lifting the Gaza blockade, Israel will reportedly write up a historic reconciliation deal with Turkey.

Turkey was a key regional ally of Israel until the two countries cut ties in 2010 following an Israeli raid on a Turkish aid ship bound for Gaza that resulted in the deaths of nine Turkish and one American activist while it attempted to break the blockade.

Amid an exhausting sequence of talks between Turkey and Israel, President Erdoğan and Prime Minister Binali Yıldırım met the leader of the Palestinian group Hamas, Khaled Mashal, in Istanbul on Friday.

Erdoğan and Mashal discussed how to resolve the disagreements among Palestinians as well as Turkish humanitarian assistance, a source from the presidency said.

During the meeting, Erdoğan emphasized that Turkey is keen on easing the distress of Palestinians, the source, who was not named due to restrictions on speaking with the media, told Anadolu Agency.

In April of 2014, rival Palestinian groups Hamas and Fatah signed a long-awaited reconciliation agreement that called for the formation of a Palestinian unity government tasked with overseeing Palestinian legislative and presidential elections.

Although the unity government was unveiled two months later, it has yet to take on a governing role in the Hamas-run Gaza Strip, while the relationship between the two factions remains beset by a host of longstanding differences.

Representatives of the two rival groups held a series of meetings in Doha in an effort to discuss ways of implementing the agreement, but there was no breakthrough.

As Turkish-Israeli relations are coming back to life under the influence of the reconciliation deal, Russia, a country that has been in a fierce diplomatic battle with Turkey recently, declared its support for the Turkish-Israeli thaw.

President Vladimir Putin gave his backing to the Turkish and Israeli efforts to reconcile after nearly six years of frosty relations.

"The fewer problems between governments, the better," Putin said after meeting with Netanyahu, according to the state TASS news agency, and added that he views reconciliation between Turkey and Israel as "exclusively positive."

Putin spoke after hosting Netanyahu in Moscow for talks that focused on boosting bilateral ties and trying to resolve the situation in Syria.

Share on Facebook Share on Twitter
Previous in Diplomacy German Defense Minister Ursula von der Leyen told the German newspaper... Next in Diplomacy An agreement to normalise ties with Turkey after six years will have...
DAILY SABAH RECOMMENDS