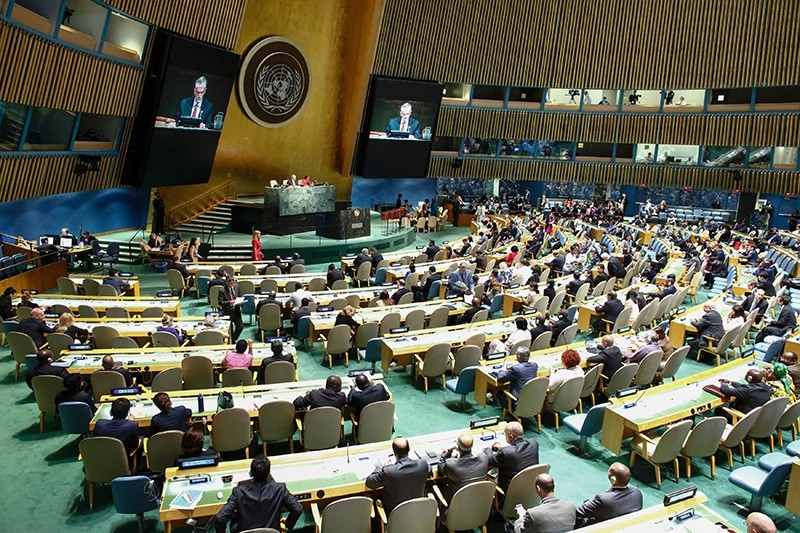 United Nations General Assembly President Mogens Lykketoft speaks before the Election of five non-permanent members of the Security Council at the United Nations in New York on June 28, 2016. (AFP Photo)
by Daily Sabah with AFP Jul 16, 2016 12:00 am

Egypt blocked a U.N. Security Council (UNSC) resolution backed by the U.S. on Saturday condemning the attempted coup in Turkey according to diplomats, although Cairo denied the move.

Following consultation with officials from key NATO ally Turkey, the U.S. proposed a draft statement calling on "all parties in Turkey to respect the democratically elected government of Turkey."

But Egypt, a non-permanent member of the UNSC, objected, according to diplomats. An Egyptian diplomatic source denied that Cairo had blocked the resolution. "This is a process that requires consensus," he said, adding that Egypt agreed to the "overall objectivity of the statement" that condemned the violence and called for restraint. "We proposed calling on all parties to respect the democratic and constitutional principles and rule of law," he said, in wording that changed the initial statement calling for respect for the "democratically elected government."

During the U.N. debate, Egypt argued that it was "not for the Security Council to decide whether the government is democratically elected," and it demanded that the relevant language be deleted, a diplomat said, speaking on condition of anonymity. Despite U.S. insistence, Egypt would not budge.

Turkey and several UNSC members, including the U.S., worried the statement would have been too weak without wording that explicitly supports the Turkish government. "So there won't be any statement," the diplomat said.

Such UNSC resolutions require unanimous approval from the 15-member group.

The brief draft statement had "condemned the violence and unrest in Turkey and stressed the urgent need for an end to the current crisis and return to the rule of law." It called on all parties to "show restraint and avoid any violence or bloodshed."