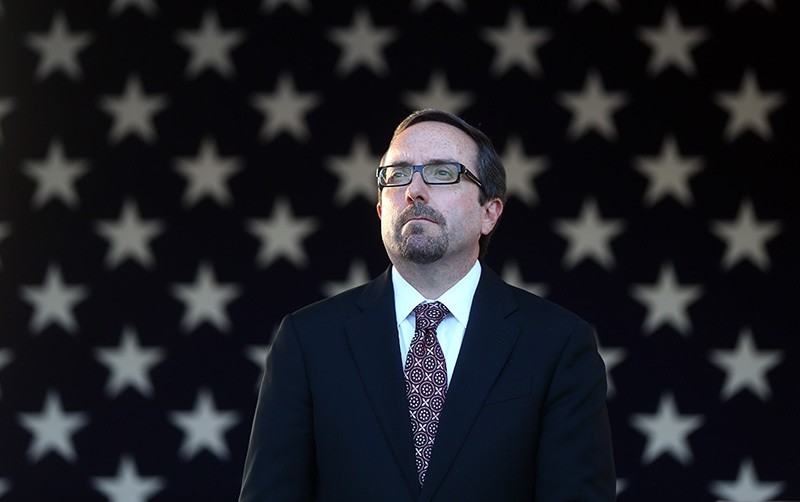 Bass said that media reports and comments by public figures that Washington backed an attempted coup were "categorically untrue" and such speculation harmed the NATO allies' friendship.

He said in a statement posted on the embassy's website that the United States was willing to provide assistance in Turkey's investigation of the abortive coup and would consider any extradition request if it met legal requirements.

Here's the statement from Ambassador Bass:

"The events of this weekend were deeply disturbing for all of us. We join our Turkish friends in mourning the tragic loss of life caused by attempts to violently overthrow Turkey's democratically-elected government. Coups have no place in a modern democratic society. I applaud the Turkish nation's resolve against this violent intervention and their support for democratic institutions.

From the first moments of the attempted coup, the highest levels of the United States government categorically expressed our strong position as Turkey's ally. President Obama, in the first statement by any world leader on the rapidly unfolding events, urged support for the democratically-elected government of Turkey. Secretary Kerry immediately reiterated to Foreign Minister Cavusoglu the United States' absolute support for Turkey's elected, civilian government and democratic institutions, and issued a public statement to this effect shortly after 2:00 a.m. on the night of the coup attempt. Secretary Kerry again underlined during his press conference in Luxembourg the following day that the United States, unhesitatingly, unequivocally stands for democratic leadership, for the respect for a democratically elected leader, and for a constitutional process in that regard, and that we stand by the Government of Turkey.

Some news reports – and, unfortunately, some public figures – have speculated that the United States in some way supported the coup attempt. This is categorically untrue, and such speculation is harmful to the decades-long friendship between two great nations.

With regard to the question of possible involvement in the coup attempt by persons residing in the United States – we have been clear that the United States would be willing to provide assistance to Turkish authorities conducting their investigation into the coup attempt. If Turkey decides to submit an extradition request for anyone legally resident in the United States, it will be considered under the terms of the U.S.-Turkey extradition agreement. To that end, U.S. Government officials in the U.S. and in Turkey, including representatives of the U.S. Department of Justice, are prepared to work with their counterparts and to discuss what will be required to meet the legal and evidentiary standards set by our bilateral extradition treaty. I underscore that our extradition treaty and U.S. laws have specific requirements that must be met before a suspect individual can be transferred to another nation's jurisdiction.

I am aware that false words, attributed to me, are currently being circulated on social media, largely by users who appear to be sympathetic to Fethullah Gulen, suggesting a lack of respect for Turkey's democratically elected government. That purported statement is an absolute fabrication that appears designed to heighten tension between the United States and Turkey and undermine Turkey's security.

As I have said many times, Turkey and the United States are close friends and strong allies. We are bound by shared values, deep historic ties, and a NATO alliance, pledging each of us to the mutual defense of the other.

I reject the narrative that suggests the United States is trying to undermine Turkish security and prevent Turkey from being a strong, successful country. Our alliance shows that we have continually invested in Turkey, in its security and its prosperity, and that we remain committed to helping everyone in this country realize a future in which Turkey and the Turkish people are strong and prosperous."