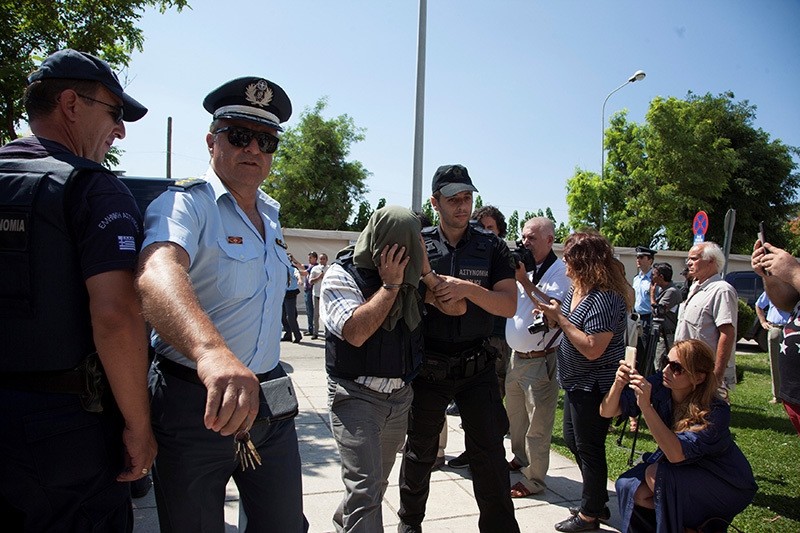 One of the 8 Turkish soldiers who fled to Greece in a helicopter and requested political asylum after a failed military coup against the government, is escorted to courthouse of the n. city of Alexandroupolis, Greece, July 21, 2016. (Reuters Photo)
by Daily Sabah Jul 21, 2016 12:00 am

The eight Gülenist coup soldiers who fled to Greece in a Skorsky helicopter after the coup on July 15 failed were sentenced to two months in jail by a Greek court for entering the country illegally.

The officers, sought by Turkey to face a military trial at home, have requested asylum in Greece and will remain in police custody until their cases on that issue are heard.

Earlier this week, Greek Prime Minister Alexis Tsipras contacted President Recep Tayyip Erdoğan and Prime Minister Binali Yıldırım to notify them of the issue. Tsipras ensured that the Greek authorities will do whatever is necessary to work together with the Turkish authorities. He stated that there is no room for coups in any democratic state and that the Greek government stands by and respects the elected government of Turkey and the will of the Turkish people, according to a Turkish presidential source. Erdoğan thanked Tsipras for his sentiments of support, the source said, speaking on the condition of anonymity due to restrictions on speaking to the media.

A Blackhawk military helicopter landed at the airport in the city of Alexandroupolis in northeastern Greece and the passengers were arrested for illegal entry into Greece.

The Greek government said the Blackhawk helicopter would be returned to Turkey as soon as possible and added that the asylum demand of the eight coup-involved staff will be examined. Later on, Greek officials told Foreign Minister Mevlet Çavuşoğlu that they would extradite the pro-coup soldiers.

The ministry said the helicopter gave a distress signal at 10:45 a.m. local time and landed six minutes later. They then reportedly requested political asylum, according to Greek police officials.

Çavuşoğlu said that Turkey has requested the extradition of the soldiers who escaped to Greece, while Greek authorities said they are ready to cooperate with Turkey and will do what is necessary.