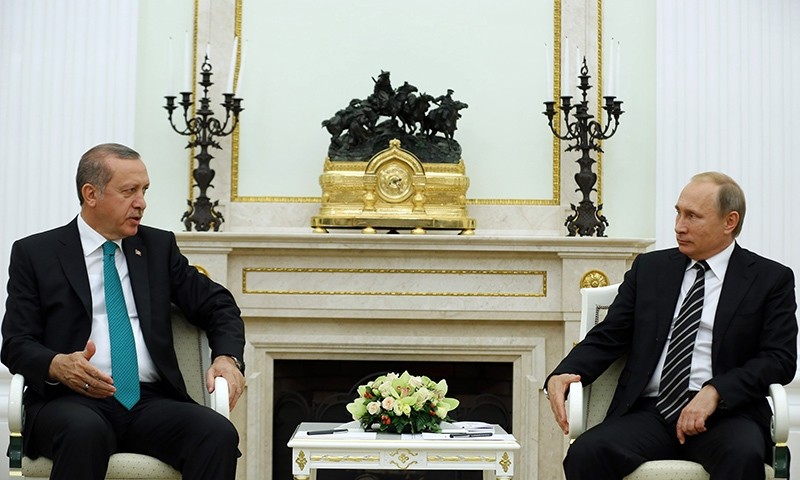 President Recep Tayyip Erdoğan is expected to visit Russia on Aug. 9, the first time since the jet-downing crisis between the two countries, said Deputy Prime Minister Mehmet Şimşek on Tuesday. Şimşek was the first high-level official to visit Russia since November's crisis. He held high-level ministerial meetings in Moscow yesterday together with Economy Minister Nihat Zeybekci.

Şimşek, who is attending a series of high-level ministerial meetings in Moscow, said that the president will meet with his Russian counterpart Vladimir Putin in St. Petersburg.

Relations between Moscow and Ankara deteriorated in November after Turkish jets downed a Russian Su-24 fighter jet for violating Turkish airspace. After the incident in November, the furious Russian government responded by announcing sanctions against Turkey. Turkish food imports were blocked at Russian border gates after Jan. 1. Moscow called on Russians to not visit Turkey and opened up investigations into Russian tourism agencies organizing tours to Turkey. Russia refused to issue work permits for Turkish citizens and called for an end to visa-free travel.

It has been eight months since Turkey downed a Russian warplane that violated Turkey's airspace near the Syrian border on Nov. 24, 2015. The restoration of ties between Ankara and Moscow took only one month. Erdoğan and Putin exchanging messages and calling on each other to take a step and try to better ties. "Russia wants to restore relations with Turkey; we still don't understand why our plane was shot down," Putin told a press conference in Athens in late May, signaling a desire to normalize ties. In response to Putin's positive stance on a possible thaw between Turkey and Russia, Erdoğan said in early June that just because the Russian pilots "made a mistake" that led to an incident, that should not affect ties.

The normalization of relations between Turkey and Russia gained momentum in June, a move that indicated the restoration trade ties after Erdoğan sending a letter to Putin to celebrate Russia's National Day, which marks the country's post-Soviet constitution, and Putin thanking Erdoğan, along with the Russian ambassador attending an iftar dinner at the Presidential Palace in Ankara. Erdoğan's letter of condolence and regret set a basis for an end to the crisis between the two countries. Shortly after the letter, 45 minutes on the phone with Erdoğan was enough for Putin to call off sanctions against Turkey.

A high-level Turkish delegation visit to Moscow has paved the way for visa-free travel between Turkey and Moscow. After high-level ministerial meetings, Russian deputy Prime Minister Arkady Dvorkovich hinted at the abolition of visas, the granting of which was suspended by Moscow after Nov. 24. "The visa restrictions between the two countries can be abolished on the condition that necessary safety levels will be managed," Dvorkovich said.

Stressing that Turkey and Russia have agreed to hold consultations at the level of foreign ministers, authorities, law enforcement agencies and special services on a visa-free regime, Dvorkovich said they needed guarantees to make sure terrorist organization- related persons would not enter Russia. "When appropriate authorities reach a mutual understanding in this issue, operations to abolish the visa restriction will be started," said Dvorkovich, adding that on Turkey's request, the governments of both countries had agreed on separate assessments about regulatory measures for travel categories for businesspeople as well as citizens. The final decision will be made after related authorities meet, Dvorkovich said.