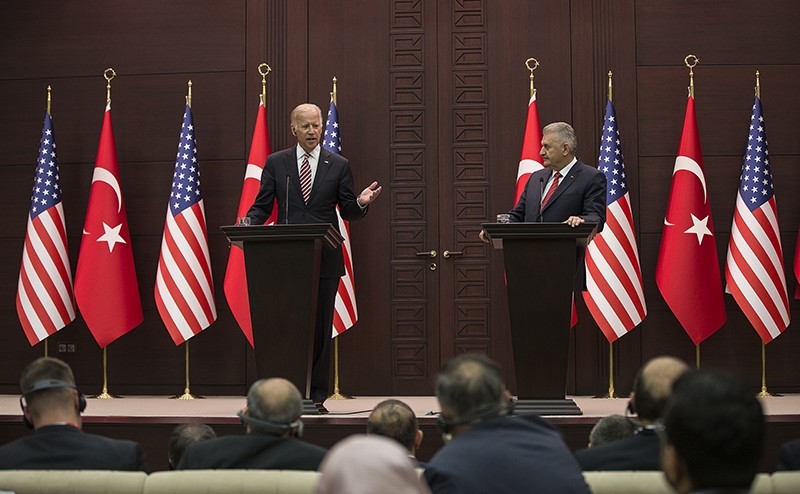 The U.S. Vice President Joe Biden on Wednesday expressed support for Turkey's democratically elected government, praised the determination of the Turkish people in protecting democracy and highlighted that the U.S. will continue to cooperate with Turkey regarding the extradition of Fetullah Gülen, the mastermind behind the July 15 failed coup attempt.

Biden arrived in Ankara on Wednesday amid heavy agenda on security issues and cooperation on terror.

Speaking at a joint press conference with Prime Minister Binali Yıldırım, Biden urged the PKK's Syrian affiliate to retreat to east bank of Euphrates and said they could lose U.S. support if they fail to do so.

Underlining that the U.S. is cooperating regarding the extradition of Gülen, Biden said that legal experts from the U.S. are currently working with their Turkish counterparts to fulfill all the requirements needed for the FETÖ leader's extradition.

"We are cooperating with Turkish authorities. Our legal experts are working right now with their Turkish counterparts in the production and evaluation of the material and evidence that need to be supplied to the U.S. court, that is required by our law in the extradition treaty."

He continued by stressing that the U.S. did not have prior knowledge of the coup attempt. "The U.S. has no, no, no, no interest whatsoever in protecting anyone who has done harm to an ally. None. But we need to meet the legal standard requirement under our law."

The two main topics were the extradition of the leader of the Gülen terror-cult that was behind the bloody coup attempt on July 15 and the U.S.'s continued support of the PKK terrorist organization's Syrian wing, the People's Democratic Union (PYD).

Adding to Biden's remarks, Prime Minister Yıldırım said if the process of extraditing Gülen is expedited, the Turkish people's disappointment would be dispelled "very quickly."

"We should not let the July 15 coup attempt, nor any other issue disrupt U.S.- Turkey relations" Yıldırım said.

The arrival of technical unit to Turkey and the assessment of Gülen's extradition shows the matter is being taken seriously by the U.S., Yıldırım added.

Yıldırım also highlighted that Turkey does not accept the existence of a new Kurdish formation on its southern borders, in reference to PKK's Syrian affiliate PYD.

During his one-day visit to the Turkish capital, Biden was scheduled to meet with high-level officials, including President Recep Tayyip Erdoğan, Prime Minister Binali Yıldırım and Parliament Speaker Ismail Kahraman. He also toured the bombed parliament building during his visit.

Turkey accuses Fetullah Gülen of masterminding the failed putsch and has demanded the U.S. extradite Gülen to face trial.

Turkey's government has said the defeated coup, which left over 240 people killed and nearly 2,200 injured, was organized by followers of Gülen, who has lived in self-imposed exile in the U.S. state of Pennsylvania since 1999, and his Gülenist terror group (FETÖ).