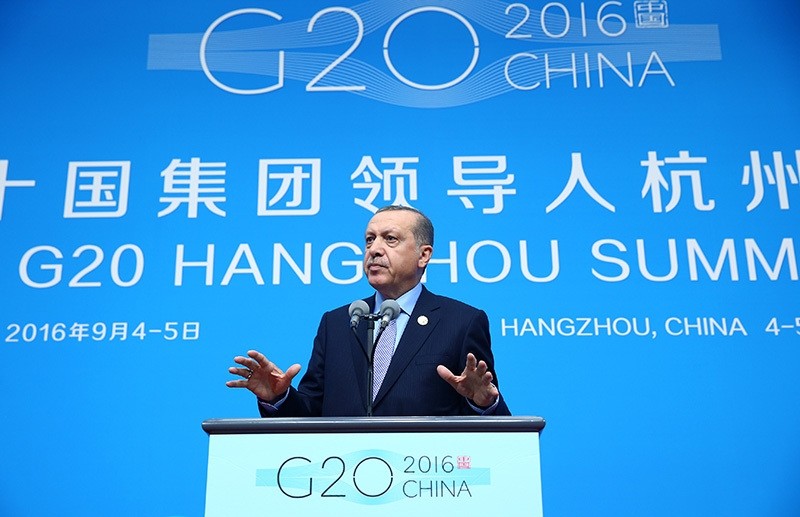 President Recep Tayyip Erdoğan on Monday urged world leaders for a globally united stance against all terror groups without classifying them as "good terrorists or bad terrorists."

Speaking during a press conference following the end of the G20 Summit in the eastern Chinese city of Hangzhou, Erdoğan said: "Terrorism has increased its threat against the world and continues to day by day. The bloody coup attempt [in Turkey] is also another form of terrorism. This time around, Turkey, which has been fighting against the PKK, the People's Protection Units (YPG), the Democratic Union Party (PYD) and DAESH, also fought against a terrorist group that infiltrated the Turkish Armed Forces." He added that if a globally united stance is not established, sooner or later, terror will hit those who remain silent against terrorism.

"During the attack, 241 people, from all roots and regions of our country, were martyred," President Erdoğan said, adding that the coup attempt was an example of how daring terror organizations have become.

He added that the Ankara-backed Free Syrian Army (FSA), the moderate opposition, successfully cleared DAESH from Turkey's southern border in Syria. "Now, the real owners of Jarablus are relocating to their towns, as it has been cleared of DAESH," the president said. "Turkey's Jarablus operation in Syria reflects Turkey's determination in the fight against terrorism. We would like the G20 to be more effective in finding solutions to the global issue," he added.

Commenting on the Syrian crisis, the president said that Syria remains a "bleeding wound of the world" that has perpetuated the rise of terror groups, resulting in many lives being lost in the country and sparking a global humanitarian crisis.

Erdoğan added that although there was a common agreement on the effectiveness of Turkey's safe zone proposal in Syria, no concrete steps have been taken, which has further complicated the situation in Syria. Ankara has repeatedly called for the establishment of a safe zone for refugees across its southern border between Jarablus on the western bank of the Euphrates and Azaz once DAESH is removed from the territory.

President Erdoğan also criticized the West's stance regarding the refugee crisis and said over 600,000 civilians have been killed in Syria.

"The protectionist and even racist attitude adopted by the West regarding the refugee issue is a shame for humanity," Erdoğan said, adding that it is unreasonable to defend the Assad regime, which is responsible for the deaths of countless civilians.

Erdoğan also said that Turkey has been in talks with Russia over a solution to the crisis in Syria's Aleppo.

"Now we are developing a cooperative for the Aleppo region. We are working towards establishing a cease-fire. We want the cease-fire to begin before Qurban Bayram [on Sept. 12] and for the people of Aleppo to be liberated from the bombings," Erdoğan said.

Meanwhile, President Erdoğan said that Turkey will continue hosting refugees with an open-door policy, even if Ankara does not receive financial aid.