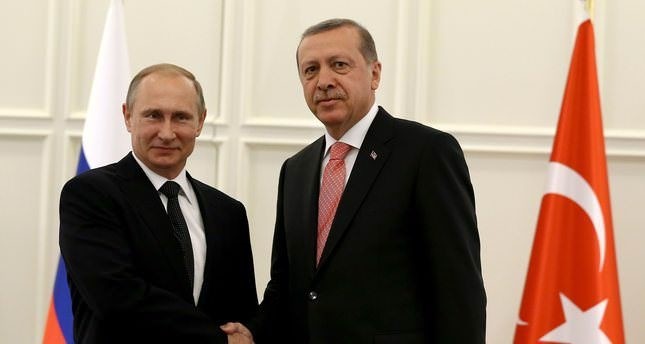 President Recep Tayyip Erdou011fan (R) and his Russian counterpart Vladimir Putin
by daily sabah Sep 08, 2016 12:00 am
President Recep Tayyip Erdoğan and his Russian counterpart Vladimir Putin held a phone call late on Thursday in which the two leaders agreed to to continue efforts for a solution in Syria, the Kremlin said in a statement.

The Turkish Presidency also released a statement regarding the phone call. The presidency said that the latest developments in Syria were discussed in the call while "President Erdoğan reiterated the importance of a possible ceasefire in Aleppo."

The Operation Euphrates Shield was also one of the major topics of discussion, the presidency said. "The importance of the fact that Turkey's border with Syria is now completely free of Daesh terrorists was emphasized in the call," the statement added.

The Turkish military launched the cross-border operation Operation Euphrates Shield on August 24 along with the U.S.-led coalition and Free Syrian Army (FSA) in Syria's northern border city of Jarablus to clear the area from the Daesh terror organization.

With the help of the Turkish military, the FSA connected the Azaz and Jarablus pockets, completely clearing Daesh terrorists from the Turkish border.

Amid speculation about whether the FSA would continue marching southwards to liberate al-Bab from Daesh in cooperation with the Turkish military, the opposition did not hesitate to storm Daesh-held villages in the region south of the al-Rai.
Last Update: Sep 09, 2016 3:37 pm
RELATED TOPICS