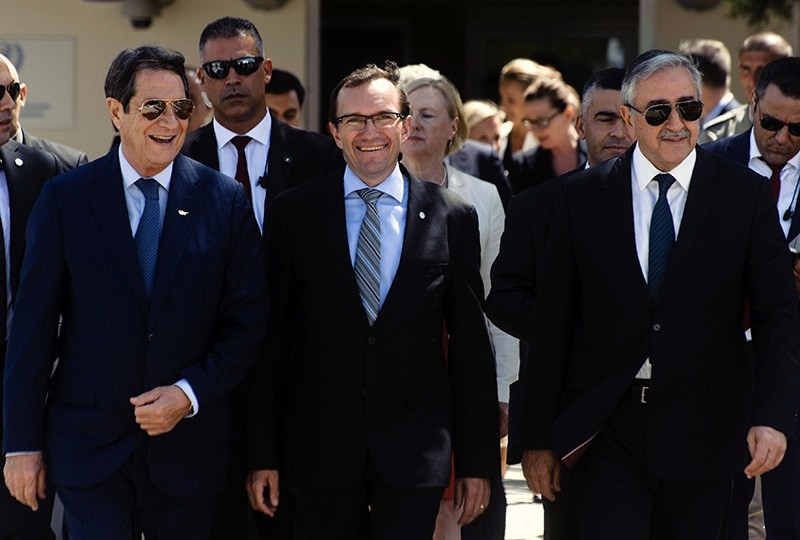 Cypriot leaders will meet UN chief Ban Ki-moon later this month, his envoy said Wednesday, as they push for a deal on reunifying the Mediterranean island this year.

"Cognisant of the remaining challenges, the two leaders are committed to continuing and intensifying their efforts... in the coming months with the aim of reaching a comprehensive settlement agreement within 2016," the UN envoy said in a statement.

"For this purpose, the two leaders will hold a joint meeting with the secretary general of the United Nations on September 25, in New York," he said.

The division between Greek and Turkish Cypriot communities is one of the world's thorniest and longest-running diplomatic problems and has defied repeated efforts at a solution.

Long-stalled UN-brokered talks were relaunched in May 2015 in what is seen as the best chance yet to end four decades of division.

Anastasiades and Akıncı remain far apart on a string of core issues left over from Turkey's intervention to the island following an Athens-inspired Greek Cypriot coup seeking union with Greece.

Eide said the meeting will "take stock of the state of play in the negotiations, inform Ban Ki-moon of their achievements to date as well as of the challenges ahead".

"They will exchange views with him and will request him to intensify his personal engagement in the process in the months to come."

The Norwegian envoy was speaking after the two leaders completed an intensive phase of talks that began last month.

He said the leaders made "significant progress" on outstanding issues, including governance and power-sharing but remain divided on the vexed issues of property, security and territorial adjustments.

It has always been agreed that the Turkish Cypriots will cede territory controlled by their breakaway state in the north to the Greek Cypriot component of a future federation.

But the details of which areas are to be handed over are sensitive as they will decide the number of Turkish Cypriots who will be displaced from their homes.

The issues of how many people will be allowed to return to their former homes and how many will receive financial compensation are also huge stumbling blocks.

The costs of compensation are estimated to run to billions of euros and Eide said the financial aspects of a settlement would also be discussed in New York.

At the start of the intensified process last month, the UN envoy said he had "high expectations" that the coming sessions could produce a clear road map for peace.

But he has also said that while Ankara remains supportive of the process, the failed coup in Turkey in July was a reminder that Cyprus's window of opportunity may not "remain open forever".

Turkey, along with Greece and Britain, has guarantor powers in Cyprus under the agreements that led to the island's independence in 1960.

The Greek Cypriots want to scrap this arrangement, while the Turkish Cypriots are reluctant to do so.

Any agreement the two leaders reach will have to be put to simultaneous referendums on either side of the island.

A previous peace deal brokered by then-UN chief Kofi Annan in 2004 was backed by a significant majority of Turkish Cypriot voters but overwhelmingly rejected by their Greek Cypriot counterparts.

The outcome meant that Cyprus joined the European Union later that year still a divided island.

Anastasiades's internationally recognized government represents the island in the bloc and EU laws are suspended in the breakaway north, depriving the Turkish Cypriots of the full benefits of membership.