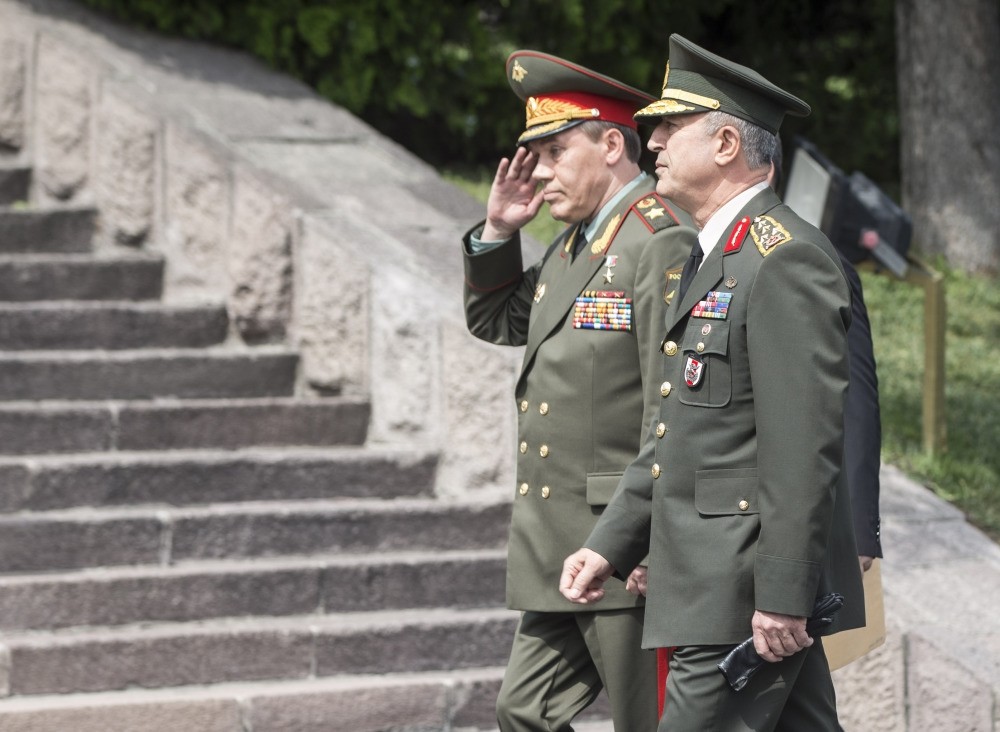 Akar received Gerasimov at the General Staff headquarters following a greeting ceremony with full military protocol. The two discussed the latest developments in Syria and bilateral military cooperation. Akar also gave information to his counterpart about Operation Euphrates Shield, which was initiated by Turkey to clear the southern border of DAESH.

"Russia is the most important actor regarding a solution for the Syrian crisis. Possible military cooperation between Turkey and Russia may clinch relations between the two countries and undoubtedly it is in favor of both countries," Eşref Yalınkılıçlı, a Eurasian analyst and journalist told Daily Sabah.

He underscored that military cooperation between Ankara and Moscow is in an important phase regarding forming a strategic alliance between the two countries and reducing geopolitical risks in the region.

"Turkey's role in fully purging Syrian territory of DAESH is extremely important as it is the sole actor capable of conducting a comprehensive ground operation in Syria. On the other hand, Turkey knows that a solution is not possible without Russia, so this situation creates a need for cooperation between both countries," he added.

The United States and Russia agreed on a plan to impose a cease-fire in the Syrian civil war and lay the foundation for a peace process last Friday. The Syrian truce was extended by a further 48 hours following an agreement between both sides.

Foreign policy coordinator at the Foundation for Political, Economic and Social Research (SETA), Ufuk Ulutaş, said that the two countries still have many disagreements over the Syrian crisis, which makes joint strategy in the field less likely.

"I guess the main topic about meeting is not creating a common strategy in Syria, but rather about deconfliction efforts in the area. Besides, Syria's political future may have a more important place in the meeting than possible military cooperation," Ulutaş said. He also added that Turkey proved its operational capability with Operation Euphrates Shield, which paved the way for Ankara to be taken more seriously by Russia in any potential deal.

Although Russia is one of the main backers of Syrian regime leader Bashar Assad while Turkey backs opposition forces such as the Free Syrian Army (FSA), both sides are targeting the DAESH terror group in Syria. Meanwhile, the Turkish Armed Forces (TSK), partnering with the Free Syrian Army (FSA) forces, initiated Operation Euphrates Shield on Aug. 24 to liberate northern Syria towns from DAESH.

Gerasimov's visit had been expected in late August after President Recep Tayyip Erdoğan went to Saint Petersburg for a landmark reunion with Russian President Vladimir Putin. But it was then postponed without further explanation.

Relations between Turkey and Russia hit a low in November 2015 after Turkish jets downed a Russian Su-24 bomber near the Syrian border for violating Turkish airspace. Erdoğan and Putin exchanged harsh ultimatums in the wake of the jet crisis and the Kremlin imposed sanctions on various Turkish industries. However, relations between the two countries remained sour until the issue was largely resolved on June 29 after a letter and subsequent telephone calls between the two countries' leaders.

Putin gave his support to Turkey after the July 15 failed coup attempt and said he stood by the elected government, offering his condolences to the victims of the attempt. On July 22, Russia also lifted restrictions on flights to Turkey, which had been implemented temporarily following the coup attempt, after Turkish officials assured their Russian counterparts that additional security measures were being taken.

More than 300,000 people have been killed in the five-and-a-half-year war in Syria, while U.N. peace efforts have failed to unite the many players in the conflict behind a political settlement.