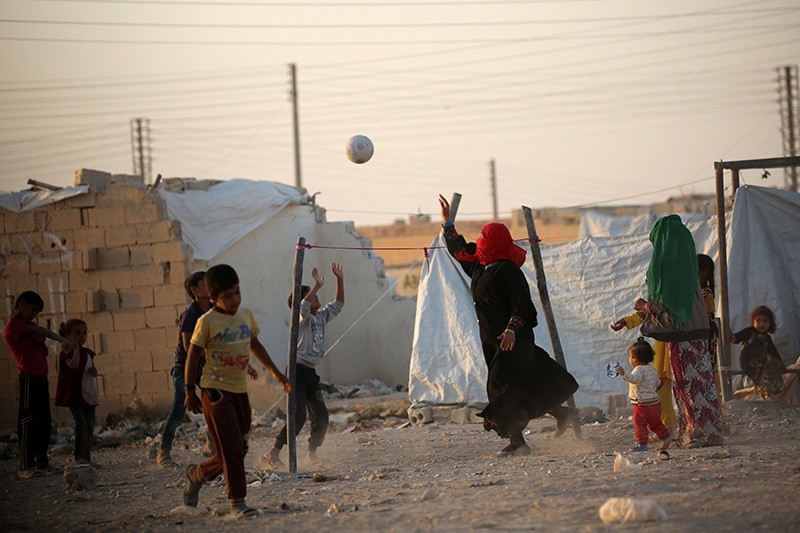 Displaced Iraqis who fled fighting in the Mosul area play volleyball at a camp for internally displaced people on October 17, 2016 in the northeastern town of al-Hol in Syria's Hasakeh province. (AFP Photo)
by Compiled from Wire Services Oct 18, 2016 12:00 am

France will host an international meeting Thursday on the future of Mosul, French Foreign Minister Jean-Marc Ayrault said on the second day of a major offensive to retake Iraq's second city from the Daesh group.

Speaking in a press conference his Iraqi counterpart Ibrahim al-Jaafari, Ayrault said that the meeting would gather more than 20 countries and international organizations to come up with a plan to protect civilians, distribute aid and address questions about governing areas newly liberated by the Daesh group.

The United States, Britain, Saudi Arabia and Turkey are among the countries due to attend the meeting to be co-hosted by Iraq. Ümit Yalçın, undersecretary of the Ministry of Foreign Affairs, will represent Turkey in the meeting.

But Iran and Russia, which provide military backing to Bashar al-Assad, who is opposed by Western and Gulf Arab states, have not been invited.

Ayrault said Russia had indicated Iraq was not its concern, whereas Iran, which has significant influence in Iraq, had not been invited to the Paris meeting due to tensions between Riyadh and Baghdad that needed to be eased first.

"For now we need to get consensus between everyone else, which isn't simple. I've seen some quite virulent exchanges in meetings between Saudi Arabia and Iraq so we need to favour this dialogue first. We're not ignoring Iran, but it has to be step by step."

"We must anticipate, plan for the 'day after', and the stabilization of Mosul after the military battle," Ayrault said.

"We must win the war but also look at everything that will enable us to win the peace," he added.

The French foreign minister said the international coalition fighting Daesh also had a "responsibility" to retake Raqqa, in Syria, which would be the last major city in either country under the group's control if Mosul falls.

"Not to go on to Raqqa would be a bad mistake," Ayrault told reporters.

"If we want to fight effectively against terrorism it is essential to take this city."

The long-awaited offensive on Mosul was launched on Monday, with some 30,000 forces involved in Iraq's largest military operation since the pullout of US troops in 2011.

The U.S. military, which is leading a coalition providing air and ground support, said Iraqi forces looked "ahead of schedule" but warned the battle would be long and difficult.

The coalition's defense ministers will meet in Paris next Tuesday to assess progress in the battle for Mosul.

US Defense Secretary Ashton Carter will be among 13 ministers at the talks, an aide to French Defense Minister Jean-Yves Le Drian said.

Le Drian said Tuesday the battle for Mosul could take "several weeks" or even months.

The ministers are also expected to stress the importance of routing the terrorists from Raqqa.

The coalition is concerned that Daesh will attempt to move fighters and military equipment from Mosul to Syria as the offensive intensifies.