Turkey skeptical on pledged US support against Daesh in Syria, Iraq 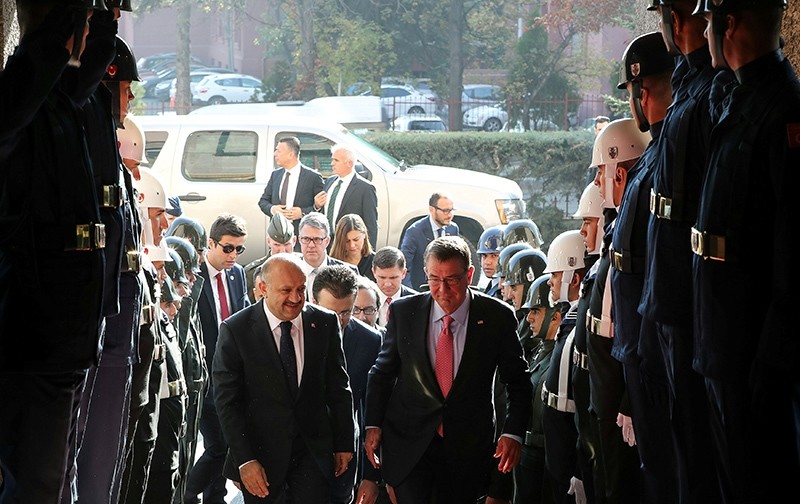 Following the US Secretary of Defense Ashton Carter’s visit and his pledge to support initiatives taken by Turkey to protect its borders with Iraq and Syria, Turkey is likely to wait and see whether the U.S.’s support is put into practice, as it partners with the PYD, a group designated a terrorist organization by Turkey

U.S. Secretary of Defense Ashton Carter said the U.S. supports initiatives taken by Turkey to protect its borders with Iraq and Syria and that it wants Turkey in anti-terror operations against Daesh during a visit to Ankara on Friday. Ankara remains skeptical on the support due to the tensions between Turkey and the U.S. over the route and strategy in the fight against Daesh. According to reports, Carter told his Turkish counterpart, Defense Minister Fikri Işık, that it is reasonable for Turkey to follow the developments in Iraq and Syria.

He reportedly said the U.S. supports precautions taken by Turkey to protect its borders and added the U.S. would like Turkey to participate in operations against Daesh terrorists.

Meanwhile late Friday, Turkey and Iraq have reached an agreement in principle that could eventually allow a Turkish role in the campaign to retake the city of Mosul from Daesh, U.S. defense Secretary Ash Carter said after talks with President Recep Tayyip Erdoğan.

"I think there's agreement there in principle but now we're down to the practicalities of that ... and that's what we're working through," he told reporters as he ended his trip to Ankara.

"Secretary Carter appreciates Turkey's critical participation in the Counter-ISIL (Daesh) coalition and its strong interest in playing a role in the Mosul campaign. Ultimately that is a decision for the government of Iraq. The United States will continue to work with leadership in both countries to bridge differences that remain, so we can remain focused on our common enemy - ISIL (Daesh)," a statement sent by U.S. Office of the Secretary of Defense to Daily Sabah said.

Evaluating Carter's visit to Turkey, deputy coordinator of the Ankara-based Foundation for Political Economic and Social Research (SETA) Professor Muhittin Ataman said Carter's words about Turkey are likely to be just a "diplomatic delicacy," adding that U.S. policy has long been a stalemate in the Middle East. "U.S. policy towards it's 'partners' in the Middle East has been inordinate for a long time. We saw before that the U.S. supported terrorist organizations such as the PYD and YPG against Turkey in Syria, or took sides with Iran and paramilitary militias linked with it such as the Hashd al-Shaabi, against Turkey in Mosul. We will see whether Carter's words were composed of just diplomatic talks or if his country's imbalanced stance will change," Ataman said to Daily Sabah.

Işık told Carter that Daesh terrorists pose a great threat to Turkey and that Turkey has taken significant steps to eliminate the threat along its borders by launching Operation Euphrates Shield.

He highlighted that the success of the Turkey-backed operation, which liberated many areas including the Daesh stronghold of Dabiq, has shown that the Free Syrian Army (FSA) can accomplish a lot against Daesh if it is properly supported.

In response, Carter congratulated Turkey for liberating Dabiq and also thanked it for accepting millions of refugees from neighboring Iraq and Syria. "We expect the PKK/PYD/YPG elements to withdraw to the east of the Euphrates River, as previously promised," Işık said and warned his U.S. counterpart that such terrorist organizations cannot be relied on.

During the visit, Carter also highlighted that the U.S. will continue to be a strong ally of Turkey during his visit to the Grand National Assembly of Turkey (TBMM), which was bombed by Gülenist Terror Group (FETÖ)-linked soldiers on the night of the July 15 failed coup attempt.

Carter expressed his condolences for the lives lost in the July 15 failed coup attempt and said the people who sacrificed their lives for democracy are heroes. "We will continue to support democracy in Turkey," Carter said.

President Recep Tayyip Erdoğan also welcomed Carter at the Presidential Complex in Ankara where the two had a 30-minute long closed-door meeting.

In addition to Turkey, the secretary will also travel to the United Arab Emirates, France and Belgium between Oct. 20 and 27 to meet with "key partners in the campaign to deliver Daesh a lasting defeat," a statement by the Defense Department said.

Carter will also participate in his fifth NATO defense ministerial as secretary of defense.

Carter began his trip on Friday Oct. 21 in Turkey. He met with Turkish leaders to discuss a range of security challenges in the region including the latest developments in Iraq and Syria and will then head to the United Arab Emirates for meetings with Emirati leaders.

Regarding Carter's visit, Turkish Deputy Minister Numan Kurtulmuş said Turkey will wait and see whether the U.S. will put Ashton Carter's words into practice in Mosul. "It's a positive development that the U.S. came to this position. Turkey will be on the ground in the Mosul Operation," Kurtulmuş said.

"Before the Mosul operation was launched, the U.S. tried to take Turkey out of the process, however, Turkey decisively asserted its stance regarding involvement in the operation. The U.S. unwillingly shifted its position and established controlled relations with Turkey," Talha Köse, assistant professor at Political Sciences and International Relations department of Istanbul Şehir University, told Daily Sabah.

Köse added that the presence of Shiite fanatical paramilitary groups such as the Hashd al-Shaabi and their unpredictable actions have forced U.S. to cooperate more with Turkey. "The U.S. foresees that the Mosul operation will likely be very costly without Turkey. That's the main reason for the shift in the U.S.'s approach," he said.

Meanwhile, as military operations to retake Mosul from Daesh continue, some officials have voiced concern for the possible consequence of a sectarian conflict in the region.,

"There is the risk of an internal conflict between peshmerga forces and Hashd al-Shaabi (Shia militia) after Daesh has been completely removed from Iraq," said Iraq's former Chief of the General Staff Babekir Zebari to Anadolu Agency.

"The weakest links in Iraq are Sunni Arabs and Turkmens," added Abdul-Nasir al-Mahdawi, the former governor of Iraq's Diyala province. "Kurds get international support and the Shia is in power; Turkmens have no power protecting them. It is quite normal that Turkey cares about them," he said. Mahdawi suggested that Iraq and Turkey should cooperate to ensure that none of the ethnic groups in the region are targeted.

Turkey's Prime Minister Binali Yıldırım made comments regarding the recent developments at regional level during visit to Afyonkarahisar for AK Party's retreat on Friday as he noted that all incidents occurring in Mosul and Iraq at large concerns Turkey as a neighboring state. Continuing on by addressing at Turkey's operations against terror groups in northern Syria, Yıldırım said "Turkey's actions in Syria are completely based on eliminating terror group while establishing our country's border security at the same time. We perceive Daish, PYD, YPG as terror groups thus it is not our concern what anyone tells us regarding our combat against them." Stressing that Turkey is determined to do all means of actions to establish the country's and the borders' security, Yıldırım also reaffirmed that Turkey is not 'eyeing' on anyone's land. In regards to the meeting with US Defence Secretary Ashton Carter during a visit to Ankara on Friday, Prime Minister Yıldırım said that Carter had reassured US'promise on withdrawing PYD/YPG from Manbij.

Adding on by noting that all actions are being taken in coordination with the coalition members, Turkey's Prime Minister reminded that Iraq is at country's 350 km border and said "unfortunately, for years the terror group [referring to PKK] is trespassing our borders and giving headache to us, killing our civilians, soldiers. Thus, Iraq must foremost disciple those terror groups that are residing in Iraq and giving headache to Turkey. If it cannot accomplish this, then we all the rights to take any measures to establish our country's security." He also added that the future of Iraq and Syria closely concerns Turkey as he further noted that Turkey not only is a neighboring state to those two countries but also shares similar history and culture. Responding to a question on a possible airstrike with the coalition, Yıldırım said Turkey is on stand-by and will participate whenever
necessary.

* Contributed by Mustafa Kırıkçıoğlu in Istanbul and Merve Aydoğan in Afyonkarahisar