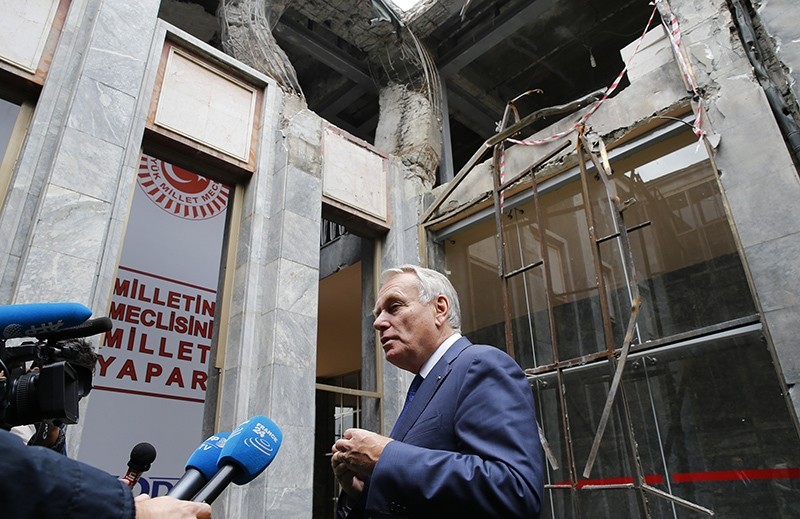 French Foreign Minister Jean-Marc Ayrault praised the courage of Turkish people and parliamentarians during the July 15 coup bid as Parliament Speaker Ismail Kahraman gave him a tour of the bombed parliament building in Ankara Monday.

Ayrault said his presence in Ankara showed that France stood in solidarity with Turkey in the face of its coup attempt, which was why he wanted to start his official visit by seeing the damaged sites of the Turkish parliament.

"The parliament is the symbol of Turkish democracy and it was hit at the heart. As you know, France had immediately condemned the unacceptable coup attempt.

"We appreciated the bravery of parliament members on that night. The Turkish people acted bravely as well and poured out into the streets and said 'no' to the coup attempt," he said.

Kahraman said July 15 was a test of Turkey's democracy.

"You saw the bombed sites. We had a terrible night [on July 15]. It was a kind of democracy test. All in all, the [Turkish] society showed that it had absorbed democracy and thwarted the coup together," he said.

At least 241 people were killed and nearly 2,200 others injured in the defeated coup, which the Turkish government said was organized by followers of Fetullah Gülen, the Gülenist terror group (FETÖ) leader who lives in self-imposed exile in Pennsylvania, in the U.S.