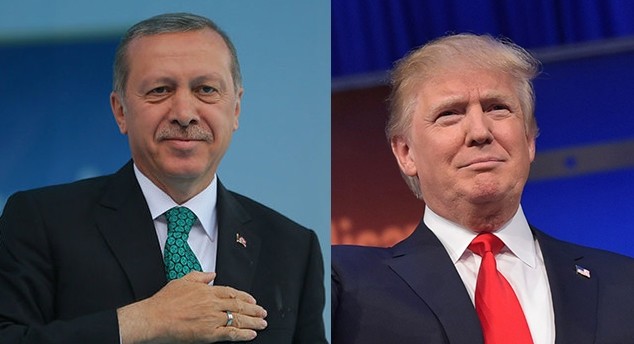 President Recep Tayyip Erdou011fan (L) and his US counterpart-to-be Donald Trump
by Daily Sabah with Agencies Nov 09, 2016 12:00 am

President Recep Tayyip Erdoğan has congratulated the U.S. President-elect Donald Trump late Wednesday in a phone call, where he reiterated Turkey's commitment to its fight against terror and its collaboration with the United States.

Erdoğan said that Turkey and the U.S. were allies who had "mutual respect, mutual profits and shared values," the source added.

The president later also tweeted, "I congratulate @realDonaldTrump on being elected as the 45th president of the US and look forward to further strengthening our relations."

Earlier in the day President Erdoğan had expressed his hope that Trump's election would lead to the good of the American people.

"I hope the choice of the American people will lead to good steps for basic rights and freedoms, democracy and the future of our region," Erdoğan had previously said, adding that he intends to keep that view on the positive side.

Donald Trump was elected on Tuesday, in an astonishing victory for a celebrity businessman and political novice who capitalized on voters' economic anxieties, took advantage of racial tensions and overcame a string of sexual assault allegations on his way to the White House.