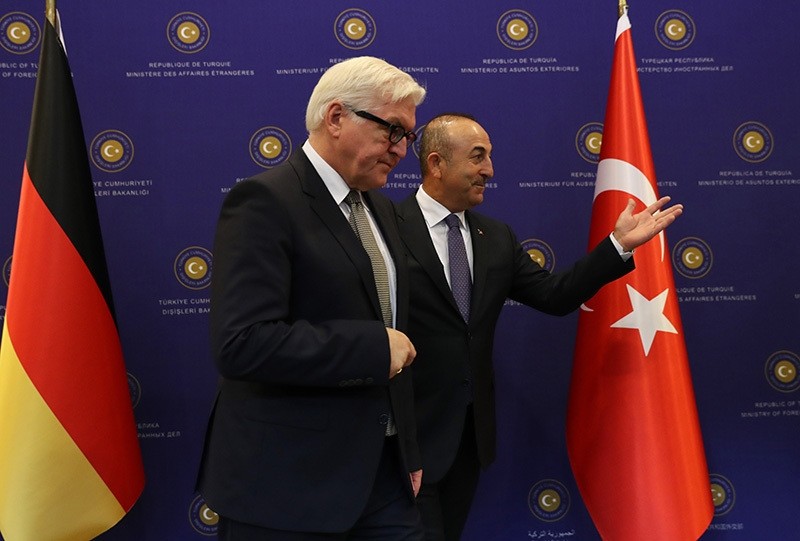 European capitals should not decide on whether to end accession talks with Turkey, it should be Turkey that should decide on the matter, German Foreign Minister Frank-Walter Steinmeier said in a joint press conference with his Turkish counterpart Mevlüt Çavuşoğlu in Ankara.

Steinmeier, who arrived in the Turkish capital early on Tuesday, will conduct talks amid a diplomatic spat between the two countries and tense relations between Ankara and Europe.

Steinmeier also said he was against the European Union breaking off accession talks with Turkey, a crucial partner for the bloc in stemming the influx of migrants from the Middle East.

Turkey is "fed up" with the condescending attitude of the European Union in the country's accession talks with the bloc, Çavuşoğlu said.

Turkish foreign minister said there were legal cases against 4,500 members of the PKK terror organization in Germany but only three of them had been sent back to Turkey.

People of Turkish origin, Turkish diplomatic missions in Germany are being attacked by PKK sympathizers, Çavuşoğlu added, while noting the growing number of Gülenist Terror Group (FETÖ) suspects seeking asylum in the country after the July 15 coup attempt.

He also said it was up to the Turkish people to decide on the question of reinstating the death penalty, a move which would likely bring an end to the country's accession process.