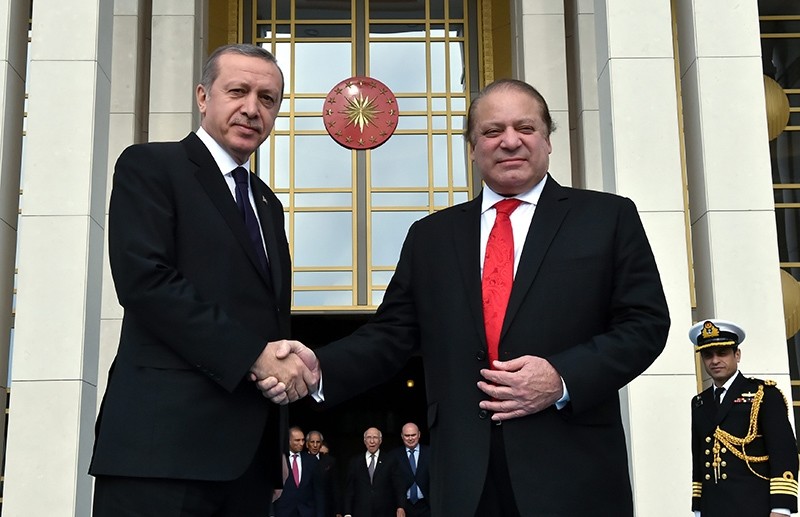 In this file photo from 03.04.2015, President Recep Tayyip Erdou011fan and Pakistani Prime Minister Nawaz Sharif shake hands in front of the Presidential Complex in Ankara (Sabah Photo)
by Daily Sabah with AA Nov 15, 2016 12:00 am

According to the sources, Erdoğan will hold official talks with President Mamnoon Hussain and Prime Minister Nawaz Sharif and will address the National Assembly of Pakistan in a joint session. It will be Erdoğan's second visit to Pakistan as president, and he has also previously paid several visits as prime minister. The President will also attend a meeting with businesspeople and Prime Minister Sharif, and will visit Lahore afterwards.

Erdoğan will fly to Uzbekistan on November 17 and hold official talks with interim President Shavkat Mirziyoyev and discuss regional and international developments with him. Presidential sources highlighted that Erdoğan's visit aims to develop and further strengthen relations and cooperation with both countries.

Turkey's ambassador in Pakistan told Anadolu Agency yesterday that a free trade agreement between Turkey and Pakistan will be ready to be signed in December.

The Turkish Ambassador in Islamabad Sadık Babur Girgin said Erdoğan will arrive in Pakistan today for a two-day visit. During his visit, bilateral relations will be discussed and a business forum between Turkey and Pakistan is planned.

Girgin confirmed the free trade pact will be ready for signing next month, adding, "This agreement will not be only for trade. It will include the service industry and investments." Additionally, the diplomat said Turkey is planning to invest in Pakistan in the fields of solar and wind power.

Separately, Girgin said Turkey has always favored a peaceful resolution of the Kashmir dispute. Kashmir, a Muslim-majority in the Himalayan region, is held by India and Pakistan in parts and claimed by both in full, as the two countries have fought three wars-in 1948, 1965 and 1971-since they were partitioned in 1947. Since 1989, Kashmiri resistance groups have been fighting in Indian-held Kashmir against Indian rule for independence, or for unification with neighboring Pakistan.