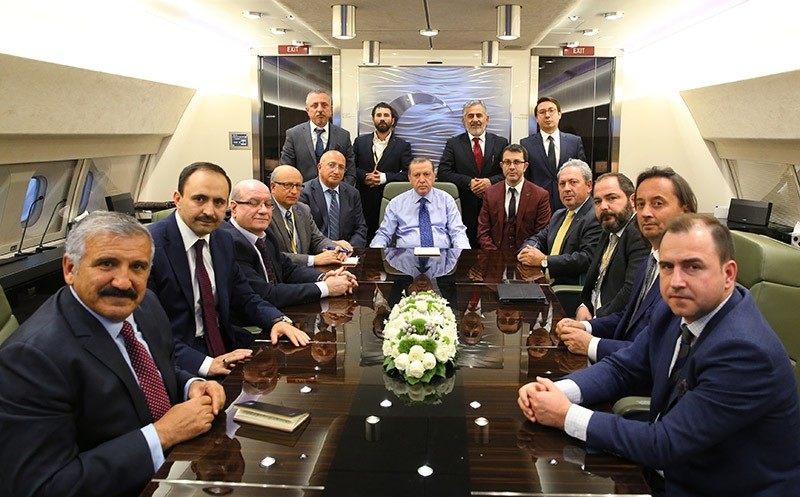 President Recep Tayyip Erdoğan has said that it was time for Turkey to openly think about alternatives to the European Union, suggesting the Shanghai Cooperation Organization (SCO), the economic, political and military organization that counts China, Russia and the central Asian republics among its members, as a perfectly plausible substitute.

While Pakistan and India are also currently in the process of becoming full members, Turkey is a dialogue partner.

Turkey has more options than tying its entire future to the EU, President Erdoğan said, speaking to journalists at the end of his official tour of Pakistan and Uzbekistan.

"I mentioned my desire for Turkey to become part of the SCO with [Russian President Vladimir] Putin and [Kazakhstan President Nulsultan] Nazarbayev. Iran also wants to get in. Putin said it was under consideration. I believe if Turkey became a member, its room for maneuver will broaden considerably," he stated.

Erdoğan described developments in the EU as ushering a new era for the future of the union.

"I see Brexit as an auspicious development. Similar things can happen in other countries. There is grumbling in France and also in Italy," the president said.

Erdoğan continued to say that a united stance among EU members was a thing of the past, citing last week's Foreign Ministers' Summit in Brussels he said, "They gathered with some urgency and no one besides Austria said anything about suspending Turkey's membership negotiations."

He noted Turkey's first application to become a member of what was then known as the European Economic Community (EEC) in 1963, adding, "The EU has been procrastinating for 53 years. Can anyone accept such behavior? When I first became the prime minister [2003], the EU invited us to the leaders' summit, and then they stopped. Why? Because we spoke openly. Ever since Sarkozy became the president [2007-2012], several membership negotiation chapters were opened but none were closed. If you are not going to conclude them, why open them in the first place?"

He furthermore criticized the EU for dragging its feet on lifting visa restrictions for Turkish citizens.
"People from Latin American countries do not need visas, but Turks do," he said, adding that the migrant deal that entailed a readmission agreement and visa liberalization would be rescinded if all clauses of the deal were not applied.

When asked if there was nothing encouraging emanating from Europe, Erdoğan said, "It is impossible to comprehend them."

He said that European leaders never saw Turkey as a future member.

"From time to time, we see insults directed at myself, claims that there was no freedom of expression in Turkey. Meanwhile, Terrorists prance around in French, German and Belgian streets. This is what they understand of freedom," Erdoğan added.

President Erdoğan also touched upon the continuing Free Syrian Army (FSA) offensive toward al-Bab with Turkish support, saying, "They are 2 kilometers away from al-Bab. We want the FSA to move east, toward Manbij afterwards because we need to push the PKK-affiliated Democratic Union Party (PYD) and People's Protection Units (YPG) out of there. There is one fact everyone needs to understand. Manbij is an Arab city. It cannot be occupied by the PYD-YPG."

Erdoğan also emphasized that the government still believed in granting Syrian refugees Turkish citizenship, nevertheless, he said that information needed to be compiled on prospective citizens in order to protect the country's security.

"If such a step is taken haphazardly, there may be very dire consequences," Erdoğan stated.

NO RESPITE IN FIGHT AGAINST FETÖ

There were some officials who failed to comprehend the threat posed by the Gülenist Terror Group (FETÖ) after the judicial coup attempt in Dec. 2013 aimed to topple the government, Erdoğan said, adding that no one could have such doubt after military coup attempt last July 15.

"If everyone had truly grasped the danger after Dec. 2013, the July 15 coup attempt may not have happened," he said, adding that ever since he first became prime minister, he has constantly voiced his concern over the FETÖ's broad prep school network for university admissions and the need to shut them down.

"However, our education ministers including the current one, Nabi Avcı, have failed to address this matter. These prep schools have also shown us that our high school system has failed to help our students prepare for the university admissions tests," he said. "What happened when we closed them down? Nothing. Poorer parents no longer need to spend so much money on their children to be better prepared for the test. We ask people to open better high schools rather than prep schools. But does FETÖ accept that? No. Because they have different priorities, they steal the admission test questions and distribute them to their recruits."

Hundreds of officials linked to FETÖ face charges of cheating in official recruitment tests and university admissions examinations. Erdoğan also turned down criticism that there were too many people being dismissed.

"Some say 100,000 people have been dismissed. Those who commit a crime need to pay the price and we say to those who came to Turkey to criticize us not to interfere with our internal legal affairs," he stated.

Some Turkish officers who were formerly appointed to NATO posts are currently seeking asylum in Western countries. On this matter, Erdoğan informed that the numbers of such people were not too high saying, "No NATO country can grant such people recognized as terrorists by an ally asylum. We want them to be extradited. How can a NATO ally grant asylum to traitors, coup plotters and terrorists. We asked Greece to extradite the fugitives who fled there. [Greek Prime Minister Alexis] Tsipras said it would be done within 15 to 20 days. Unfortunately, it has been much longer than 20 days since then and we are still waiting. If we had done the same, they would have caused all kinds of trouble."

Erdoğan made clear that the historically close ties with Pakistan remained strong, as evidenced with their stalwart support for Turkey against FETÖ.

All teachers and executives working at FETÖ schools had until yesterday, Nov. 20, to leave the country. The schools, meanwhile, will be transferred to Turkey's state-run Maarif foundation.

Erdoğan added that at several official meetings Sharif has reiterated Pakistan's determination to do everything in its power to fight FETÖ.

Erdoğan underlined that the only unfortunate element in bilateral ties with the country was the trade levels between them.

The two sides had also agreed to expand ties in defense and energy industries, and in culture. Erdoğan furthermore briefed journalists on substantial infrastructure projects in Pakistan undertaken by Turkish companies as the two sides agreed to sign a Free Trade Agreement to bolster commercial ties.

On the troubled Pakistani-İndian ties, Erdoğan said, "Nawaz Sharif is a person who has good relations with the Indian government. We will speak about what we can do when we visit India. However, we need to acknowledge the fact that there are outside influences that do not desire good ties between these two countries. Unfortunately they succeed in sowing conflict. The same is true for Afghanistan-Pakistan ties. From Pakistan, through an arc of Iran, Iraq, Syria, Egypt, Libya, to Tunisia, there is tension."

On the second part of the tour, the Turkish delegation led by President Erdoğan visited Uzbekistan, which is currently engaged in an election process to pick a successor for Islam Karimov, the former president who passed away last September.

Erdoğan touched on the elections to be held on Dec. 4 and mentioned that the acting president, former Prime Minister Shavkat Mirziyoyev, was the frontrunner.

"Let us hope the new era ushered by the new president will see the flourishing of closer ties between the two governments. There are around 560 Turkish companies currently working in Uzbekistan. Moreover, Turkey was the first country to recognize Uzbekistan's independence," he concluded, saying, "The aim was to increase bilateral trade volume to $4-5 billion."