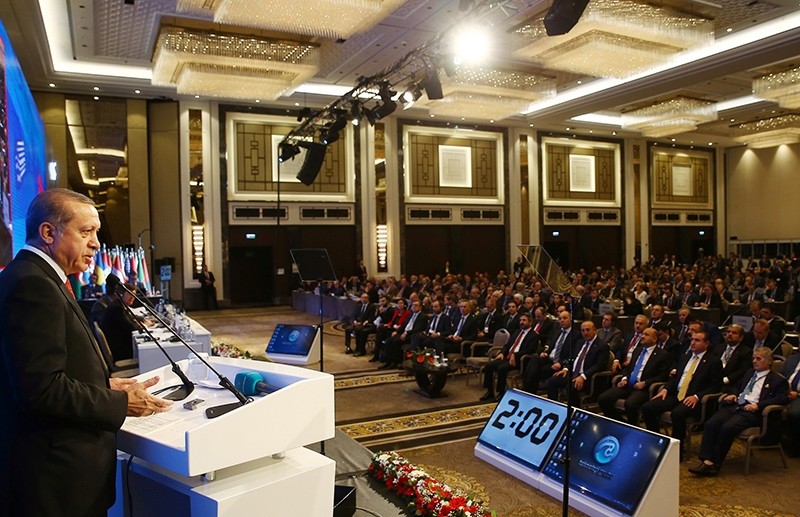 Turkey has reiterated its call to the European Union and NATO allies to take concrete measures against the activities of the PKK terror organization amid rise of activities by the supporters of the group in the member states, and urged for support to Ankara's fight against Daesh, PKK, YPG, and Gülenist Terror Group (FETÖ) as it acts as a block between terror groups and the Western world.

Addressing the NATO Parliamentary Assembly meeting in Istanbul on Monday, President Recep Tayyip Erdoğan said that Turkey acts as a barried between the threats posed by the terror groups and the rest of the world, as well as the influx of refugees, and continued by adding: "The support you provide to Turkey will add further strength to fight against terror organizations which target our shared security.

"Turkey act as a block between terror groups and the rest of the world, beginning with Europe. If we fail in this fight, meaning if this barrier falls, the terror groups will turn the world into a bloodbath, with a flood fire. We say, instead of weaken this barrier, let's strenthen it. Any support given to Turkey in fight against terror is a contribution that country's securing of its own future," President Erdoğan said.

President Erdoğan criticised the EU for turning a blind eye to the activities of the PKK terror group, including doing terror propaganda, recruiting, and racketeering within their borders, saying all allies states should take necessary concrete measures against the group.

The president's comments came amid recent pro-PKK rallies authorized by the EU member states across several cities, where the supporters of the terror groups were able to carry flags of the group, as well as posters with the photos its imprisoned leader, Abdullah Öcalan, despite the group being listed as a terror organization by the EU, the United States, and Turkey.

Ankara has long criticized the EU for being hypocritical on its stance on the PKK, arguing that the EU politicians rhetorical support to Turkey against PKK do not align with their practice and measures against the terror group. Erdoğan added that the EU should take into consideration the warnings given by Turkey against terror groups, as it has a long experience of dealing with them, or sooner or later the EU will be also fall victim and become targets of the terror groups.

"Terror groups use armament made by Western allies"

The president highlighted that Turkey has been the only country with successful results in its fight against Daesh terror group in Syria, while adding that it has also suffered the most from being targeted by Daesh, and also PKK's Syria affiliate YPG terror groups. President Erdoğan added that the weapons captured from the PKK militants were found to be provided by some of Turkey's Western allies.

"Do you know that some of the weapons captured from the groups we declared as terror groups in Iraq and Syria are produced by our allies? An we know these weapons so well, and we even possess their serial numbers. However, when we inform them [the allies], they do not bother caring. Some say they were provided during previous administrations. Others say we do not consider PYD/YPG as a terror group," Erdoğan said and criticized Turkey's allies for picking-and choosing between terror groups.

The U.S. administration has been providing military support to YPG-led Syrian Democratic Forces in northern Syria against Daesh, as it considers it the most effective partner in anti-Daesh fight. However, the Washington's support to YPG has been criticized by Ankara as it considers the group as a terror organization, due to its organic organizational links to PKK, and argues that the arms are ultimately used against Turkey. Moreover, Turkey sees the presence of YPG in northern Syria as a national security threat to its sovereignty.

On Sunday, Erdoğan criticized Obama administration's foreign policy on Syria, as well as the isssue related to the extradition of the U.S.-based FETÖ leader, Fetullah Gülen, to Turkey, during an interview with CBS News. The extradition has been a key issue straining Turkey-U.S. relations as Ankara blames Washington for turning the extradition issue into one that is political, rather an a legal one.

Meanwhile, the president commented on the U.S. presidential elections during an interview with the Israeli broadcaster Channel 2, saying the election results must be respected. Underscoring that the election results did not surprise him, Erdoğan the protests against Trump in some U.S. states and in different parts of Europe are 'disrespect to democracy.'

President Erdoğan reiterated that Turkey will continue its open-doors policy for the humanitarian purposes, namely for the refugees escaping the conflicts in its southern neighbors, Syria and Iraq.

"We have to keep our doors open to those running away from bombs. Why? Because they are human. We cannot leave those people to bombings," Erdoğan said and added that the Western stance on the humanitarian issues have been ineffective and insincere.

Turkey hosts about three million refugees running from violence and instability in Syria and Iraq, which has become an economic and political burden on the government. The influx of refugees into Europe, although in small numbers, has played into the hands of far-right populist movements, leading to the rise of anti-refugee and xenophobic tendencies, including violent attacks on foreigners and refugee shelters. Despite EU's promised financial support to refugees in Turkey, Ankara argues that aid has not arrived in effective amounts, only several hundred million euros, compared to what Turkey has spent from its own budget, which the officials claim to be over 10 billion dollars. Meanwhile, the president also reiterated Ankara's demand on creating a no-fly zone in northern Syria and urged the U.S. and other NATO allies to reconsider the request.

"I would just also remind us all of the fact that we are meeting here in Turkey four shorts months after the failed coup attempt," Anadolu Agency cited NATO Secretary- General Jens Stoltenberg saying during the 62nd session of the alliance's Parliamentary Assembly in Istanbul. "This should be a sober reminder to us all, a reminder that democracy and freedom cannot be taken for granted," he added.

"I want to salute them today for their courage and dedication to democracy," he said and added that the NATO allies will remain stand united against threats to any of its allies.

Speaking to TRT World, Daniel Kawczynski, a U.K MP for Shrewsbury and Atcham and a member of the foreign affairs select committee also said he had no doubts FETÖ was behind the coup attempt. Kawczynski also added that Turkey's loyalty to NATO must not be taken lightly. "Losing Turkey as a strategic partner would be disastrous for Europe," he said and added that EU's stance on Turkey's accession talks was embarrassing.