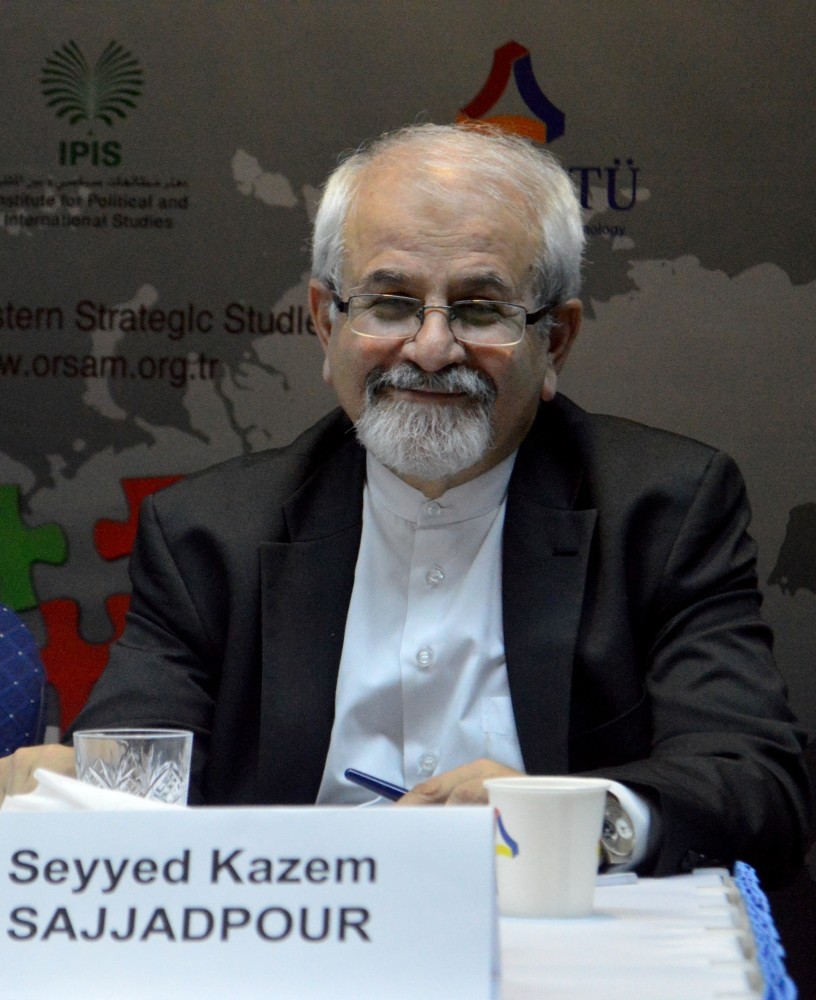 Speaking at a panel in Ankara, the Deputy Foreign Minister of Iran said Turkey and Iran are two significant actors in the region who can manage not only bilateral relations but also help resolve regional tensions

Iran's Deputy Foreign Minister Dr. Seyed Kazem Sajjadpour Wednesday commented on the complexity of Turkish-Iranian relations in a dynamically changing Middle East region, saying that Turkey and Iran are the most significant actors in the region, while criticizing the U.S. hegemony over the Middle East by saying that "the U.S. hegemony had failed."

He was speaking at a panel titled "Iran and Turkey in a Changing Middle East," organized by the Center for Middle Eastern Strategic Studies (ORSAM), Institute for Political and International Studies (IPIS) attached to the Iran's Ministry of Foreign Affairs and TOBB Economics and Technology University Department of Political Science and International Relations.

Sajjadpour focused on how the situation in the Middle East is changing and how those changes throughout the region are affecting Turkey-Iran relationship as well as on the ways how both countries can contribute to the developments in the region.

He drew attention to a few fundamental matters, including analysis of the ruptures in the region and the burst of the U.S. influence as well as the competition for narratives in the Middle East. While providing a review of the region, the deputy foreign minister for Research and Education and the president of IPIS, reminded people of the ruptures that the Middle East experienced over the last two decades, which he calls "rupture of Arab security order." Sajjadpour further noted that though the "ruptures are multi-dimensional," the second rupture to the region was "the U.S. invasion of Iraq."

"The rupture also became apparent in the international linkage with the region. There was an establishment of a notion on how the West, especially the U.S. is linked to the region where we see the indicator of the Obama administration as the rupture in this regard… I believe the U.S. still has not left the region and is still there. However, the idea it created led to a rupture in the established mentality," he added.

While Sajjadpour reaffirmed that no single actor in the region can be disregarded, he also stressed that none of the actors can impose hegemony.

"The U.S. hegemony is impossible. The U.S. made many efforts to impose its hegemony in the Middle East for the last 20 years and it failed. Even the U.S., with such a military mind, cannot impose hegemony," he said.

Underlining that Turkey and Iran are the most significant actors in the region, besides Saudi Arabia and Egypt, Iranian Deputy FM said the two countries are able to "really manage not just bilateral relations but can manage more regional perspective in efforts to develop and evolve."

Drawing attention to the comprehensiveness of the Turkish - Iranian relations, which are rooted in history, Sajjadpour said, "It has all the possible components of bilateral relations… There is no secret that we have disagreement over Syria but even on that issue we have two dimensions as on one of them we have agreed to disagree, and the second can do no damage to the existing relationship."

In the meantime, Dr. Meliha B. Altunışık the vice president at the Middle East Technical University also stressed on the failure of the U.S. hegemonic order in the Middle East while noting how the dynamically evolving and changing region has led to increased polarization.

In addition, Altunışık emphasized the fact that the key to understanding this region was through comprehending Turkey-Iran relations. She reminded that there is continuity in Turkish - Iranian relations and noted that there is always an element of dialogical competition despite "an element of mistrust and misperception."
Last Update: Dec 01, 2016 1:19 pm
RELATED TOPICS