Turkish, Russian PM's highlight troubles in relations are over 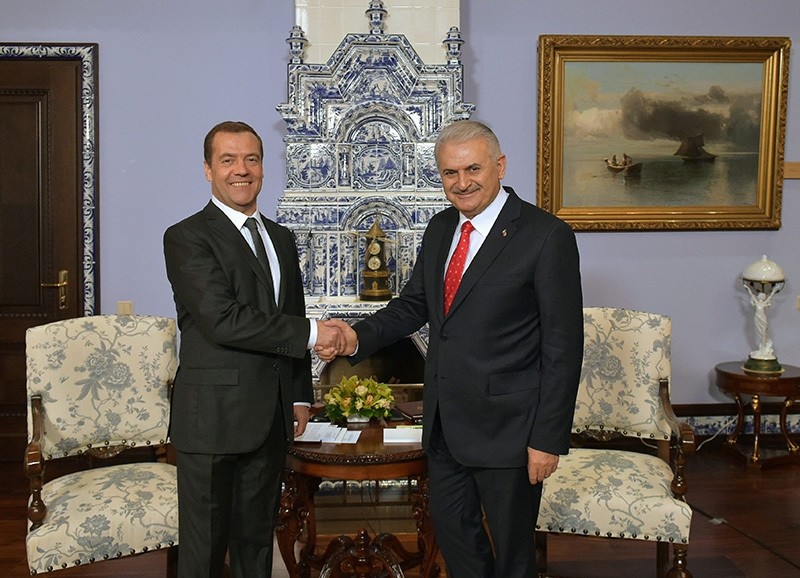 Prime Minister Binali Yıldırım and his Russian counterpart Dimitry Medvedev Tuesday said the two countries were ready to put behind the troubled period that dragged down their relations and will continue to strengthen ties and increase cooperation to solve the Syrian crisis.

Speaking at a joint press conference in Moscow, both leaders said their meeting focused on cooperation in various fields including the Syrian crisis, anti-terror measures, as well as energy and trade.

In reply to a question on the latest situation in Syria, Yıldırım said he thinks a solution in the country was much "closer than it was in past." The Prime Minister also said Turkey aims to prevent all threats stemming from terrorist organizations including Daesh, the PKK and PYD, as well as making it possible for refugees to return safely to their country.

Responding to a question by a Russian journalist who asked whether Turkey was completely secure for Russian tourists, PM Yıldırım said all kinds of measures were taken for the security of tourists and it is much safer now than any point in the past.

"Terror threats are present in every country. But, it does not mean we wouldn't take necessary measures against it. There is more effort on the issue now compared to the past. We support physical precautions along with intelligence sharing. Hosting our visitors in the best way possible and safety for them is guaranteed under the Turkish state," he said.

Pleased to meet his Russian counterpart, Yıldırım said, "We all see that a year of unfavorable relations have come to an end. Capitalizing on the experience we have gained over the last year, we plan to further improve our relations on a strategic level." Recalling the August meeting between President Recep Tayyip Erdoğan and Russian President Vladimir Putin that re-initiated the normalization process, Yıldırım added, "We have had a difficult year in terms of our relations, but those days are over now. We aim to bring our ties to a more advanced level than November 2015 and speed up the normalization process." During his speech, the prime minister highlighted the economic partnerships with Russia, mentioning the meetings in which Turkish and Russian ministers were present covered economic relations in areas such as energy, transportation, tourism, culture and agriculture.

​"We have the will to further improve economic relations, as the long-standing Turkey-Russia relations demand. The important thing is to act upon that will," he said.

Removal of mutual sanctions, easing entry and exit and strengthened trade relations will further improve ties, Yıldırım indicated. With regards to tourism, he said the aim is to restore tourism activities between the two countries. He also added, "There is not a single problem that we cannot solve on the basis of the friendship between the Turkish and Russian peoples."

Medvedev underscored that a difficult period in ties between Russia and Turkey has ended, stating that normalization has gained momentum. "Because of economic and political reasons, the trade processes between the countries have been suspended, but we believe the joint mega-projects must be completed. Today's meetings aim to speed up economic and cultural relations and investments."

Delivering a speech at the Moscow State Institute of International Relations (MGIMO), Prime Minister Yıldırım addressed the growing economic cooperation with Russia, particularly in energy. "Particularly in energy supply security, Turkey and Russia have a great interdependence. In addition to the Blue Stream and Nord Stream, the TurkStream project we are about to launch, and our partnership in nuclear energy will shape the future of energy. By the 100th anniversary of the foundation of the Republic of Turkey in 2023, we plan to operate the first nuclear power plant in Akkuyu," the prime minister said.

The TurkStream project, first announced by Vladimir Putin in December 2014, but suspended following the shooting down of a Russian military jet by Turkey in November 2015, was signed during the World Energy Congress in Istanbul by Erdoğan and Putin, marking a historic step toward speeding up the normalization process of ties between the countries. The pipeline to be constructed as part of the project will transmit Russian natural gas to Europe through Turkey, making Turkey a global energy base.

President Erdoğan signed the bill to ratify the TurkStream natural gas pipeline project on Monday; it had already been ratified by the Turkish Grand National Assembly on Dec. 2, 2016, before Prime Minister Yıldırım left for Russia. During his speech at the press conference, Medvedev marked this speedy ratification process of TurkStream as a very important step and confirmed that Russia will also act swiftly to approve the project. He also explained the strategic importance of Turkish Stream to protect European consumers from potential risks regarding energy supply.

With regards to the Akkuyu Nuclear Power Plant project, Medvedev recalled that the project was developed during his visit to Turkey in 2010, and announced that it was designated the status of strategic investment, which will facilitate foreign investment in the project and accelerate the construction phase. In accord with Yıldırım, Medvedev confirmed that the first phase of the project will be completed and start operating by 2023, marking the 100th anniversary of the foundation of the Republic of Turkey. He also announced the foundation of a joint investment fund that will finance the joint mega-projects as well as projects in third-party countries.

During his speech Prime Minister Yıldırım also explained other economic areas of collaboration, including agriculture, transportation and infrastructure. Talking about the "Black Sea ring highway" project, within the framework of Black Sea Economic Cooperation, he confirmed 400-500 kilometers (248-310 miles) of the highway will be built within Turkish borders. The project aims to foster trade, tourism, and transportation investment among the member states of the Organization of the Black Sea Economic Cooperation by connecting them with a 7,000-kilometer-long ring highway. The project to span the countries on the shore of the Black Sea will further improve ties among the countries and increase wealth, Yıldırım emphasized.

Yıldırım also highlighted that many Turkish companies undertake common projects in Russia. Recalling that the 2018 FIFA World Cup will take place in Russia, he stated that Turkish contractors have constructed a stadium in Krasnodar, which has been named one of the world's exemplary projects.

Relations between the two countries soured in November 2015 after Turkish jets downed a Russian Su-24 bomber near the Syrian border for violating Turkish airspace. Turkey provided radar data showing the Russian planes had breached the border while Moscow insisted that the warplane did not.

In the wake of the crisis, Erdoğan and Putin exchanged harsh criticisms and ultimatums while the Kremlin directed accusations at Ankara and imposed sanctions on various Turkish sectors.