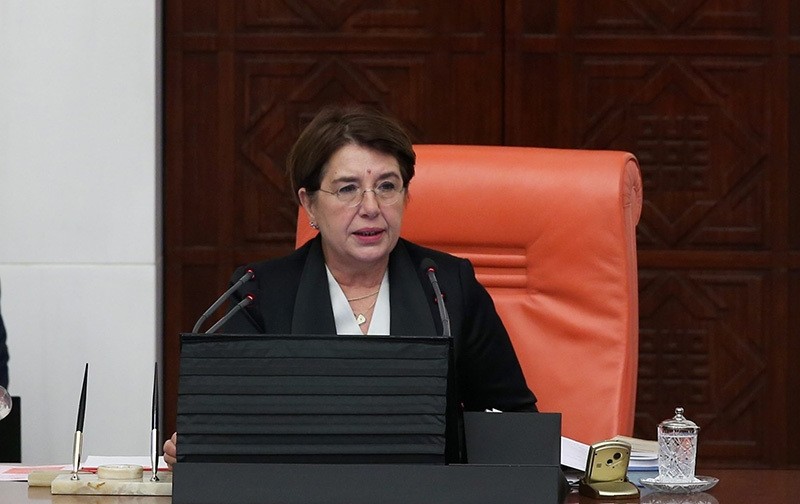 The mistreatment of Deputy Speaker of the Parliament Ayşenur Bahçekapılı by German officials was held as a ‘diplomatic discourtesy,' forcing the Turkish foreign ministry to summon the German ambassador to Ankara

The scandalous treatment of German security officials against the ruling Justice and Development Party's (AK Party) Deputy Parliament Speaker Ayşenur Bahçekapılı and her delegation is receiving strong criticisms from politicians across Turkey as President Recep Tayyip Erdoğan stressed in remarks made only Wednesday that "[Germany] is allowing the entrance and harboring of terrorists but holding down this country's deputy parliament speaker and her delegation for hours. Should we not respond with the same treatment?"

The AK Party deputy, during her visit to Germany's Köln, had her purse stolen, which contained all her identity cards along with her passport, in the hotel lobby where she was staying. Though she contacted the nearby police station immediately, Bahçekapılı told members of the media in parliament that "They [German security officials] merely took my statement even though I have told them that I am a deputy and parliament speaker. The process also took hours." Due to the negligence of the German police officers, Bahçekapılı said she went to the Turkish consulate in Köln and had her temporary diplomatic passport issued.

"When I arrived at the airport to return [to Turkey], I faced what I can completely describe as a scandal. The police detained me and did not accept my temporary diplomatic passport despite my telling them that I am a member of parliament and deputy parliament speaker as they said 'it is not our concern.' They took me and my elder sister who was with me at that moment to the police station in the airport," AK Party's Bahçekapılı said. She also mentioned the long hours spent waiting at the airport and said, "I then cried out saying, 'if this is the EU that you are offering us then we do not want the EU.' Then the police tried to keep us quiet and threatened by saying, 'If you do not be quiet then we will detain you.'"

Commenting on the matter, Enes Bayraklı, an academic and a foreign affairs specialist, told Daily Sabah that "it is an example of unacceptable diplomatic discourtesy. It also shows the extent of the racism and Turkophobia in Germany." Bayraklı further noted that there is no example of such incident happening against someone who is clearly and evidently a member of the Turkish Parliament. When Daily Sabah had contacted AK Party deputy Bahçekapılı yesterday regarding the traumatic incident, she did not feel further comments were necessary as the details from the incident in Germany are already being perceived by politicians and the public as clear evidence of the widely increasing racism, Islamophobia and Turkophobia throughout European states.

However, President Erdoğan in his remarks yesterday strongly criticized the incident and said, "You take terrorists in your country and harbor them but hold down this country's [Turkey] Turkish Parliament's deputy speaker and the delegation for hours there. Shall we not do the same against them...? If you do this kind of misconduct against a female deputy then I have to also respond in the same way… All the terrorist are there wandering around in EU member states. Why are you allowing these terrorists to wander around your countries…? We will continue to conduct our own strategies against them [the EU]." In addition to President Erdoğan's criticisms, AK Party's Istanbul deputy Metin Külünk said on his personal Twitter account that"The same reciprocity rules should be applied and the same behavior be shown within our borders to Germany and German deputies, for showing such disrespect to our deputies." Analogous to AK Party's deputies'criticisms, the main opposition Republican People's Party (CHP) Group Deputy Chairman Özgür Özel said on Tuesday evening in parliament that"All members of parliament especially the representatives of parliament speakers, are representing the Parliament and Turkey. We find the forcible detainment of a [Turkish] deputy and such maltreatment outside of diplomatic courtesy as unacceptable."

Meanwhile, the German ambassador was summoned to the Foreign Ministry on late Wednesday to provide information about the treatment that Deputy Parliamentary Speaker Ayşe Bahçekapılı received in Germany. Turkey conveyed its protest in the face of the treatment of German Ambassador Martin Erdmann.