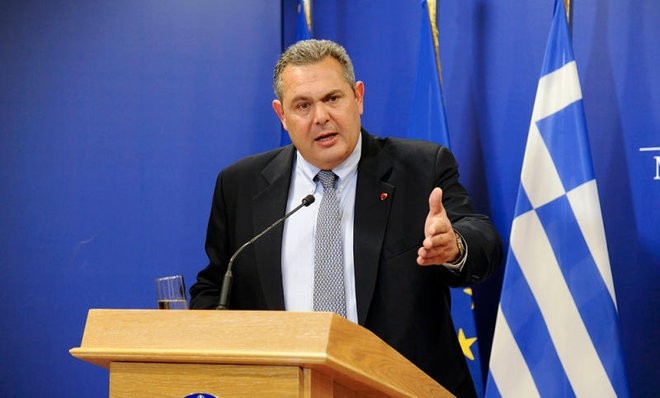 Turkey slammed Friday the Greek defense minister's recent remarks about Turkey, calling on Panos Kammenos to act in a manner "befitting the dignity of his position."

Inviting Kammenos to "refrain" from making such statements, the defense ministry called for concrete steps from the Greek side to strengthen cooperation and mutual understanding between both countries.

Stating that Kammenos's remarks "lacked manners, reason and responsibility," the ministry said the Greek minister's attitude was harming efforts to promote cooperation between the two countries in a period when both sides were trying to establish bilateral and regional agreements.

"We are returning his expressions back to him," said the ministry.

In the past days, Kammenos had caused anger in Ankara with a statement concerning Erdoğan's recent Lausanne comments when he said "Lausanne is not an indisputable text for Turkey, in no way is it a holy text."

Kammenos later on said: "If Erdoğan wants to annul the Lausanne Treaty then we can return to the Treaty of Sevres."

The 1920 Treaty of Sevres was the Allies' attempt to divide and share Ottoman territory after World War I however, it was rejected by the Republic of Turkey and did not come into effect. Later on the 1923 Treaty of Lausanne was signed, finally concluding WWI.

Kammenos' remarks came in response to Erdoğan, who said late September that Lausanne was indeed not a "victory" but a "defeat," and Ankara had left the Aegean islands to Greeks as part of the treaty.

Greek Prime Minister Alexis Tsipras had also reacted to Erdoğan, saying that questioning the Treaty of Lausanne -- which established today's boundaries between the two countries -- was threatening bilateral relations.

The Greek statement said the sovereignty of Greece over its Aegean islands, including the Imia islet, "is unquestionable and guaranteed by international law."

"Irresponsible reports to the contrary are challenging because the status of the islands and islets of the Aegean is clearly determined by a number of International Agreements in the last century.

"Whoever ignores this international legal reality does not contribute to the strengthening of good neighborly relations, and undermines them instead," it added.